It appears to be an annual tradition for me that January is all about re-charging followed by the slow process of emergence from hibernation and so for only my second gig night of the year, fittingly during Independent Venue Week, I headed back to Norwich Arts Centre for the visit of BC Camplight with support from our own Birds of Hell.

Around 8:20pm Birds of Hell kicked things off in front of a good-sized crowd whom they quickly won over. Locals needed no converting but BC Camplight clearly inspires passionate devotion from his fans (as I was to learn later on) and so there was a significant portion of the audience who had travelled from other parts of the country and were experiencing Birds of Hell for the first time. Pete and the rest of the band were all in terrific form and in their half hour set made a strong impression on fans old and new. They also highlighted a couple of new songs, the wonderful Sleaford Mods-esque M.E.U. – the Musicians Exercise Unit – with the boys all sporting headbands and exercise moves, and another song whose name escapes me that was equally impressive. They won a lot of new admirers and I heard many compliments and was delighted to see they’d practically sold all their merch. Birds of Hell were outstanding. 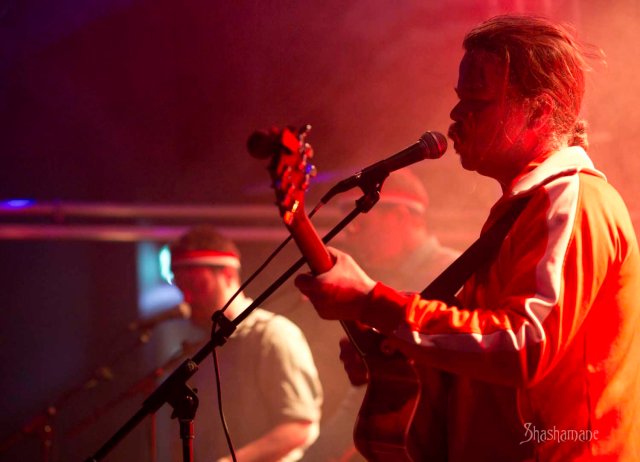 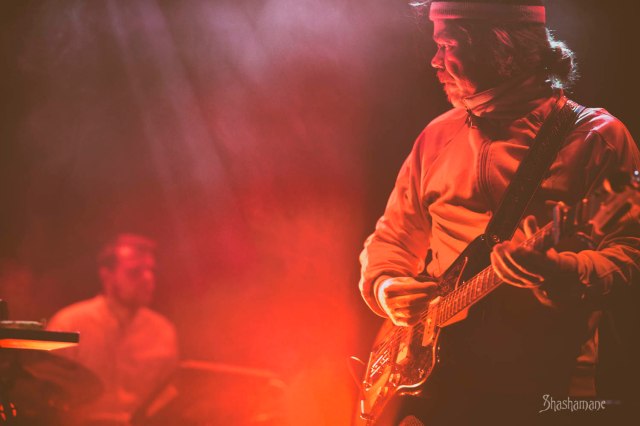 Catch Birds of Hell in Norwich again on 6 March when they play Karma for the Ideal Surreal/Peach Club Charlie/ Shane O’Linski gig.

People were down the front well in advance of the appearance of Philadelphian BC Camplight and band and there were those who seemed to know and sang along with every word of every song.  An impressive and charismatic chap, between swigs from the bottle of white wine he told us the story of his deportation from and subsequent return to the UK, putting it into song on Deportation Blues and indeed the rest of his impressive and varied set.

“BC Camplight is the moniker of maverick songsmith Brian Christinzio. The Philadelphian turned Mancunian is considered one of indie music’s most forward-thinking artists with a discography which acts as a soundtrack to a life rife with bad fortune, mental illness, running afoul of the law, and ultimately absolute redemption. Whilst living in Philadelphia Christinzio performed live with The War On Drugs in between releasing 2 critically successful yet commercially ignored records. He was also a coveted session pianist lending his talents to scores of albums, perhaps most notably Sharon Van Etten’s ‘Epic’.

After a period of homelessness and running on fumes creatively Christinzio made a move across the Atlantic to Manchester, UK in an effort take control of his life and reshuffle his musical deck. The result was the recording of 2015’s ode to Manchester and baroque pop tour de force “How To Die In The North”. The recordings resulted in a record deal with Bella Union Records and placed Christinzio on a path towards artistic fulfilment. However, a severe leg injury landed Christinzio in the hospital where he was forced to remain whilst his UK work visa expired. Despite pleas to the Home Office to allow the ailing artist to apply for an extension a decision was made that would forever alter Brian personally and artistically.

The day after his record was released Christinzio was Deported from the UK and banned from returning. “How To Die In The North” was essentially shelved. After 16 months of separation from the UK the resilient Christinzio was reunited with his beloved Manchester, gaining entry through newly acquired Italian citizenship. His most recent, and most lauded album “Deportation Blues” is an exhilarating dynamic document of calamity and stress, relayed through richly melodic arrangements spanning songwriter classicism, gnarled synth pop, 50’s filth-rock, and various odd junctions in between mirroring the creators fractured mindset. It is an immensely powerful diary chronicling an impossible set of life circumstances whilst shining a white-hot spotlight on the composer’s off-kilter brilliance. The album has since been revered by critics, become a stalwart on the BBC Radio 6 Music playlist (BBC 6 Music 2018 album of the year as voted by Marc Riley), and put BC Camplight back on the stage where he belongs.”

With a slew of tours and festivals on the horizon Christinzio, a remarkably relentless entertainer, will bring his immense new live show to the UK and Europe. “It’s no fun giving an audience a standard show that they can get elsewhere” explains Christinzio. “Sometimes it’s intense, sometimes it’s emotional, sometimes it’s basically a fucking stand-up routine. I always like to involve the audience and make it memorable for everyone involved. I think we are one of the best live bands in the world and it’s an odd feeling finally getting an opportunity to get in front of loads of ears and eyes. In a perfect world I’d be able to organise a concert on the roof of the Home Office one day”.