Almost two and a half years since they played a blistering gig in the same venue Jim Jones and the Righteous Mind made a welcome return to the Norwich Waterfront Studio and blew the roof off once again. 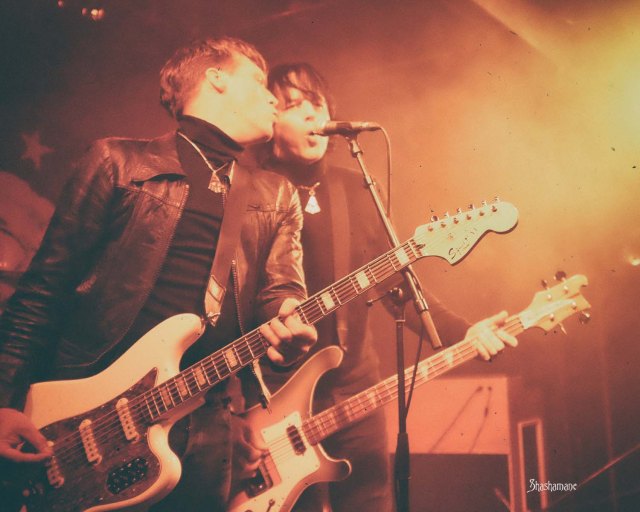 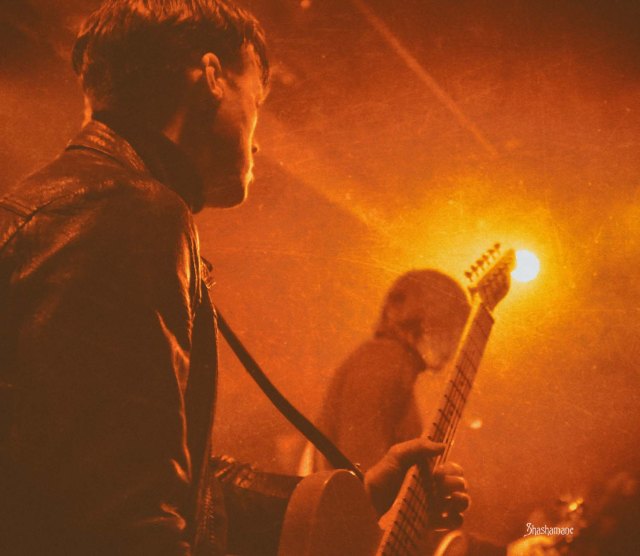 On that occasion support was from Beast With a Gun, this time it was another of my favourites, Ravenous Hounds who of course feature a couple of members who also play in Beast With a Gun. Powerful, loud and impressive with a great energy, I love hearing them and their garage punk rock featuring guitars, drums, synths and sax. They were the perfect start to an evening of heavy rock and roll and set the tone. Some in the audience were hearing them for the first time and I know that those I spoke to afterwards were impressed, as everyone always is. Their excellent recently released album is available here. 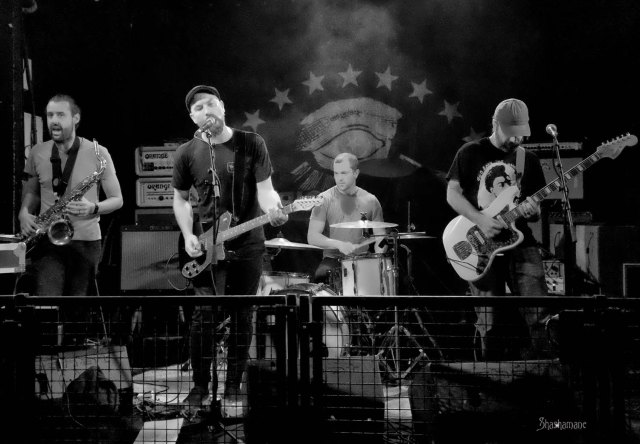 Jim Jones and the Righteous Mind went straight into it, they look every inch the part and these rock ‘n’ rollers were absolutely phenomenal and gloriously loud. Dirty and heavy with tinges of garage rock, psych, voodoo and blues this five piece were compelling from beginning to end … and I’ve never seen a pedal steel played in such a rock fashion, along with the guitars, bass, drums and keys! Great stuff.

Touring new album CollectiV this was actually billed as the Get Down Get With It Tour alongside the limited edition pink vinyl 7″ of this classic known also famously by Slade and Little Richard. To hear Get Down Get With It live and loud and stompy was a brilliant treat.

Another superb cover in the set was The Beatles’ Helter Skelter which was gloriously wild, they clearly had a blast playing it. Great scenes in the Studio with band and audience on the same wavelength and go-go dancer Moana Santana from LA at the side of the stage. 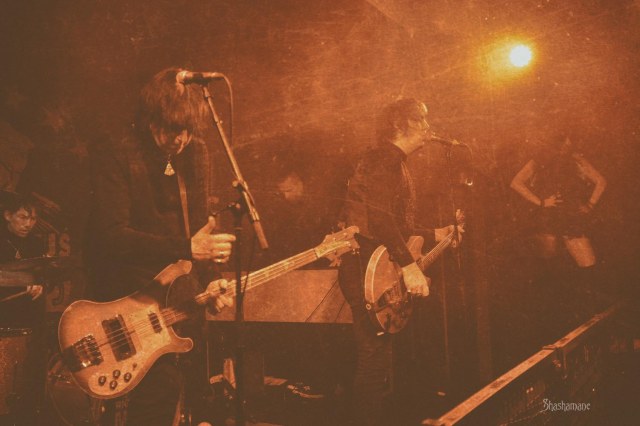 During an epic Base is Loaded both Jim Jones and guitarist Malcolm Troon disappeared off into the audience only to resurface at the far end of the room on the bar!  This was such a cool moment in a stunning gig. I think they enjoyed it as much as we did, the following day posting this on Facebook: “Oof! You know it’s been a good night when even the security team tell you how much they enjoyed show and how everyone was talking about it on the way out! Norwich – you were absolutely fantastic last night!”  There aren’t too many like Jim Jones about these days so gigs like this and bands like this are to be cherished. One of the best live acts around, if you get the chance, see them! This was one of those memorable nights where for a couple of hours you forget about everything outside of these four walls (there was no roof by the end of it), dirty punk rock ‘n’ roll at its best. Cathartic and energising, just what was needed and people were buzzing as they filed out of the venue. 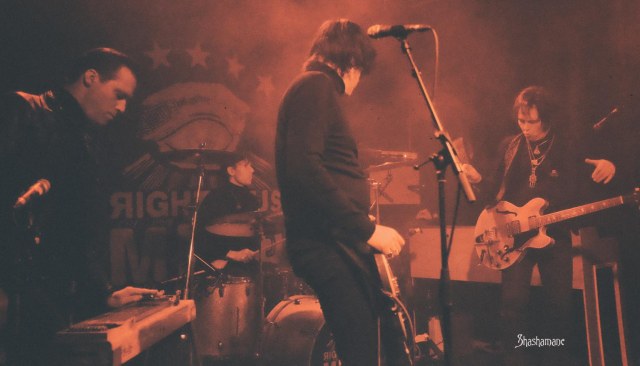 “With his latest incarnation a hefty dose of voodoo has been stirred into the pot of Jones’ own particular sonic gumbo, and it’s a heady brew.” – The Arts Desk

“Hot on the heels of 2018’s successful reunion with garage-psych testifiers Thee Hypnotics, singer/guitarist Jim Jones returns to give 2019 the kick-start that it so urgently needs with his current band, Jim Jones & The Righteous Mind, and the release of their incendiary second album, CollectiV.”

“Jim Jones & The Righteous Mind’s debut album, Super Natural, was rightly showered by the kind of hosannas most bands merely dare dream of, while their legendarily highly-charged live shows have left audiences breathless across the UK and Europe.”

“Often found in the thick of the action, Jim Jones has worked his mojo through memorable performances on Later with Jools Holland and Late Night with David Letterman, as well recording radio sessions for the likes of the BBC’s late, great John Peel, and Marc Riley. A seasoned veteran of the road, he’s shared bills with The Stooges, Jack White, The Cult, The Cramps and Grinderman and many more. And he’s also spread the gospel of rock’n’roll with his own shows on 6 Music and Boogaloo Radio.”

“A rock’n’roll singer and guitarist of rare distinction, Jim Jones is a raconteur with one hell of a story to tell. You should hear it.” 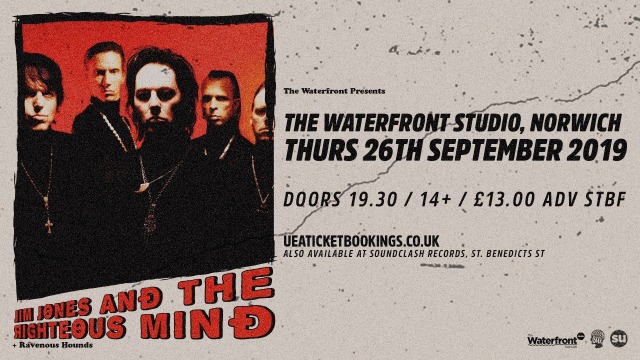 Despite being totally different genres and, one might think, demographics there was yet another Norwich gig-clash which did actually cause difficult and frustrating decisions for many with Jess Morgan also playing at the NAC on the same night and I know many who would have wanted to be at both, nevertheless the room really filled up here. I am sure the Arts Centre gig was also a wonderful night but my evening was at the Studio for the guaranteed-heck-of-a-night that Jim Jones and the Righteous Mind always provide.  As I and some friends made our way out at the end, clutching CollectiV vinyl under our arms we bumped into Jim Jones at the top of the stairs so had a chance to thank him personally, with handsakes all round.

On the way home I stopped off at The Walnut where Peter T’s open mic was still happening and had the pleasure of catching Becky Hazlewood, Jon Fennell and Evie, who closed things with a stunning version of Back to Black.

www.norwichblog.com www.shashamane.etsy.com www.facebook.com/ShashamaneArtPhotography www.facebook.com/NorwichLiveMusicPhotos you can find my prints for sale on Etsy at http://www.etsy.com/shop/shashamane?ref=si_shop and at Artfire: http://www.artfire.com/users/shashamane and www.facebook.com/ShashamaneArtPhotography
View all posts by shashamane →
This entry was posted in Becky Hazlewood, Best gigs, Jon Fennell, live music and dance, Ravenous Hounds and tagged jim jones and the righteous mind, norwich music city uk, Ravenous Hounds, waterfront studio. Bookmark the permalink.