Thanks to Outline Magazine and FolkEast I was back in Suffolk for this year’s FolkEast Festival.  My Outline review should appear soon but I’ll post a few photos here. 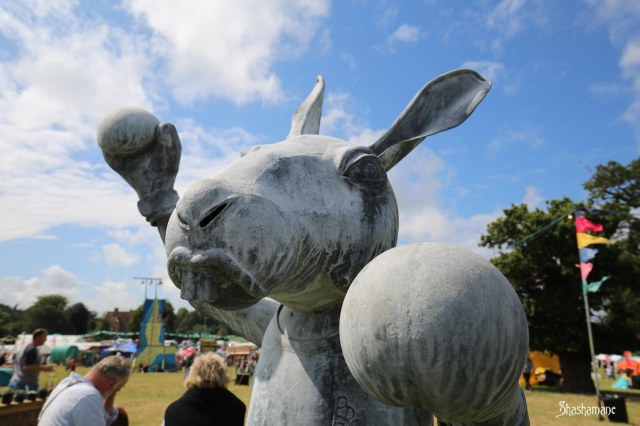 The weather threw in the odd rain shower but that didn’t seem to dampen things too much and if anything ensured all the covered stage areas were all at capacity. 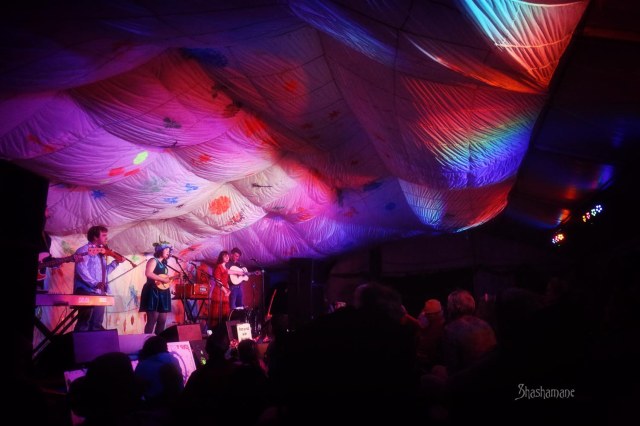 Tilly Moses at the Soapbox stage.

Great new discoveries for me were Good Lovelies from Ontario, Brasy from Poland, plus Tilly Moses and Katherine Priddy. 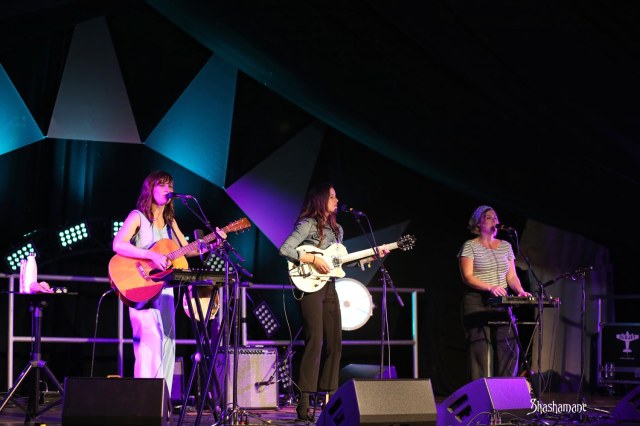 I spent quite a lot of time at the beautiful Soapbox stage in the woodland area and also enjoyed seeing Norwich acts Hot Raisin, The Tom Conway Trio, Nebula Sun, Lucy Grubb and Danny Whitehouse who all appeared there, as well as a couple of others who I missed. 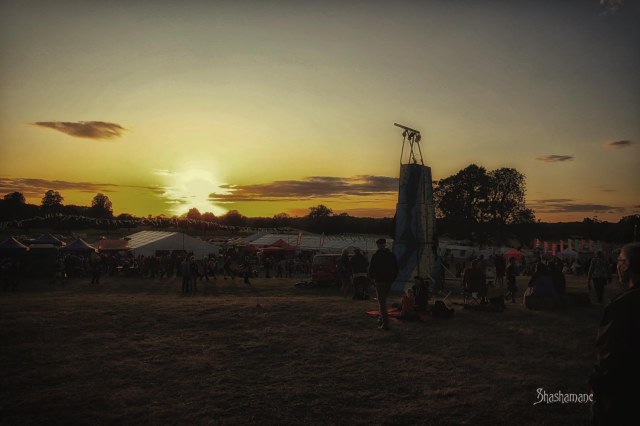 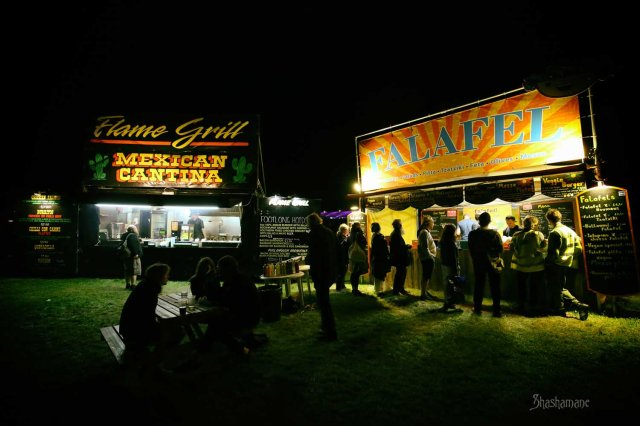 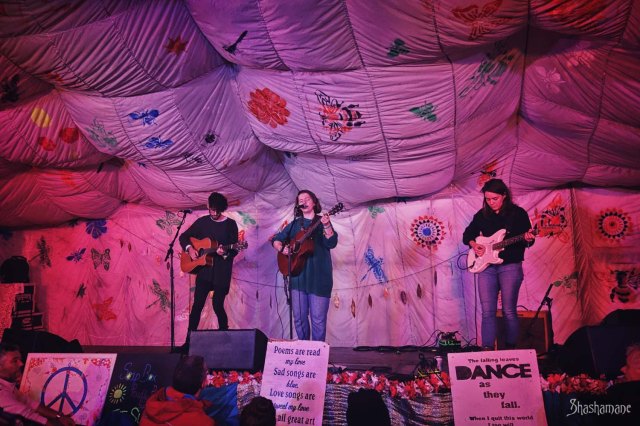 Hot Raisin at the Soapbox stage. 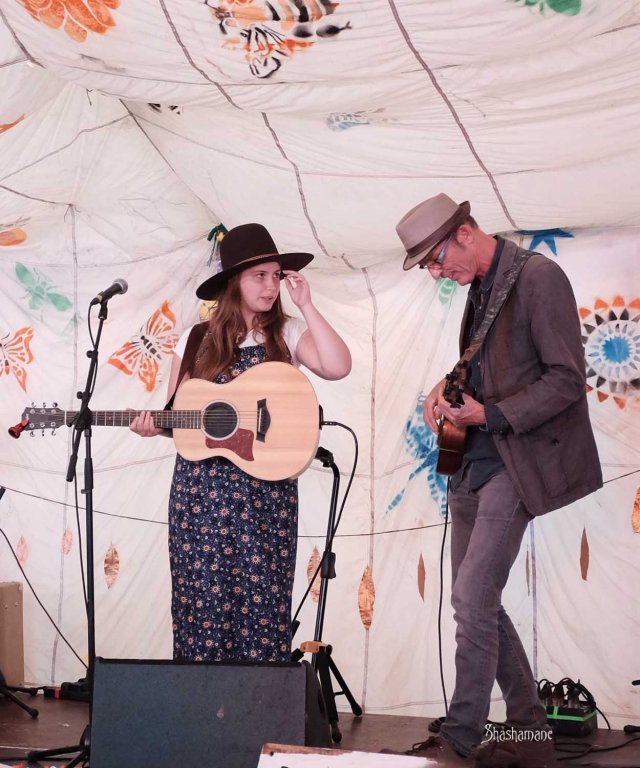 Lucy Grubb (and Kev) at the Soapbox stage.

FolkEast returned at the weekend, in the beautiful Suffolk grounds of Glemham Hall.

For full weekend ticket holders the festival actually got underway on the Thursday evening with warm-up music but I arrived Friday lunchtime and thankfully set up the tent just before the wind and rain set in. Calmness maintained as I did so by the sounds of Samia Malik‘s Urdu songs and poetry from the nearby Sunset stage wafting in the breeze.  The rain didn’t put too much of a dampener on things though as there was plenty of warm sunshine between the showers and opportunities to wander about. When the rain did fall all the covered stages were well attended as people also took shelter. My first port of call was to the Moot Hall for Ontario’s Good Lovelies. This trio totally charmed and delighted me with their gorgeous harmonies, stage presence, stories and songs with a message gently delivered. Coming in from the rain I soon forgot about the weather. Their energy reminded me of Rainbow Girls and I mentioned this to them afterwards, they said they love Rainbow Girls! What a great set to start the musical side of my FolkEast experience this year. They got a well-deserved standing ovation and so too did Brasy in the same space a little later.  An a cappella quartet from Poland performing a variety of songs from around the world, some familiar some less so, and largely with a nautical theme. “Song of the Volga Boatmen” was immense and later in the set they got the audience singing along in Polish for their version of “Wild Rover”, with varying degrees of success but the spirit and effort was always there from the audience. It was a lot of fun and they came closer to blowing the roof off the Moot Hall than the wind itself did, receiving a rapturous ovation. Word got around and it was no surprise the Village Hall tent was packed to see them again later in the festival. The damp weather meant there were a lot of painful knees in the audience – mine included – so a standing ovation was no mean feat! The Moot Hall sound was excellent but I can only imagine what they’d sound like in a building such as Norwich Arts Centre the acoustics of which would really suit them.

As well as the numerous music stages, dances, jams and relentless ceilidhs there were plenty of art stalls and workshops in the Art Arcade, and it was here I was pleased to be reacquainted with Izzy’s Daughter who was one of my highlights from last last year’s festival, this time though she was not performing but had her own beautiful macrame wall hangings stall and workshop. We talked about our mutual love of Georgian folk songs and this too was well-catered for at FolkEast, proving extremely popular with two vocal choirs and a Georgian singing workshop. The chapel hosting the Sanctuary stage was absolutely packed for a set by Buska Georgian Voices.

Much of the remainder of the evening was spent at probably my favourite spot of all at FolkEast, the atmospheric, magical and beautifully decorated woodland area hosting the Soapbox stage. It was a delight to see the ever-uplifting Hot Raisin playing here, the place was full and the sound superb. Band and audience connected effortlessly, the crowd even giving a rendition of Happy Birthday. This was well up there among my favourite Raisin gigs, and I’ve seen many.

The Soapbox stage and surrounding area is completely powered by a Solar Decker bus converting sunlight into solar energy, generating enough power for the whole of this section of the site, the lighting, PAs and even adjacent cinema, The Kinodome.  The entire festival is very green with people encouraged not to bring single use bottles, plentiful supplies of drinking water taps being readily available, and a team of litter-pickers meant this is probably the cleanest festival site I have been to.

Saturday was a better day weather-wise and also brought another opportunity to catch Good Lovelies on the Sunset stage in sunshine before heading back to the Soapbox where a handful of Norwich favourites were playing.  All of the eight or so stages are within short walking distances of each other yet there was no sound-bleed at all and the furthest walk was to the Sanctuary chapel and even that’s no more than ten minutes’ away, a pleasant stroll in itself.

As with most festivals it was impossible to catch everyone I had hoped to see but I was happy with the discoveries I did make and also loved the sets from those I already knew. This isn’t a festival to get stressed at, rushing from stage to stage or worrying about set clashes. Part of its great appeal is the relaxed and friendly vibe, bumping into friends, catching up and swapping tips of acts to look out for over a refreshingly priced ale outside The Hop Inn or any of the other bars scattered around the site.  A reasonable £3 for any of the wonderful local ales on offer, why can’t other festivals do this?

At various times over the weekend one could catch the likes of Richard Thompson, Cara Dillon, Sharon Shannon, Sheelanagig, Emily Mae Winters, Spinners Legends et al. but of the acts I saw for the first time I was particularly taken with Tilly Moses, Katherine Priddy and of course Good Lovelies and Brasy. Katherine Priddy has a beautiful and clear voice drawing one into her songs. She ended her set “in an act of rebellion” playing one her manager advised against as it did not fit with the rest. I’m glad she did, I loved this spirit and the song was a fine way to close.

Norwich was nicely represented too with strong sets by Alden and Patterson, Tom Conway Trio, Danny Whitehouse, Nebula Sun, Hot Raisin, Lucy Grubb (with full band and the most affecting live rendition of “Dear Walter” I have yet heard) and Tabernacle Dusk. Jack Pout hosted an open mic at the Soapbox and I noticed some familiar faces at the sound desk too, making everything sound amazing.  We had something of an Echoes in the Well reunion with guest appearances during Danny Whitehouse‘s amazing set whilst the afrobeat, jazz, reggae and soul infused folk of Nebula Sun with two saxophones was probably the least traditionally folky thing I heard all weekend but all the more welcome for that. They had people dancing, applauding the musicianship and smiling and nodding throughout. Very impressive.

Monday morning brought more warm sunshine and a slight breeze which was perfect for packing down the camp in the dry and as the campsite slowly emptied I could not see a spot of litter anywhere. Just as it should be. FolkEast is friendly, relaxed, safe and very clean.

The festival wound down on the Sunday night and the last thing I saw before getting into the tent was a shooting star in the clear night sky.

Many thanks to FolkEast and Outline Magazine.