It was in May of 1982 that having recently turned 18 cycled to the UEA and first saw Altered Images. Now, after a whopping 37 year gap I’m cycling to Epic and seeing them again, albeit with only Clare remaining from the original band and now working under the moniker of Clare Grogan’s Altered Images (though she is married to one of the members of that first line-up). I loved them to bits (and so did John Peel), they were the first band I met after an LCR gig and I was struck at the time at how friendly they all were. Clare especially was incredibly generous with her time and cheerfully signed everthing I had with me. Once again I was hoping there would be an opportunity to say hello here at Epic Studios and so I hopefully brought with me all the record sleeves of those classic Epic label recordings.

To open the evening though we had Pin Ups, a Norwich-London trio who seemed to come out of nowhere last year and are creating a bit of a buzz. They’re tight, bold, confident and powerful with strong songs and great energy. They revelled on the big stage at Epic, the sound was superb and they gained a lot of new admirers. Their next gig is a Norwich Arts Centre Regeneration fundraiser alongside Hex Friends and Wreck on 28 June, obviously at the NAC. 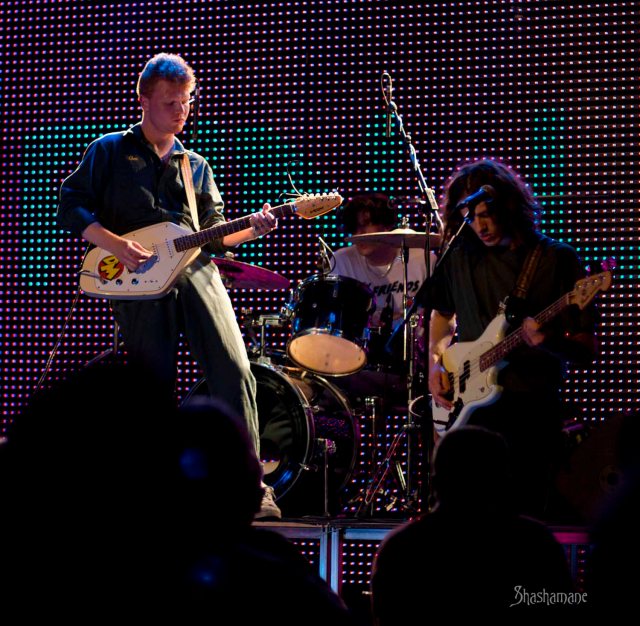 Pin Ups were almost certainly the youngest people in the studio and looking around I could not help feeling I was the exact average audience member in terms of age, this was, on the whole, a very specific demographic and there is absolutely nothing wrong in that. The crowd loved Pin Ups but were now excitedly getting ready for Clare Grogan’s Altered Images, and I must admit I was looking forward to it hugely too, and had been ever since the legend that is Rick Lennox announced this gig some months ago. 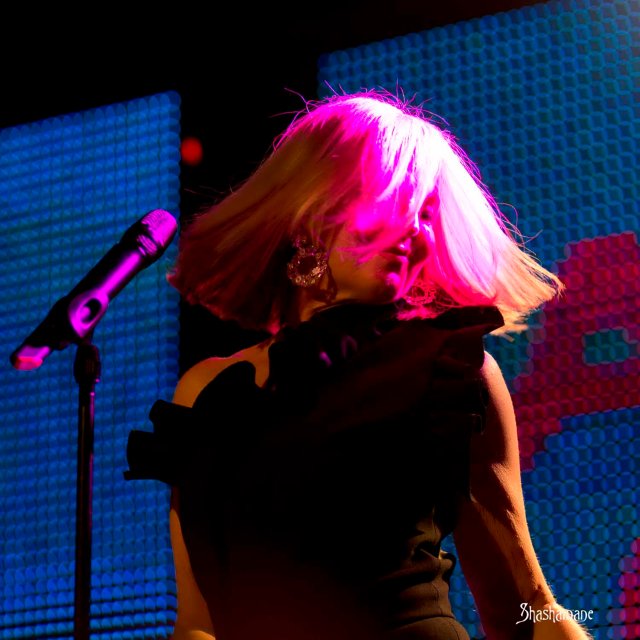 The atmosphere at this gig was just wonderful, I was beaming throughout and Clare’s warmth just shone through. In front of an illuminated pinky-blue backdrop the set started so strongly with I Could Be Happy and we very obviously all were happy.  After a couple of songs Clare confessed to us that she had lost her father three weeks earlier and that this was her “first gig as an orphan” after a difficult few weeks and if ever there was a sense of a huge, collective and spontaneous, heartfelt audience hug for a performer this was it. The sincere love and affection was palpable and Clare gratefully received it as this seemed to give her even more strength.

The hits kept on coming with Don’t Talk to Me About Love, See Those Eyes, Bring Me Closer and of course the song that Altered Images will always be identified with, the bouncy Happy Birthday (“The song that keeps on giving!” I get the sense she has fallen back in love with this song as she recognises how much it has helped her with its movie appearances over the years) and was such a celebratory way to end the set. The crowd were not going to let the night end yet of course and the set really did close beautifully with an encore of Love to Stay.

The band are excellent, extremely good, and there is an obvious cameraderie between them all. This was just such an enjoyable gig. Clare was engaging, funny, warm and every bit as charming and lovely as I remembered her from that 1982 Norwich gig. We’ve all gotten older and so we had stories of life and its trials but always done with humour and charm … and even some expletives, Clare and the audience clearly have a bond but she strengthened it every time she spoke with her openness, honesty, wit and warmth as she charmed and delighted us.

As well as the classic hits we also had the sometimes overlooked later songs from Bite and it is easy to forget how good they are but this was a timely reminder. They sounded superb here, given a bit of a funky disco treatment on Bring Me Closer but my undoubted highlights were a couple of early personal favourites. Insects and Dead Pop Stars, which was accompanied by a little film on the screens.  There was always a little bit of darkness just beneath the surface of Altered Images, deliciously so, and nothing demonstrates that better than these two songs. The punkiest songs of the set and the closest to the Banshees, though my friend Shane O’Linski did observe after Happy Birthday that it could be a cousin of Siouxsie’s Hong Kong Garden. I’d never thought of that before but he is absolutely right. There were some newer songs too plus a couple of unexpected covers. Taylor Swift’s Shake It Off – “Don’t anyone groan at the mention of her name, my daughter played this and I thought it quite punky in attitude” – and The Ting Tings’ That’s Not My Name. 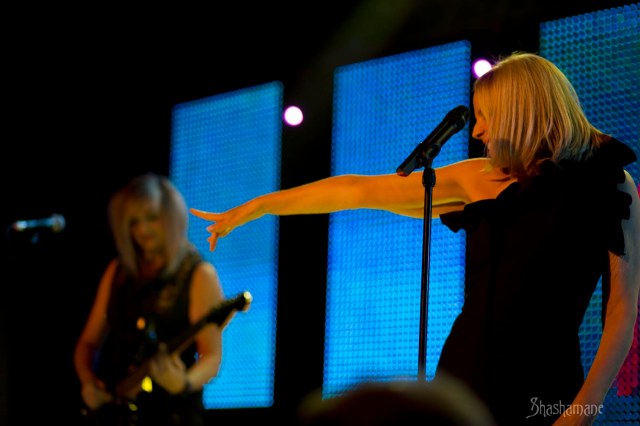 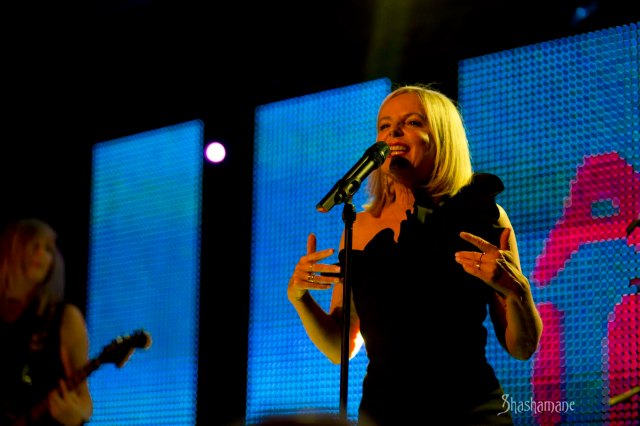 Shortly after the gig ended Clare was back out again to sign merch. I already own all the records but bought them with me just in case. I was so pleased to be able to say hello to her again and she happily signed all six record covers for me. Many thanks Clare! And thank you so much to Rick Lennox too who was even kind enough to snap a photo of us together.

Clare Grogan is one of those people that we feel we have grown up with, she shared our love of Siouxsie and the Banshees, delighted us with Altered Images and of course she also has a successful acting career with roles in Gregory’s Girl, as Kristine Kochanski in Red Dwarf plus further roles in Blott on the Landscape, Father Ted, EastEnders et al. She’s in big demand on the 80s festival circuit but it was a treat indeed to see her in her own headline show with an extended set that went further than the most famous singles and included many lesser-known favourites and a new song. She and the band put on an impressive, various and enjoyable show. Post-punk, disco and pop, this had me smiling throughout.

This was such a fun gig, genuinely uplifting musical escapism and I want to do it all again. My reflections on it might be a bit wordy when it could all really be summed up perfectly well with just one simple word. JOYOUS!

“The Singer and Actress CLARE GROGAN started her 30 year long career as a schoolgirl Popstar in her band ALTERED IMAGES.
By day she was studying for her A Levels and at night she was touring with SIOUXSIE AND THE BANSHEES, playing festivals alongside ECHO AND THE BUNNYMEN, THE HUMAN LEAGUE, U2 and recording sessions for legendary DJ, JOHN PEEL.

The band were signed to Epic Records in 1981 the same year CLARE appeared in the BAFTA winning comedy GREGORY’S GIRL. CLARE never got to finish her exams –
she wasn’t too upset!

ALTERED IMAGES quickly had worldwide success, selling millions of records, which topped the charts in several countries. They recorded 3 Top 10 Albums – HAPPY BIRTHDAY, PINKY BLUE and BITE. They had 6 Top Ten Singles working with world famous producers – MARTIN RUSHENT, TONY VISCONTI and MIKE CHAPMAN. They were voted BEST NEW GROUP at the NME awards the same year they were invited to play at THE ROYAL COMMAND PERFORMANCE.

After an eighteen-year gap in performing with ALTERED IMAGES, Clare has been persuaded to sing their hits again and continues to play in front of huge and enthusiastic
crowds.

ALTERED IMAGES have an array of artistes who happily describe themselves as fans, from FLORENCE AND THE MACHINE to THE FOO FIGHTERS. Their hit song HAPPY BIRTHDAY has been covered by COURTNEY LOVE, THE TING TINGS, THE WEDDING PRESENT to name but a few. Their songs constantly turn up in the soundtracks to movies and adverts and Clare recently performed on stage with hit band of the moment, THE DRUMS, who described her as ‘their favourite pop idol’.
For the past 30 years Clare has worked extensively in Film, Television, Theatre and Radio and Radio Drama. Appearing as a presenter on BBC6 MUSIC, BBC London Radio, BBC SCOTLAND, STV, SKY 1, VH1, THE ONE SHOW, SCOTLAND’S GREATEST ALBUM and more. She was a finalist in this year’s LET’S DANCE for Comic Relief. She has had roles in some of the UK’s best-loved TV shows, EASTENDERS, RED DWARF, FATHER TED, TAGGART, SEA OF SOULS. Her film credits include, GREGORY’S GIRL, COMFORT AND JOY, JILTING JO, THE PENALTY KING, THE SMALLEST GAME IN TOWN. The Award winning playwrite RUSSELL BARR wrote the part of Scrachett with her in mind in his play VANTASTIC which she performed last year in London. Over the years she has contributed to various Magazines including The Word, Red and Preview. And her debut novel TALLULAH AND THE TEENSTARS reached No 2 in the Waterstone Children’s Book Chart.
Clare is enormously proud of her role as patron of the British Association of Adoption and Fostering (BAAF) and speaks regularly on the subject to help high light the plight of children in care who are desperate for parents.
Clare can be seen next on TV as the wayward mum of lead character Mimi in Channel 4’s new series of SKINS. She is currently filming, The Wee Man, a film that tells the true story of Glasgow Gangster Paul Ferris. Following that, she will be at the Kings Theatre in Glasgow in the UK’s biggest and most traditional Panto playing Carabosse in Sleeping Beauty. And of course, once again she will be putting her band together in the New Year to play ALTERED IMAGES Greatest Hits.”

Big thanks to Clare, Rick and Epic.