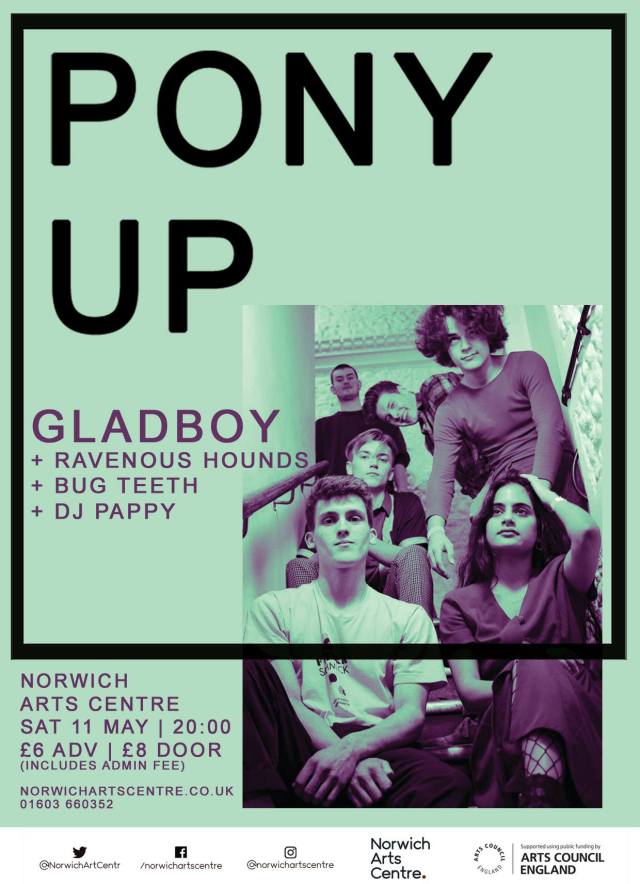 When I arrived at the Arts Centre I quickly realised it was going to be one of those gigs full of friendly, familiar faces and a generally uplifting vibe. In the bar DJ Pappy (father of Gladboy’s George) was already spinning the tunes on vinyl and just after 8pm I headed into the hall for the opening set of the evening, from the rather special Bug Teeth. This is the project of Poppy, a 19 year old UEA student whose song Serotonin caught my attention last year.  Shortly after that I had the pleasure of hearing her perform live in one of her first gigs at Annie Catwoman’s Sonic Youths showcases at NAC. I was extremly impressed then but this set took things to another level still. 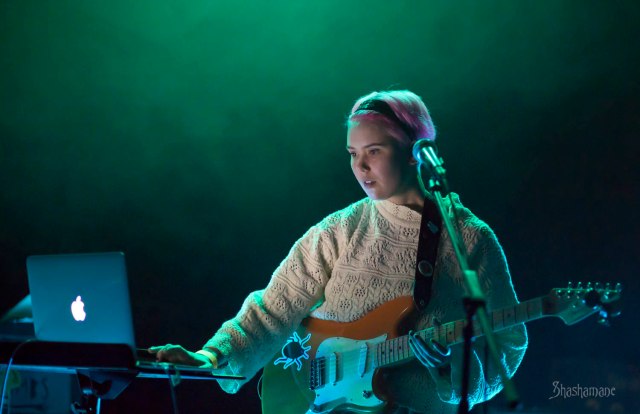 There’s a dreamy quality to her voice and sound that reminds me of the feel of eighties shoegazey and indie acts with hypnotic guitar, backing beats and sometimes with a vocal quality reminiscent of Sundays’ vocalist Harriet Wheeler but Poppy creates something altogether unique and her own. She charmed, captivated and delighted the enthusiastic audience.  This was something special and magical under NAC fairy lights and possibly my first sighting of a glitterball in this lovely venue. These are heartfelt, sometimes melancholic but always beautiful songs that leave one feeling wrapped in a sensitive embrace of empathy and understanding, and healed in some way by the music. Bug Teeth’s new single Emily is released today through Spotify and she’s doing amazing things. She can be seen again at the Octagon Chapel on 31 May for Milly’s Sisters of Silents. 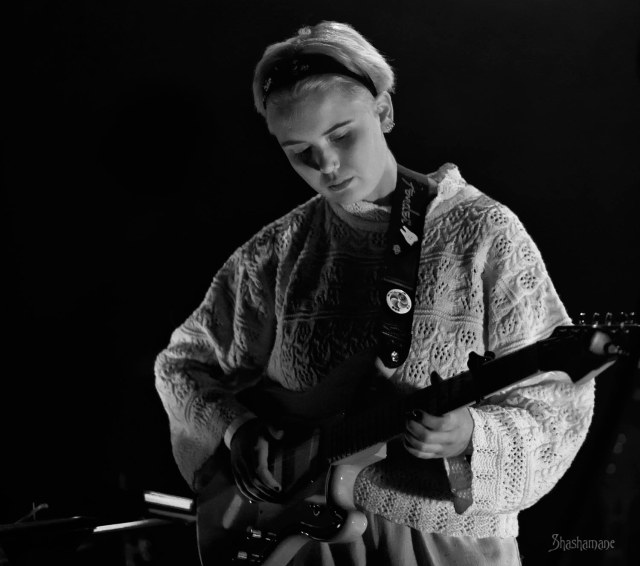 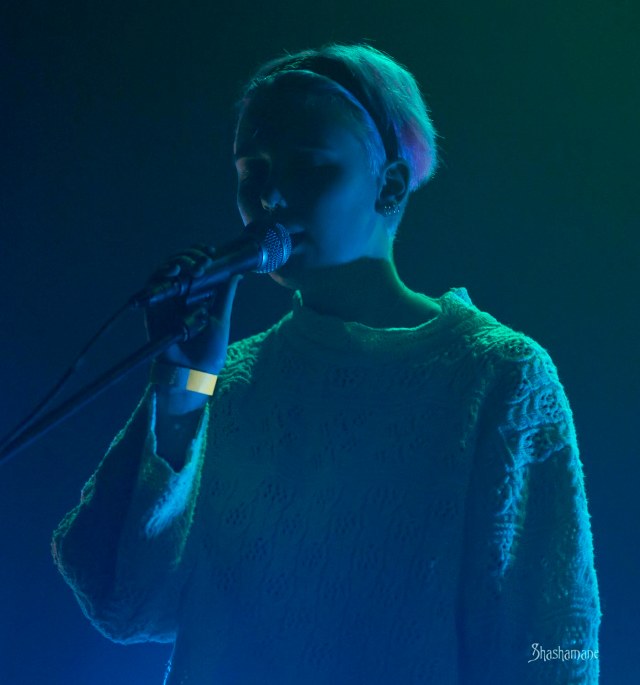 Next up was one of my favourites, Ravenous Hounds, who recently released a self-titled new album. I’ve seen them in tiny underground cellar spaces and big stages like Epic and they always fill the space with their sound and energy.  Garage punk rock n roll at its best and an extra treat that they were on this bill, which was quite a mixed one but all the acts fitted together well, which showed in the way this lively audience was so appreciative of everyone in the evening’s line-up. 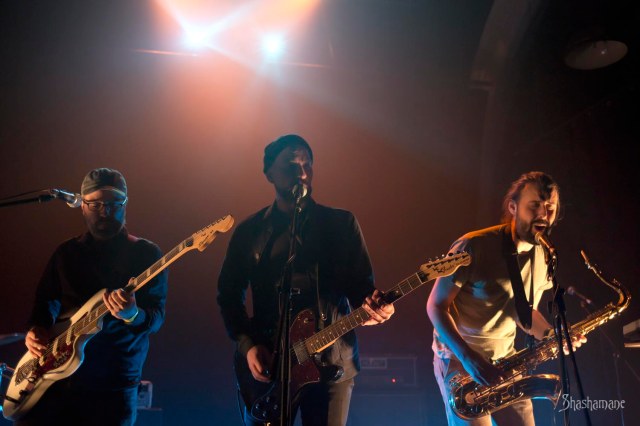 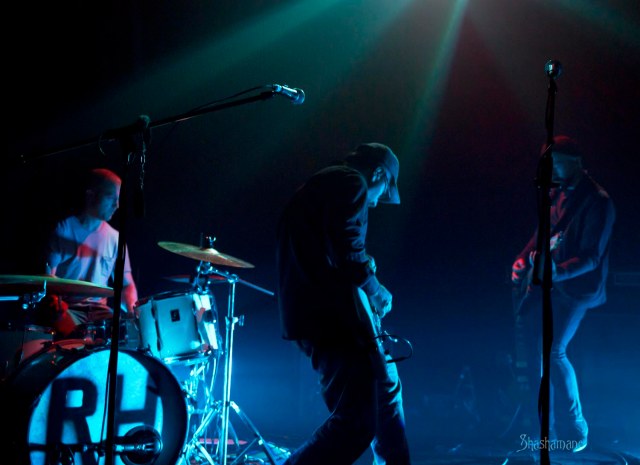 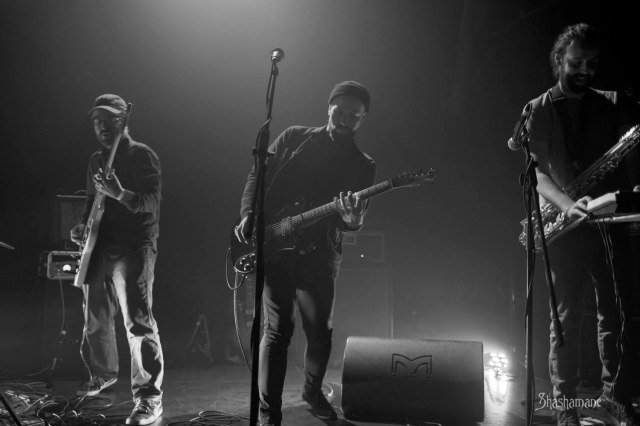 And so to Gladboy – also Sonic Youths alumni – with their ever-expanding line-up and a stage adorned with inflatable canaries to celebrate our recent promotion, and even what looked like furry handcuffs on the mic stand! This is a band who love what they do, seem to have bucketloads of fun doing it and are different each and every time, making their shows quite an event. There was a celebratory mood on the floor and on the stage, giving the gig a sense of occasion. George took turns on drums, Sonny took turns on guitar, we were all made to sit down, stand up and sing along. It was great fun. 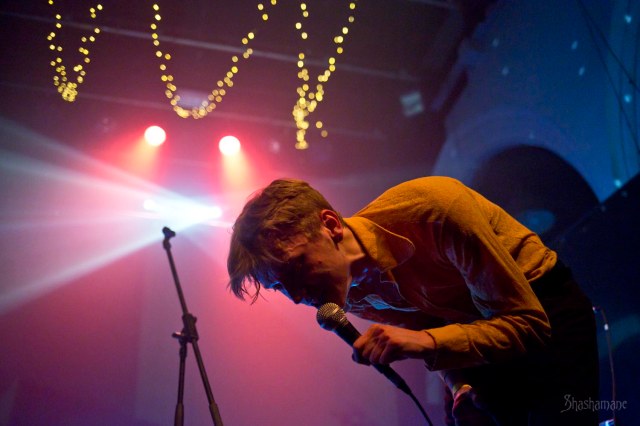 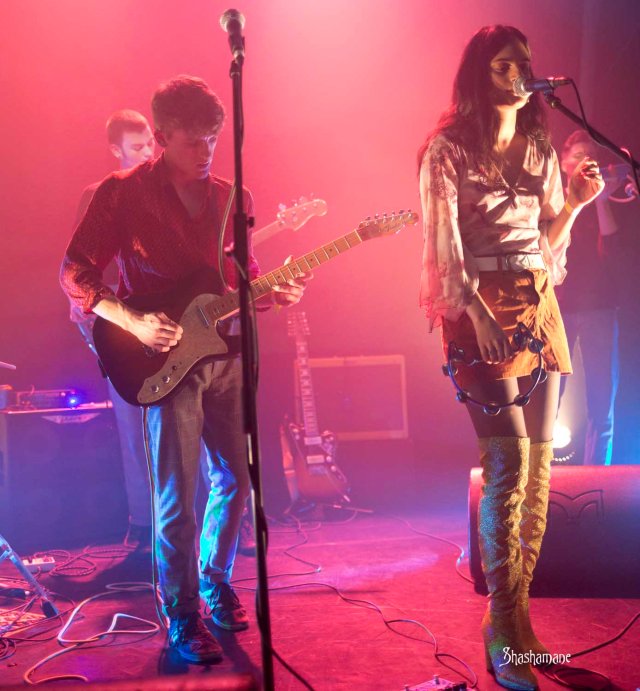 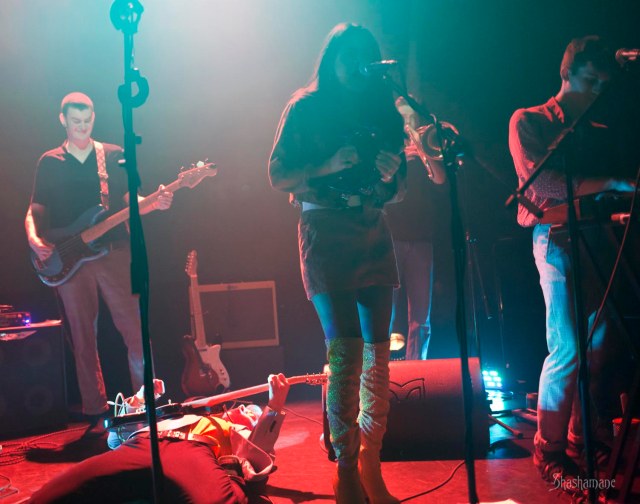 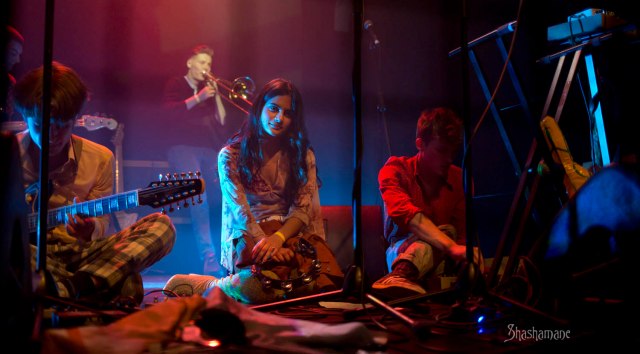 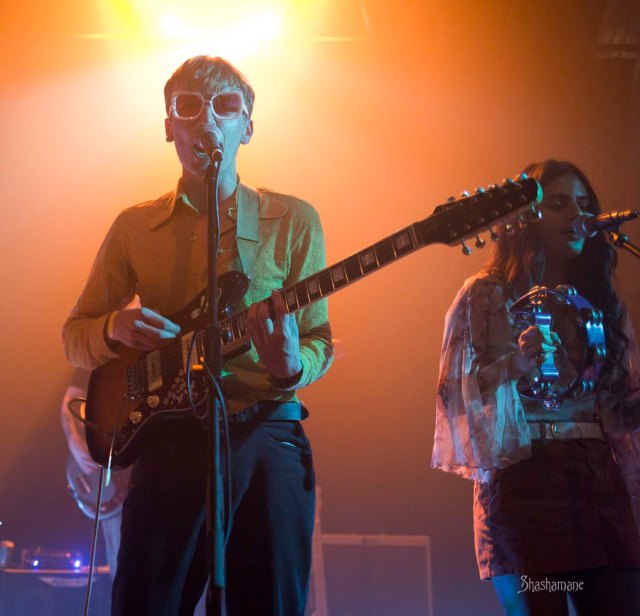 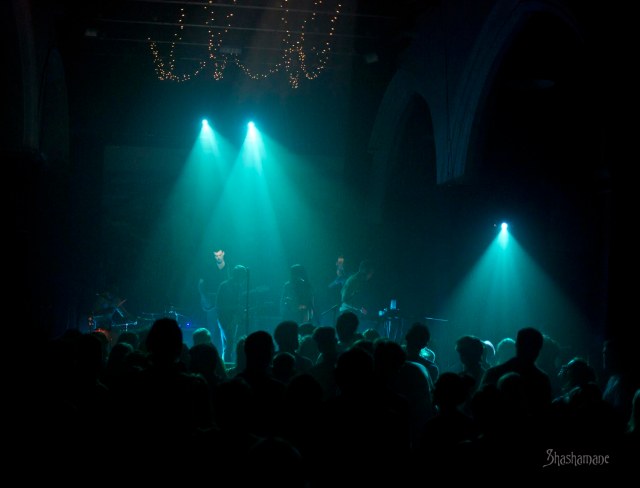 Less than a year ago the still very young band had only been going a few months and bagged a support slot to Starcrawler in this same venue. They were a trio back then and this time they headlined their own Pony Up gig with a line-up expanded to a six-piece to include trombone, synth, tambourine and backing vocals which has obviously developed their sound no end. I like that they have the drumkit up near the front of the stage too as Sonny is a phenomenal and energetic drummer.  You can hear many of their influences but the wide melting pot of these influences along with their creativity and originality means nobody else sounds like Gladboy. An interesting and exciting band.  A nice line of merch too with specially printed t-shirts for the occasion as well as sweets and a special edition newspaper! 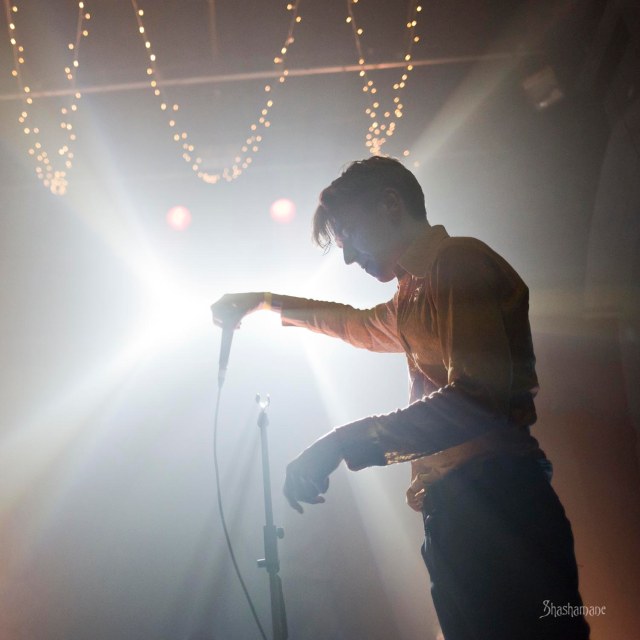 “Spit-balling into the heart of the Norwich music scene from soon-to-be demolished UEA student digs, junkedelic misfits Gladboy started out as a loud, energetic and assured 3 piece who in less than a year, cemented their place as one of Norwich’s most intriguing upcoming bands – garnering support slots with Jeffrey Lewis & Los Bolts, The Regrettes, Willie J. Healy, Brix & the Extricated and L.A. glam rock provocateurs, Starcrawler.

Expanding to a 6 piece through the addition of synth, tambourine, and trombone, the band continued to refine and texture the noise that overwhelmed earlier incarnations and created a buzz centred around camp, theatrical and fun performances that range from blistering cacophonies of noise to gigs that encourage whole audiences to sit down. No words showcase this better than Outline’s review stating: ‘This is art-pop – think Bowie, early Talking Heads or Pulp – that veers into psych and dreampop but always has a roughness and bite that gives it an edge.”

Ravenous Hounds play high energy psych-punk-rocknroll that will shake the foundations of any venue set upon. Baritone & electric guitars and stomping drum grooves are soaked with saxophone and analogue synths, creating bold and exciting sound with a range of esoteric influences. Featuring former and current members of Savage Island / Juke & the All-Drunk Orchestra and Beast with a Gun.

Dreamy, emotional ambient pop – Bug Teeth is the solo project of 19 year old Poppy Johnson. Following on from sets with The Orielles and See Thru Hands, Bug Teeth combines intricate Slowdive-esque guitar arrangements, Four-Tet Style electronics and a crystalline voice that makes her one of Norwich’s most exciting prospects.

Expect a blitzkrieg of spaced-out indie, banging electronica, 70s trouser problem soul and maybe even a dusting of old school Norwich sounds, as DJ Pappy drops all the big guns for one night only. The Gladboy fans came to hear Mrs Parsons; they went home with her dad.”

The NAC currently has a 40/40 fundraising campaign to raise £40,000 to unlock a £499,000 grant from the Arts Council for its regeneration. You can help by donating an extra £1 when buying a ticket, or at the Arts Centre itself in one of its collection jars, or by clicking here. Or even buying a 40/40 ale at the NAC bar at a gig where £1 will go to the fundraising.

To end the music for the evening, after this gig I purchased one of the t-shirts and then headed quickly over to the Louis Marchesi Crypt to catch an hour or two of the first Long Swords night. Sparks were playing as I walked down the steps to the crypt, which was a good sign, and it looked really well-attended too. It’s a cool blend of prog, krautrock, psych, glam and space disco. A welcome addition to the music calendar with a night in the crypt every month … and it doesn’t clash with Cave-In. 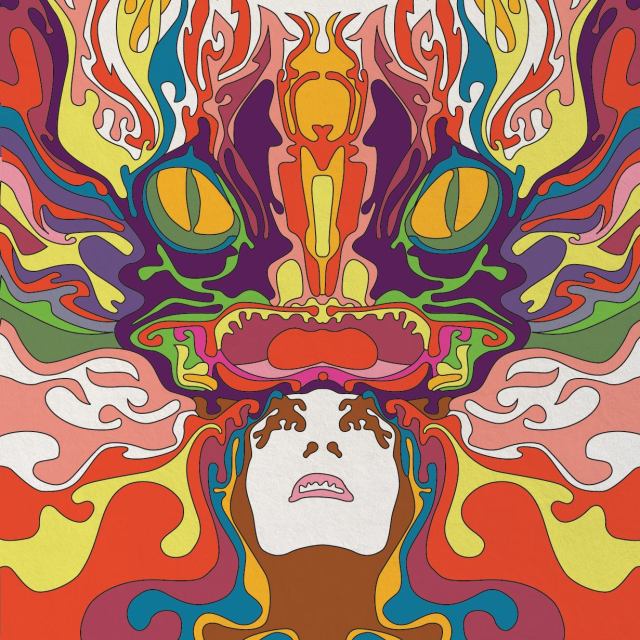