As we know all too well, there are frequent gig-clashes in Norwich and this Thursday evening was no exception. However, my chosen gigs at Norwich Arts Centre and The Reindeer were so close to each other that gighopping was fairly straightforward, albeit missing a couple of acts. 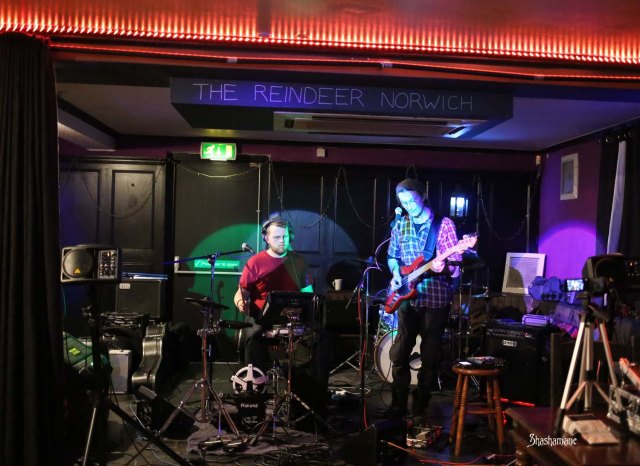 My evening started at The Reindeer for Shane’s Shenanigans which always presents an interesting line up.  This one provided me with my first chance to see the duo that is Ezifreak, who were great! 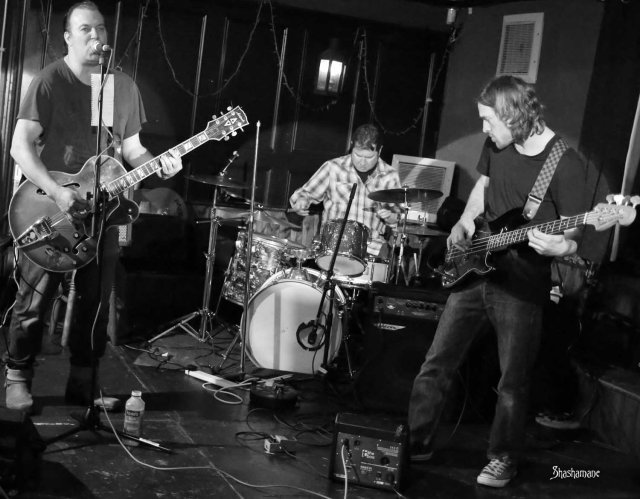 Next up was a rare Norwich appearance from Wroxham’s The Lantern Men (formerly The Turbos) whom I love, with a dirty garage rock set that passed by all too quickly but was a mix of covers such as Love Potion No.9 plus others by Thee Milkshakes and The Sonics but a healthy dose of their originals too, including a first live performance of Attack of the Killer Gnats, a sort of homage to the Broads. Check out their wonderrfully titled Chords from the Broads EP and Lure of the Lantern Men album. 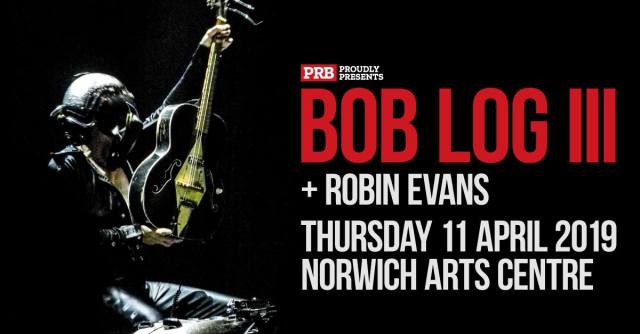 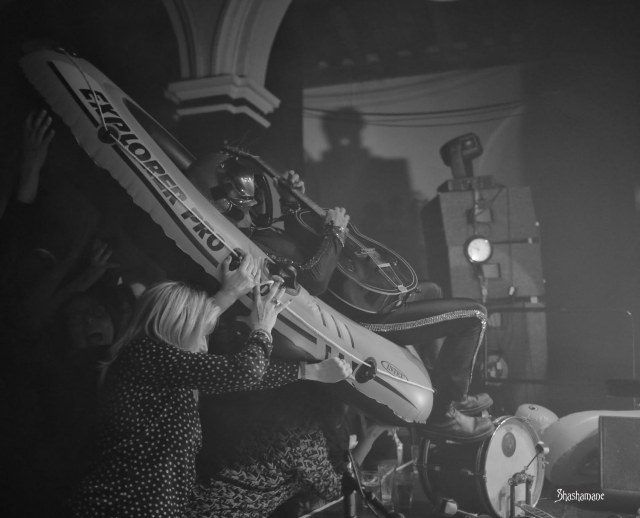 Following their set I hotfooted it to the NAC to catch Bob Log III for PRB Presents. Unfortunately I missed the support set from Robin Evans but have heard lots of good things. Bob Log III had just started when I arrived and it was already obvious bedlam as I entered the hall. Balloons being blown up and burst all over the place, inflatable ducks and dinghys on the stage plus Bob Log himself from the future in space helmet and telephone as he plays raw and dirty one man blues.  It was surreal chaos.  Audience members and Bob himself crowdsurfed in a dinghys, bottles of bucks fizz and prosecco were were opened and poured into inflatable ducks and a dog bowl for people to drink from and all the while the place was filled with the smell of toast. Yes, there was a toaster at the side of the stage and a full loaf of Hovis bread to keep the toasting going.  Absolutely nuts. 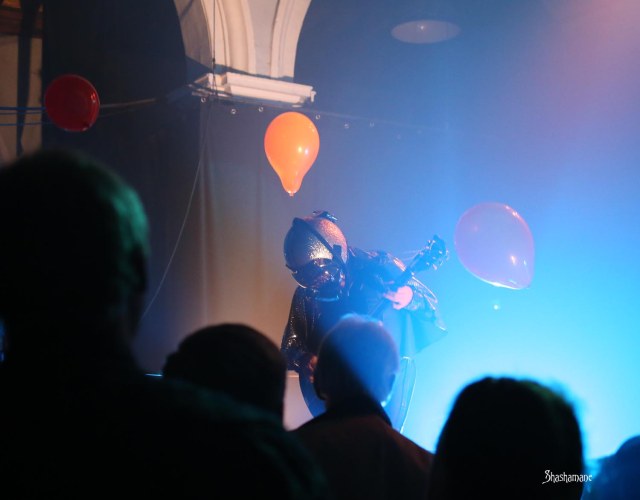 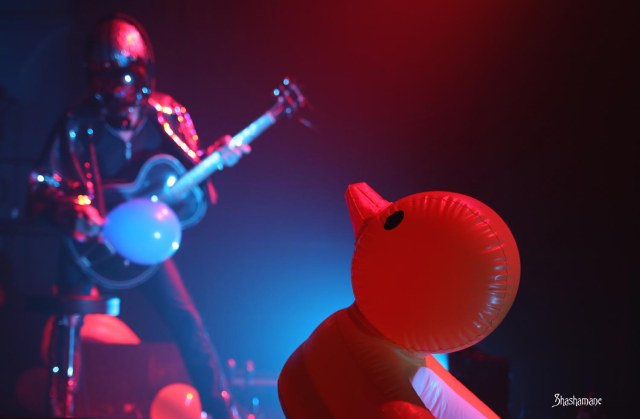 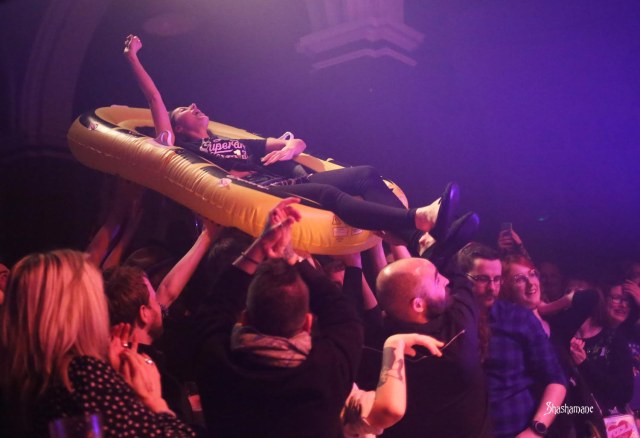 NAC has the most fantastic security staff and my respect for them just grows and grows. This was no ordinary gig and they had a thousand things to keep an eye on what with dinghys, ducks and toasters but surveyed with a smile on their faces. 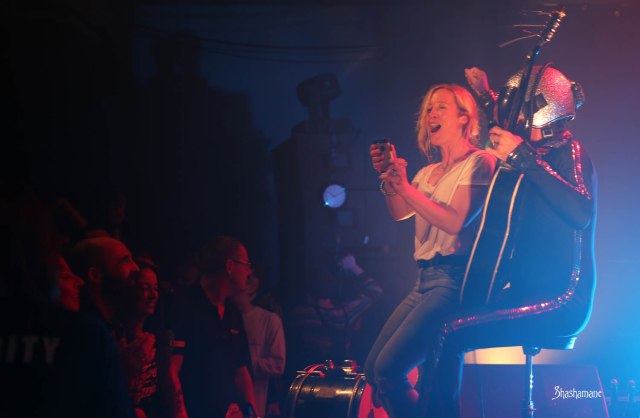 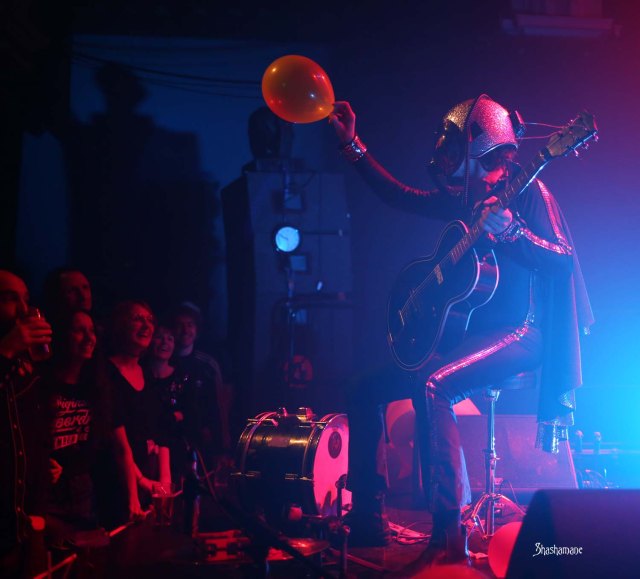 To finish the night I returned to the relative sanity of Shane’s Shenanigans (how often is one able to say that?!) where, alas, I had missed Loose Leaf Drifters but Bavarian Rocket Groop were playing, another band I love. Not alone in that some had travelled down from Edinburgh to see them!  It was wonderful stuff through Chad’s impressive new PA. 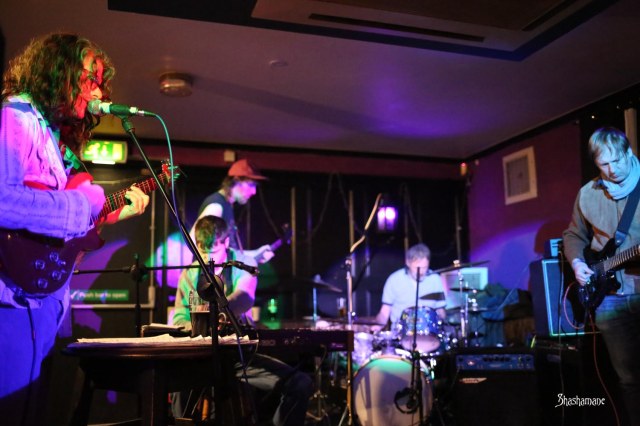 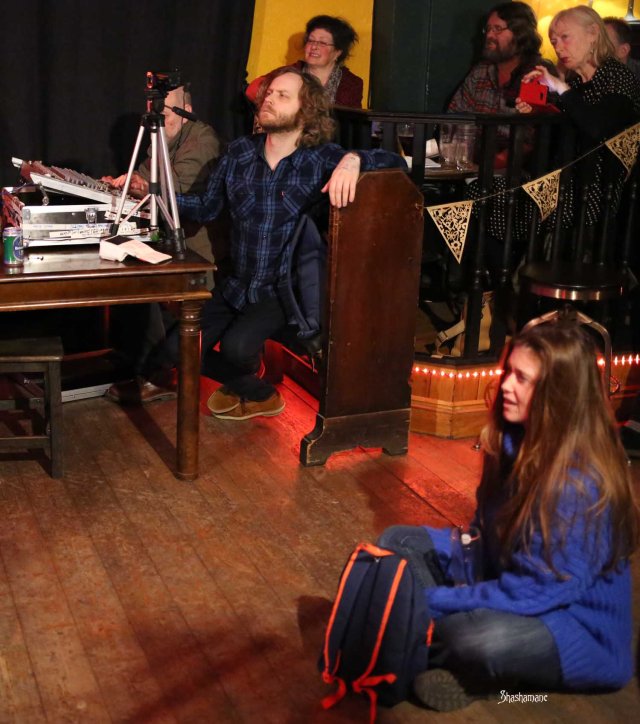 “Bob Log III, Fat Possum recording artist and one man band crown prince of punk blues from Tuscon, Arizona. Witnessing Bob Log live is an unmissable and unforgettable experience. By rights he should be a punk blues stadium super star.

He takes to the stage with his face masked in a crash helmet with a black visor and a telephone wired in it for a mic and wearing a blue jump suit. Bob then unleashes a torrent of hardcore Mississippi Delta blues, hip hop beats and punk rock.

In this current world of homogenised and mass marketed music, we need true mavericks like Bob Log III more than ever.”

Our wonderful and special NAC currently has a 40/40 fundraising campaign to raise £40,000 to unlock a £499,000 grant from the Arts Council for its regeneration. You can help by donating an extra £1 when buying a ticket, or at the Arts Centre itself in one of its collection jars, or by clicking here. Or even buying a 40/40 ale at the NAC bar at a gig where £1 will go to the fundraising.