Yet another sellout gig at the Arts Centre for the return of the Blockheads.  Apparently they have played NAC in each of the past eight years and yet somehow this was my first time seeing them since a couple of UEA gigs, in 1998 and again in 2000 which was sadly one of Ian Dury’s last gigs, and so it’s taken me all this time to see them with a different front-person.  Occasionally they are fronted by Phil Jupitus but their more regular vocalist is Derek “The Draw” Hussey, Ian’s former bodyguard and on lead vocals duty here at Norwich.

Support, as it was last year, was provided by the excellent Ben C Winn who is absolutely perfect for this crowd with his humour and clever use of words. Not surprisingly he went down brilliantly with the audience. Rita, Don’t Retire almost cries out to share the same record as Razzle in My Pocket.

Despite the massive loss of Ian Dury it is still well worth seeing the Blockheads live, not least for the chance to see some incredible musicians playing with absolute joy. The band still contains such legends as Chaz Jankel and Norman Watt-Roy and of course the songs are incredible.  Derek walks onstage and drapes one of Ian’s silk white scarfs around the mic stand and proceeds to deliver a set of classic Blockheads tunes. Of course he is no Ian (nobody is) but he strikes the right tone and the crowd lapped up hearing these songs played live by these outstanding musicians. 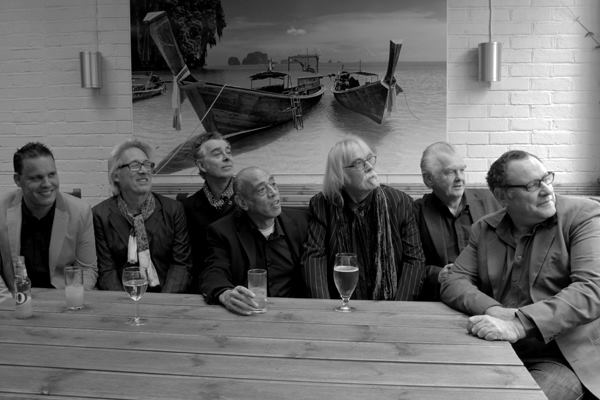 This is without doubt one of the finest bands touring. The band still have four of the original founding members from the 1977 lineup.

The Blockheads are now fronted by one of Ian’s best friends Derek ‘The Draw’, the band’s vocalist and wordsmith. Chaz Jankel, Norman Watt-Roy, John Turnbull and Mick Gallagher still remain from the original band and the current line-up is augmented by John Roberts on drums and a rolling line up of saxophonists including Gilad Atzmon, Terry Edwards or Dave Lewis.

These legendary Brit-Funkers will be playing all the old favourites and new material. In 1978 Chaz composed ‘Hit me with your Rhythm Stick’ with Ian and in 1979 had a number one hit record. In 1982 Ian Dury & The Blockheads disbanded and were not to play together again until 1987 when they went out to Japan to play three shows, disbanding again until 1990 when the death of Charlie Charles in September of that year re-united them to play two Benefit gigs at The Forum, Camden Town in aid of Charlie’s family. The last performance by Ian Dury & The Blockheads was February 6th 2000 at The London Palladium. Ian died at 9am on 27th March 2000.

Now over 15 years since Ian passed away, The Blockheads still perform Ian’s songs to packed out venues around the World.