Posted on December 4, 2018 by shashamane

This year has been another vintage one for gigs and also one in which I’ve been lucky enough to see Courtney Marie Andrews performing live three times, twice in London and also that wonderful NAC gig. This was to be my fourth time this year alone such is my appetite to experience her magical performances.

The day started in rather slow and comical fashion though with the train grinding to a halt before it had even properly left Norwich station due to an obstinate swan refusing to leave the bridge at Trowse. I guess it was in a grumpy Monday mood but some 25 minutes later he was coaxed off and the train was on its way. I suppose that was quite a Norfolk moment.

With a few hours to kill before the gig I checked out the evening’s venue, the stunning Union Chapel which is only a couple of minutes’ walk from Islington Assembly Hall where I also saw Courtney play earlier in the year. I also noted that the pub opposite was called The White Swan. Hmmmm. Afterwards I spent a couple of hours in Camden, saw a black cat stroll out of Amy Winehouse’s former garden and then I dried off from the rain with a Guinness at The Hawley before heading back to Islington.  I’d been told it is a good idea to queue early to get anywhere close to the front, so I did just that, standing freezing outside a good hour before the doors opened. The queue was asked by a passer-by if we were queuing for mass! In a way we were, a congregation bonded by a love of CMA.  Even with just a dozen or so people in front of me all the front pews were already commandeered when I got in but there is no bad view at Union Chapel and I was more than happy with my space about four rows from the front. This venue is one of the best and most beautiful I have been in and it was no hardship to warm up for an hour or so with a hot chocolate before the music got under way with support from Andy Jenkins of Richmond, Virginia.  He rather bravely opened with an a cappella song which he later spoke of: “Opening your set at Union Chapel with an a cappella number is either hubris or a triumph”, he certainly seemed to pull it off.

9pm was Courtney time. She came on to warm applause from the sold out audience of about 800 and started straight away with Put the Fire Out which sounded amazing in this space.  Pointing to the tray of medicinal drinks she explained that she’d just played Dingle for Other Voices and then Belfast but now had “the cold”.  She was clearly suffering but through sheer determination, commitment, professionalism and not wanting to let her fans down she said she wasn’t going to let a cold and sore throat stop her. “I’m not gonna cancel after making it all those miles over here” which is so admirable but cannot have been easy.  The audience, some of whom were coughing too, either through empathy, sympathy or common symptoms, were fully on side with Courtney and appreciated what she was doing, trying their best to carry her through and somehow her voice didn’t sound too affected by her cold but she clearly felt most unwell and I felt concerned for her. There was a beautiful vibe in this lovely venue, a two-way feeling of kindness, a theme with Courtney as she mentioned. I have found this, wearing a t-shirt with the words May Your Kindness Remain has noticable effects, it radiates positivity and it has connected me with many strangers. There was a heartwarming connection after her Norwich gig where in the pub afterwards I was asked about the words. I asked the barman if he could stream her song through the pub and he did, playing the whole album to great appreciation and some lovely bonding with new friends. Without that t-shirt it’s most unlikely any of us would have even spoken to each other. It’s a great message and in humble style it doesn’t even mention her name.

It was good to hear these familiar songs stripped right back and even with a sore throat her voice was still incredible. She said it was the “squeakiest show I’ve ever done” but that’s just her high standards. She was magnificent. The songs are stories inhabited by real characters, some lonely, some vulnerable and the writing itself draws me in but with her voice and playing too they become treasured gems. Her songs are precious to me.

She told us a few stories about the songs, some being explained for the first time, and then she was joined by the brilliant BJ Cole for several numbers (he also joined her in Ireland for the Other Voices show), including a fantastic Table for One and a bit later they were further joined by a trio of backing singers (Embasan, whose album Coutney produced) sounding like a soul choir on Long Road Back to You, and a cover of Neil Young’s One of These Days, plus a real goosebumps moment with Let the Good One Go, despite everything Courtney’s voice absolutely soaring at the end. This alone would have made me want to give a standing ovation and I could feel I was not alone in that.

I think she needed to preserve her voice and although she really wanted and hoped to play for longer and take some requests she asked if we would mind if she closed with a solo May Your Kindness Remain. Of course we didn’t, she’d already given us about 75 minutes of magic. A few warm-ups with her voice and then she said “You know, I think I’ll do this one unplugged and hope you can hear me at the back”, and this was one of the show highlights. In an impromptu moment she walked to the back of the stage and down some steps, and to our surprise and delight sang the last couple of verses right in front of us on the floor.  When the song finished the crowd rose as one for a thoroughly deserved standing ovation which was rapturous and prolonged. I’ve rarely seen such an ovation at a gig. I’m not quite sure how she got through the show at all, to be honest, dogged determination probably but she was obviously in a pretty bad way and feeling extremely rough. How she performed at all is amazing but that it was one of the best gigs I have seen all year makes it all the more incredible. After every Courtney gig I always feel in some way healed and I hope I can send some healing vibes back her way too.

The last train back to Norwich felt like a slow one and when it eventually arrived I noticed some December ice on the ground but my heart was still glowing warm from an incredible gig when I finally did make it home a little before 3am. It may not have been the request show she planned but I still got to hear many of those I would have chosen anyway such as Paintings from Michael which was played at the piano, Table for One, Let the Good One Go, Near You, and another of the set highlights, Border – possibly her angriest song – the pedal steel from BJ adding something powerful. We even got to hear a couple of brand new songs It Must Be Someone Else’s Fault, and Ships in the Night that makes me excited for a future album. They sound great with her usual style of songwriting that connects with us so deeply. The background stories to the likes of Irene, Border, This House (and Tucker! This resonates with me so much), Paintings from Michael drew us further into her world and her beautiful soul. Her wise, kind old soul. 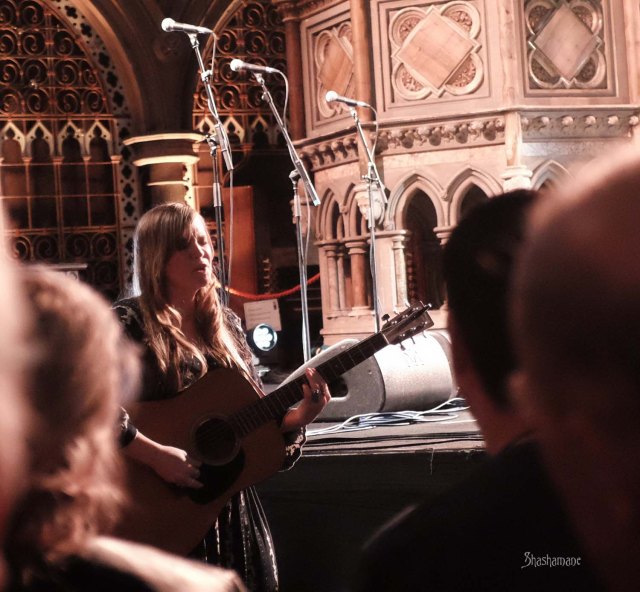 Thank you Courtney, your gigs are always among my favourites, and I hope you feel better soon. As for Union Chapel, this has instantly become one of my favourite venues too. Observing the festive tree to the side of the stage, CMA said it made her think of her mom, who “loves Christmas”.

I’m on just over 200 gigs for this year so far and this one is definitely one of the best of them. If 2017 and Honest Life was a breakthrough then 2018 and May Your Kindness Remain has been a triumph with the album appearing in many of the ‘album of the year’ lists, including my own.

What a beautiful venue and what a stunning gig from Courtney Marie Andrews despite her heavy cold. She fully deserved that standing ovation from a sellout Union Chapel audience. Guest appearance from BJ Cole too, whom we know so well in Norwich #courtneymarieandrews #mayyourkindnessremain #unionchapel #unionchapelhall #london #islington @courtneymarieandrews @unionchapeluk #bjcole

“Union Chapel is a working church, live entertainment venue and charity drop-in centre for the homeless in Islington, London, England. Built in the late 19th century in the Gothic revival style, the church is Grade I-listed.”