Once again, even on a Tuesday night there were a handful of gig clashes but possibly the most notable event happening outside of this gig was the The Future of Norwich Music Forum meeting happening at Epic which probably had a bit of an effect on the attendance here at a toasty warm Arts Centre, which if so is quite ironic and also a shame because it was a quite beautiful and at times amazing gig.

The Breath were largely an unknown quantity to me but I was intrigued by what I had read about them and have always enjoyed seeing support act Chalky Seas but the clincher for me was Milly Hirst‘s name also being on the bill.  Her gigs of late have been a little sporadic in frequency (not that one would know it, she is sounding in fine form) but I did see her at the superb BBC Introducing: Remembrance event at the Octagon Chapel at the weekend, and the opportunity to see her on the NAC stage was for me one not to be missed.  I have seen no other musical act as many times as I have seen Milly and still she never fails to mesmerise and captivate me. Her songs always reach and touch my soul.  At the Octagon she was playing electric but was back to acoustic here, though not her usual guitar which has a more bassy tone that this one. Starting her set with the haunting I Still she followed this with a few more of my favourites, the sublime Birds, and Gentle Sailor among them, plus a lovely new one written for the Remembrance show before closing with the masterful Mary.

I’ve not seen Chalky Seas since they played with Wooden Arms at Open some months ago and really enjoyed seeing them again. Tight and beautifully melodic and harmonic, towards the end of the set said they couldn’t see us very well but knew there were plenty of people scattered around and urged us closer for an unplugged number which was my highlight of the set, showing their voices and harmonies off beautifully.

The Breath were a revelation to me, I was expecting folk but what I was not quite prepared for was the incredible variety to go along with the alt-folk style, stunning vocals and outstanding musicianship. Guitarist Stuart McCallum has played with the Cinematic Orchestra and singer Ríoghnach Connolly with Afro Celt Sound System. The styles took in not only alt folk but also jazz, rock, Celtic, and a huge dose of soul.  Connolly has a fantastic, charismatic presence too, regaling us with little stories, asking about Bitterns (“They’re extinct where I come from, you’re lucky to know what they are!”) and apologising for the depressing nature of some of the material “But it’s cathartic!”  Too right it is.   Very impressive stuff, just a shame there were not a few more of us there to appreciate it but everyone was loving it and very respectful, if a little shy and polite in that way of Norwich audiences sometimes.  Special mention too for the outstanding drumming.

“Rioghnach Connolly, a truly fabulous singer… just one of the most intoxicating voices anywhere” – BBC R2: The Folk Show with Mark Radcliffe

“an affecting blend …. McCallum provides the grandeur and artifice and Connolly the intimacy and purity” – Uncut

The Breath is guitarist Stuart McCallum (Cinematic Orchestra) and singer Ríoghnach Connolly (Afro Celt Sound System) . Based in Manchester their unique take on alt-folk journeys from lush, beguiling storytelling to uplifting, punch-the-air anthems. At its heart is Rioghnach’ s deeply soulful, utterly engaging, stop-you-in-your-tracks voice alongside Stuart’s understated brilliance and their exquisitely crafted, personal songs. Yet it’s the emotional depth of the songs and the remarkable connection the duo share on stage that make the Breath’s live performance so compelling.

The Breath appear tonight presenting material from their brand new album, ‘Let the Cards Fall’ (Real World, 14 September 2018) a bewitching collection of honest, heartfelt songs written as a stream of poetic consciousness as likely to touch on childhood summers and first love as cultural dislocation, post-colonial injustices and grief. 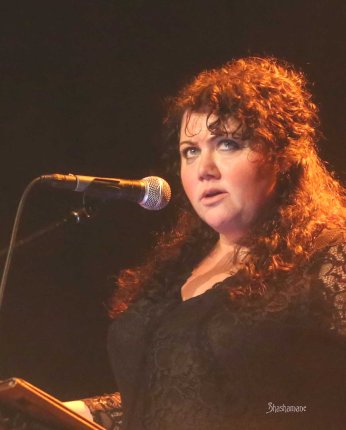