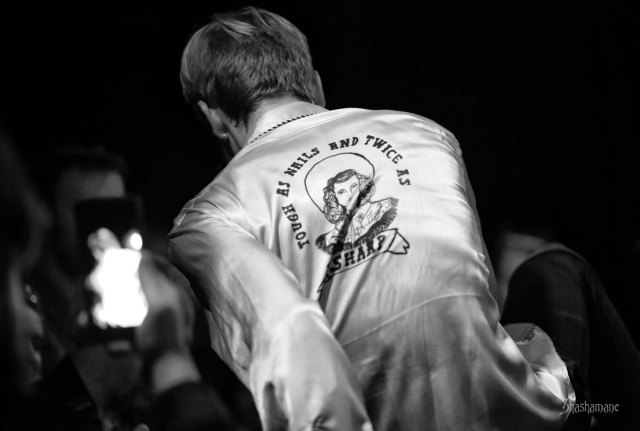 Quite some line-up for this EP launch night for Gladboy’s Ego Pushin’ EP but in typical Norwich style these days, even on a Monday night there was a major clash of not just gigs but gig demographics with some recently crowned Q award winners headlining at Norwich Arts Centre.  But Gladboy are one of the most exciting acts to emerge from Norwich in the past twelve months and there was no way I was missing their big night.

There were 50 special and limited edition numbered and personalised CD versions of their EP on the merch table, each featuring a different photo.  As I pondered and dithered to make my choice and watched my favourites being snapped up one by one by the minute (why didn’t I simply choose #1?!) I eventually made my choice and was very happy with it. A photo of a church detail in Braintree apparently.

First on was strip mall, a new name on me but she delivered a confident set under harsh red stage lights in what must have been an intimidating environment being first on, on a Monday night at someone else’s party. She pulled it off though and was well-received by the audience.  She was followed by York’s Bull who quickly won me over with their incredibly varied and charismatic set but if the truth be told they probably already had me won when after checking their sound levels asked us if they should just start or do a proper walk-on. We unanimously voted for the walk-on and this meant they came onstage to big and loud cheers. Bands should fanfare themselves sometimes! 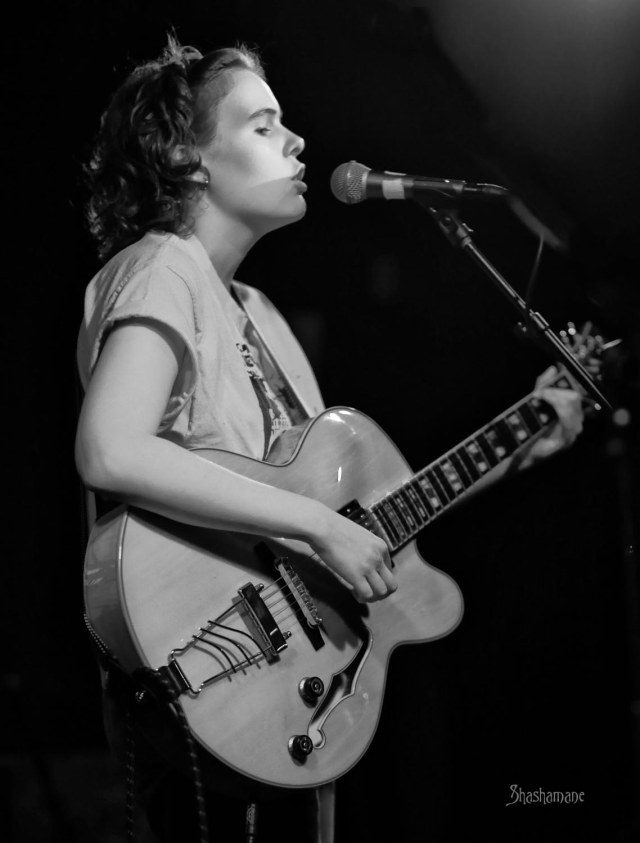 Bag of Cans certainly announced themselves clattering onstage to an intro tape that sounded like a parallel universe Benny Hill/Magic Roundabout mish-mash theme tune and proceeded to play an incredibly fun and good-natured set, how can you not love anyone who opens with a song called Guantanamo Baby?  They reminded me a lot, certainly in spirit and sometimes musically, of another classic UEA/Norwich crossover band from the 1980s and big favourites of mine, Serious Drinking, who also threw in some politics and social commentary into their songs but still made their gigs fun.  I have often lamented over recent years the disconnect musically between the UEA and the Norwich musical community, the UEA – or student bands – were at several times the absolute epicentre but for unknown reasons there has been a bit of a detachment between the two in recent years but it’s pleasing that we do have more and more exceptions to that, Bag of Cans, Gladboy (of course!), Laura Goldthorp, and Phoebe Troup being some recent notable examples restoring the connection.  Anyway, I don’t think there was anyone in the room who wasn’t completely won over by Bag of Cans who were not only good and fun musically but visually entertaining though I’m not sure the running/streaking hair dye was not part of the plans!  Their eponymous final number explains their name, which whilst sounding like madness in a box of frogs style of course refers to a Bag of Cans “offie takeaway”!  Really fun band. 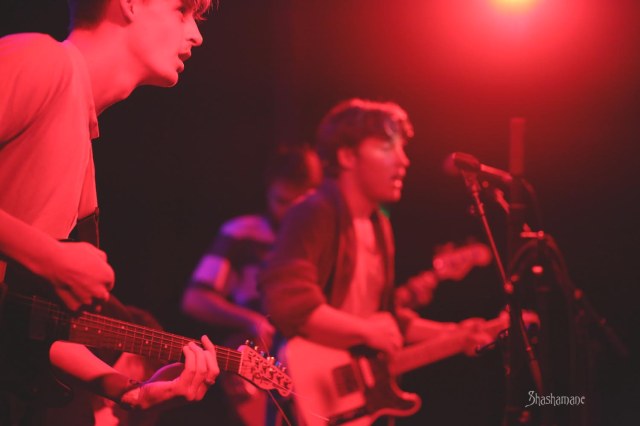 So it came to the night’s main event, the brilliant Gladboy.  I’ve probably said in every write-up I’ve done about them that not only do they have the songs and the charisma but also a refreshing confidence and self-belief. There’s no apologies or false humility here and nor should there be, they are bloody good and we all know it. The current Norwich City first team has a number of Academy players playing alongside more established pros and are more than holding their own. Shining in fact. Much the same can be said for a number of Norwich musical acts who have come through the Sonic Youths and Access to Music “academies” and are already major players on the local circuit. Gladboy are definitely already Premier League status in Norwich and this was another major statement of intent pretty much selling out the Waterfront Studio on a Monday night, at the same time as Goat Girl were selling out the NAC (and another gig happening downstairs at the Waterfront!)  Playing here in the new five-piece line-up (occasionally augmented with some brass) they were strong and varied playing the music they love. Garage, surf, psych, rock, you name it. They are a band who I see quite regularly and yet they have noticably upped their game each and every time I have seen them. They are constantly evolving, developing, progressing and changing and it’s an exciting ride to follow.  If they don’t get nationwide recognition within the next twelve months I will be very surprised. If I had such top ten type lists I’d say they are already one of the top ten Norwich bands, if not one of the top five and now they have a superb new EP to back up that justified onstage confidence. This was one of my most enjoyable Studio gigs and it was a delight to see such a young audience dancing and celebrating with all the acts throughout the night. Gladboy have a refreshing onstrage presence and are a refreshing presence in the city too.

Many of the audience were presumably UEA students which shows they do come out for gigs, the likes of Gladboy and Bag of Cans are hugely helpful in showing just what the city has to offer for music lovers.  I am so pleased they are representing Norwich so brilliantly too, we can be very proud of them. Gladboy just have it and by rights should be destined for greatness. Cherish them whilst we have them, they have a rich melting pot of many influences from Surf, The Beach Boys, punk, garage, rock, pop harmonies and so much more which they turn collectively into something rich, fresh, vibrant, relevant and above all very exciting, melodic, catchy pop songs that just feels and sits rights in these times.  Sometimes it’s The Beach Boys meets The Buzzcocks … how cool is that?! A perfect prescription. 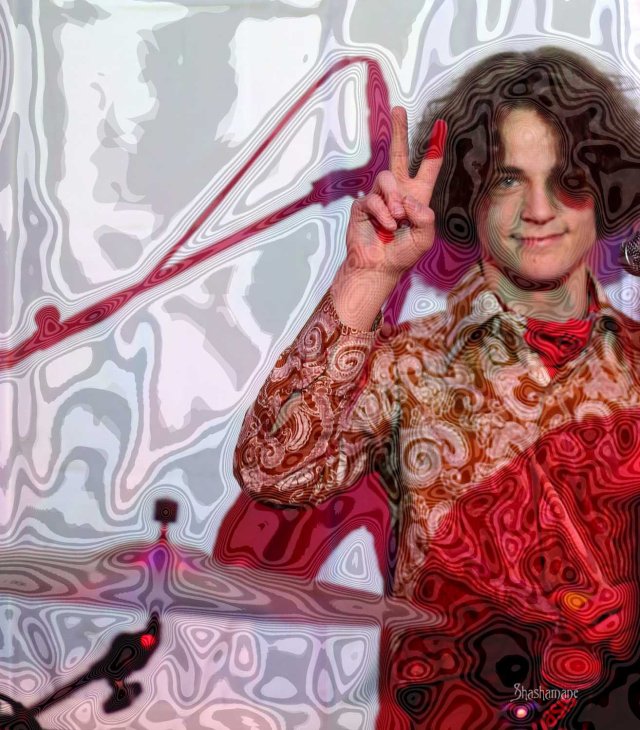 To honour the forthcoming release of their EP, Egopushin’, The Majic Carpet and Gladboy have teamed up to present the band’s biggest ever headline show. More party than gig; expect bubbles, balloons, and a spooky carnival atmosphere that’ll make it a night to remember.

Loud, energetic and assured: Norwich’s Gladboy have screeched into Norwich’s live music scene and in less than a year, establishing themselves as one of the city’s most formidable live acts. With roll on the floor guitar solos, soaring Beach Boys-esque harmonies and frequently changing instrumentation, the band’s short tenure has seen them share stages with Willie J Healy, Starcrawler, and New York anti-folk innovator, Jeffrey Lewis.
Continually developing, the band’s aim was to self-release an EP that encapsulates their frenzied live performances. Diverse songwriting that switches from Pavement-inspired vocal drawls to Phil Spector influenced girl group pop, the eclectic EP is set for a late September release which will make the Waterfront show an eager chance for fans to hear the songs live.

York’s finest export Bull will be making a return to Norwich showcasing their blend of 90’s alt and surf rock. Last time they played they tore apart the Rumsey Well’s with their unquivering energy and charisma. This time it’s going to be even bigger and better. They have previously toured the US of A, Europe and all the British hot spots with an array of artists, from Pavement’s own Spiral Stairs to Amsterdam rockers Canshaker Pi.

Fusing the bluesy pub rock clatter of late 70s Canvey Island with tongue-in-cheek lyricism playing with conspiracy theories and botched efforts at cooking Pad Thai (yes really), BBC Introducing endorsed 5-piece Bag of Cans will be next up. Fresh from the release of debut EP ‘Why won’t Anyone Take us Seriously?’, expect them to show why they’re reputation continues to grow as a tight and charismatic live act.

Having amassed 13 bandcamp albums, a support slot with Crywank and the unparalleled description as “a little bit Plath, a little bit sexy, a little bit Catholic” – all in the space of 2 years – bedroom pop artist, Strip Mall, will begin proceedings with her debut Waterfront appearance. 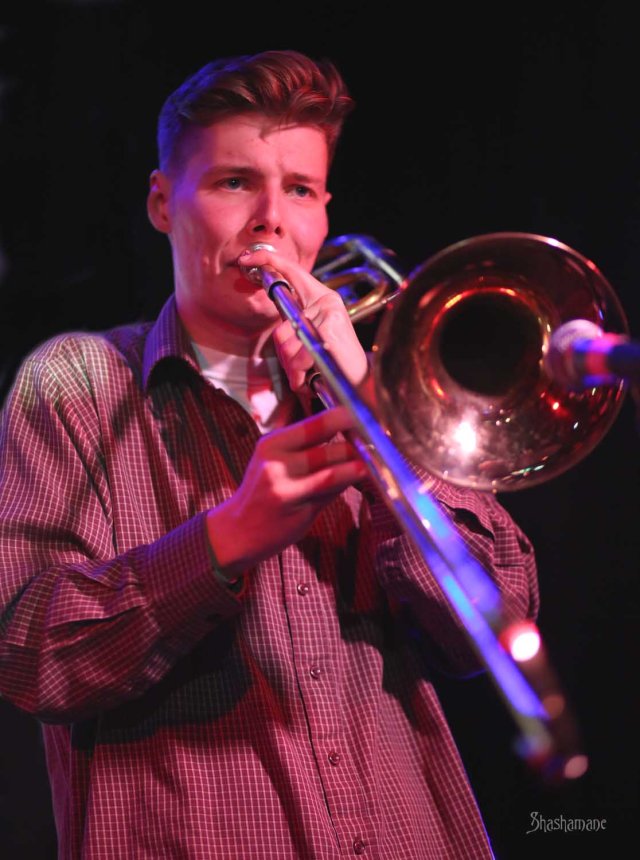 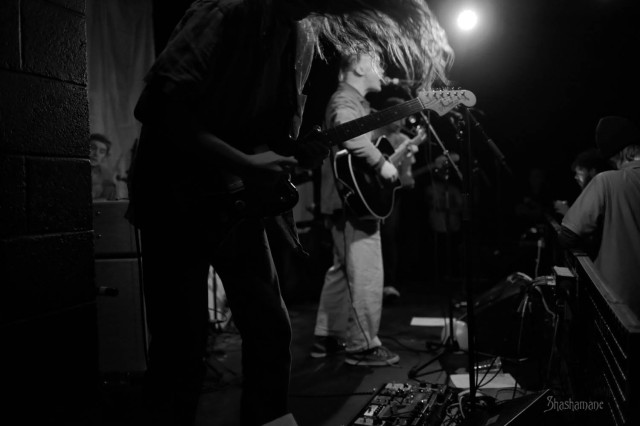 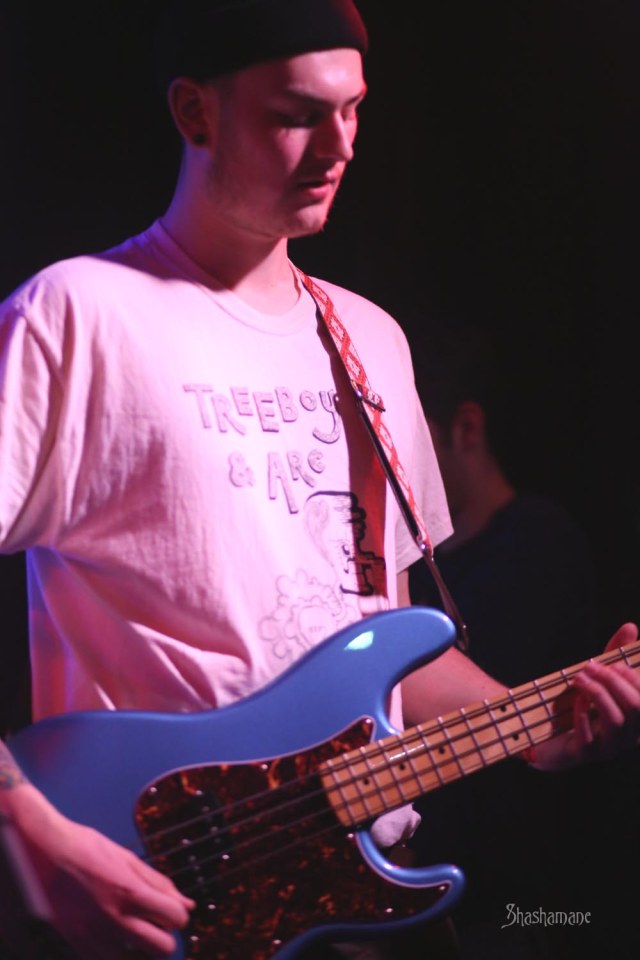 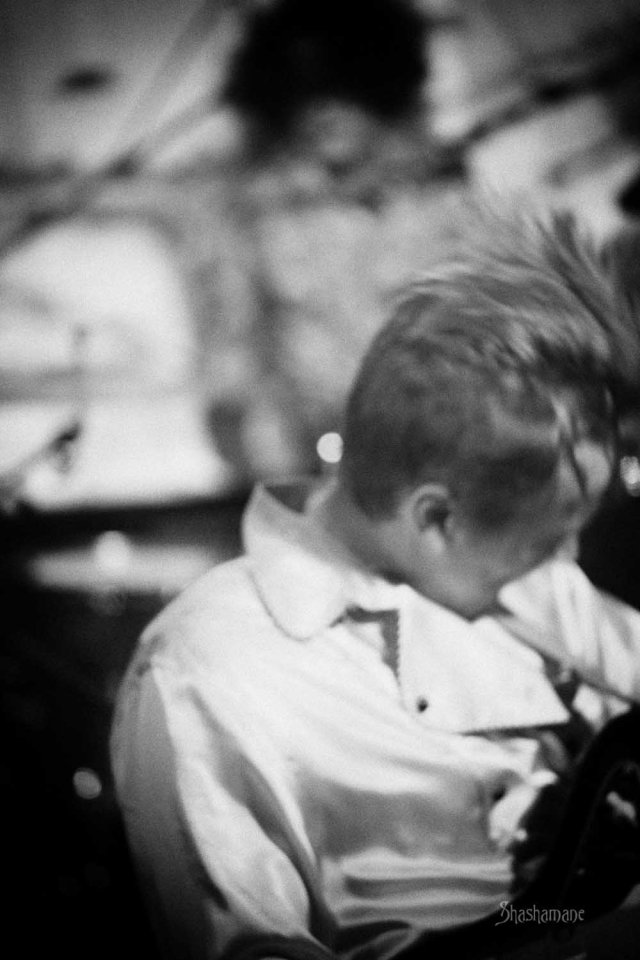 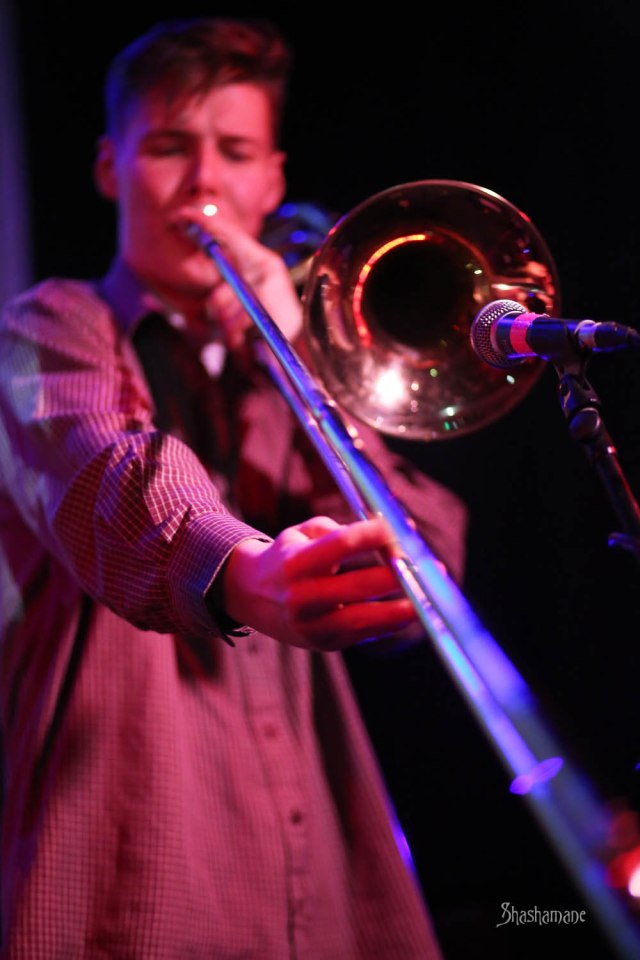 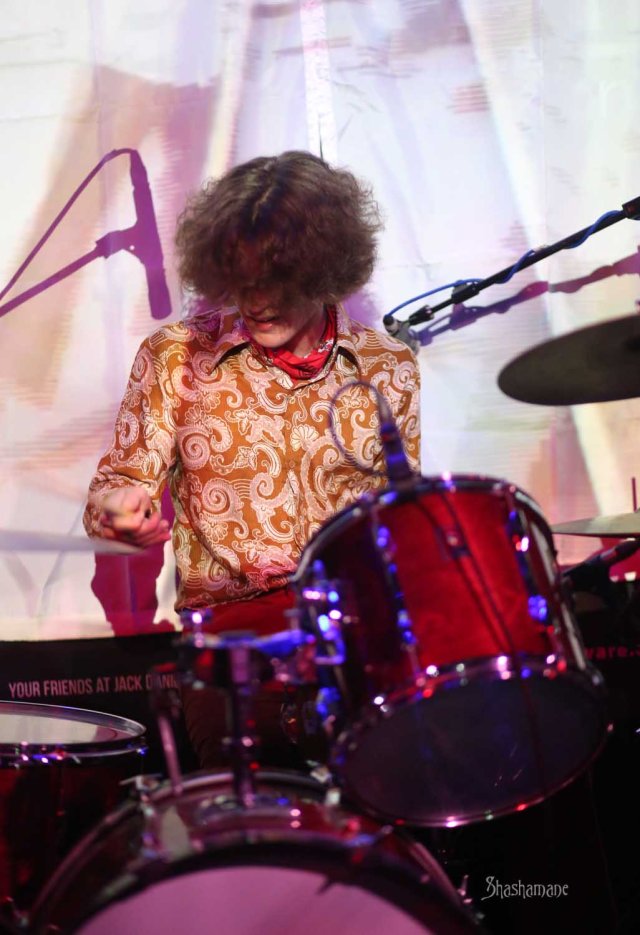