This was Anda Union’s third visit to Norwich and my second time seeing them. Only two nights at home for me since Red Rooster I was certainly feeling the tiredness but was glad I made it out (it was never really too much in doubt) and pleasingly the attendance for the gig looked very good, especially for a Monday night.  Over the course of two sets of 50+ minutes or so they played a wide breadth of traditional Mongolian folk music covering the subjects of horses (plentiful), drinking (a lot), as well as celebratory events, dances, laments, ancient song competitions, plus family with one song in particular being all about motherhood and the important role of the maternal figure. Many aspects of traditional Mongolian culture were covered.

Clearly they have built up something of a local following in Norwich and this is no surprise as their live shows are fantastic and something one wants to experience again and again.  This was a seated gig but it was standing room only for their return and the audience was surprisingly mixed and spanned many decades.  When the band made their low-key entrance onto the stage the crowd were respectful but a little bit on the hesitant, shy and self-conscious side as is often the case with seated gigs but they soon warmed up and became vocal, especially when the lively, engaging and animated vocalist joined the others and came on for their second number.  It was all fun and connection from this moment on with plenty of engagement, clapping along and even a few whoops and hollers too on the faster songs.

The set was varied in tempo, we had the frenetic (ten thousand) Galloping Horses, traditional dance music, and an especially moving song delivered by another vocalist, her unaccompanied voice was haunting and evocative, the only other sound audible in the hall being from a few birds chirping outside of the NAC which fitted well. It was so atmospheric! There were a couple of other solo pieces by various members too, giving the sets many different layers and opportunities to experience the incredible individual talents on the stage.

During the interval I was asked at the bar how many there were onstage, changing my vantage point for the second set I counted seven, plus the two other vocalists who joined them occasionally for a few songs in both sets.  As well as some incredible throat-singing (it was hard to ascertain where the whistling sound was actually coming from at times) we had drums, flute and a two-stringed fiddle/guitar-like instruments called ‘morin khuur’, the strings actually from the hair of a horse’s tail as was explained during tuning, and indeed with horse head carvings on the neck so they are known as horse-head fiddles.

The styles are rich and varied and from throughout the Mongolian regions. Anda Union do a most fine job of promoting the music and culture of Mongolia and this was once again another fascinating and hugely enjoyable live musical experience.  To my naive ears one or two of the slower, almost shamanic numbers late in the set had a bit of a feel of native American chants what with the vocal style and hypnotic drumming, it was trance-like. Others had a Chinese element to the sound but overall one could only visualise a place most of us have not visited … the Mongolian plains and grasslands, with the important place horses have, and the colourful culture of the land.  Amazing music that can make one fall in love with an unknown region. 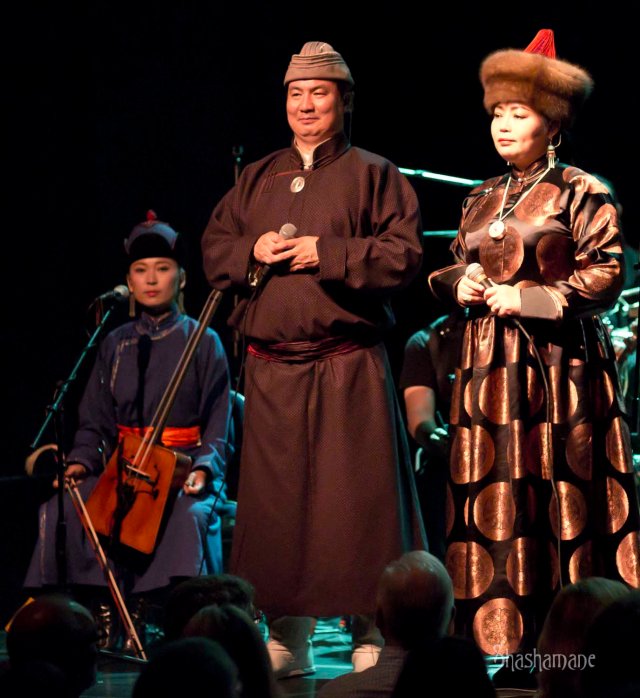 On their previous visit I not only bought the album but also their DVD which I now have a strong urge to watch again. Anda Union gigs are events which are also educational and which give a little window into Mongolian life and culture, they are excellent ambassadors for their land. 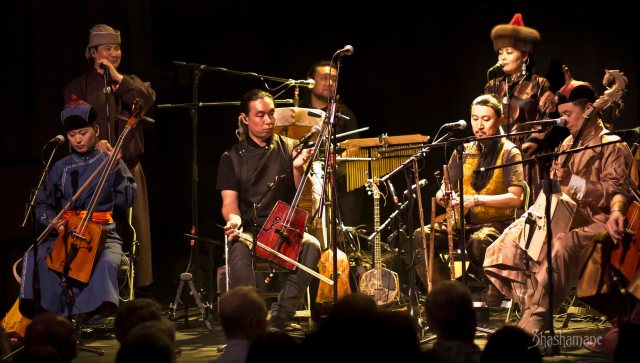 Thanks to Anda Union, and Norwich Arts Centre, I hope to see this magical pairing again sometime, I can’t imagine anywhere better in the city to experience this, who else brings us the ‘real deal’ Mongolian traditional folk and throat-singing?  Anda Union clearly love it here too and they each of them emanate such a warm and positive energy from the stage with their presence, personalities, and of course the music.

Video excerpts below from their previous NAC visit: