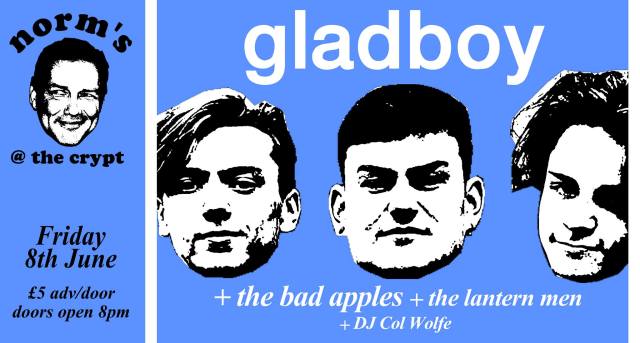 Gladboy will be extravaganzing your Friday night at Norm’s, with special guests, excitement, and GREAT SONGS. Their current single sounds to me like Supergrass playing Richard Hell & The Voidoids “Blank Generation”, in the middle of Pink Floyd’s “Apples & Oranges” instrumental freakout section. That. Is. Good!
———————————————–
The Bad Apples & their drums/guitar/vocals rock’n’roll duo thing have been going from strength to strength over the last few years, and I’ve read the live reviews to prove it! One of the good things about them being a duo, is that it’ll leave plenty of room on stage for me to set up my cookery demonstration. Unless they rock out a lot.. Eggs might get broken.. And hearts.. Hmm, maybe my cookery demonstration will have to wait until I have some more demure bands playing..
———————————————–
The Lantern Men play Broads Beat / Shed Rock / Post Junk / Norfolkabilly (garage rock’n’roll in standard parlance), tipping their hats to Link Wray, Sonics, Thee Milkshakes & The Cramps.
———————————————–
Spoke Records‘ Col Wolfe will be spinning freakbeat, psych, library, garage rock, and all sorts of amazing 45s between the bands.
———————————————–
PLEASE SPREAD THE WORD, and invite all your friends to this event page.

My latest visit to Norm’s at Bedfords Crypt was for the first of two gigs sandwiching Mr. Jason’s birthday, this one featuring Gladboy, The Bad Apples, and The Lantern Men.  A noisy and enthusiastic audience enjoyed all the acts tremendously, in a great venue with Norm’s signature quality sound.

Wroxham’s The Lantern Men kicked things off in fine style with a set of brilliantly trashy garage rock and roll.  A sprinkling of covers from the likes of the Ramones, a superb version of Thee Milkshakes’  Out of Control, and I think Love Potion No.9 was in there too.  This humble band are so good, I can well imagine them playing more gigs on the Norwich circuit and attracting the dancing crowd who will absolutely adore them.  A rocking Cramps vibe at times but also some “East coast” surf.

The Bad Apples launched into their own set with a storming Kick Out the Jams and really engaged the audience with their frenetic, noisy brand of garage punk. This North Walsham duo are getting themselves quite a following.

So too are Gladboy, always playing with great energy, showmanship and the right degree of confidence, so much so that they finished with a song they only put together a day or so before the gig!  The UEA and Norwich music communities have sometimes felt a little disconnected from each other in recent years (lacking a small venue like The Village Barn of old), or at least not as connected to each other as they could and shoule be but that seems to be changing again and Gladboy are one of a number of UEA bands making waves bridging that narrow gap and have made a big impression wherever they play (as have the likes of Phoebe Troup, Laura Goldthorp et al. lately) and that can only be a good thing. They even have a song about Nancy Sinatra too! Next up they have a prestigious support slot coming along when they share the bill with the astonishing Starcrawler at Norwich Arts Center later this month. Exciting times. 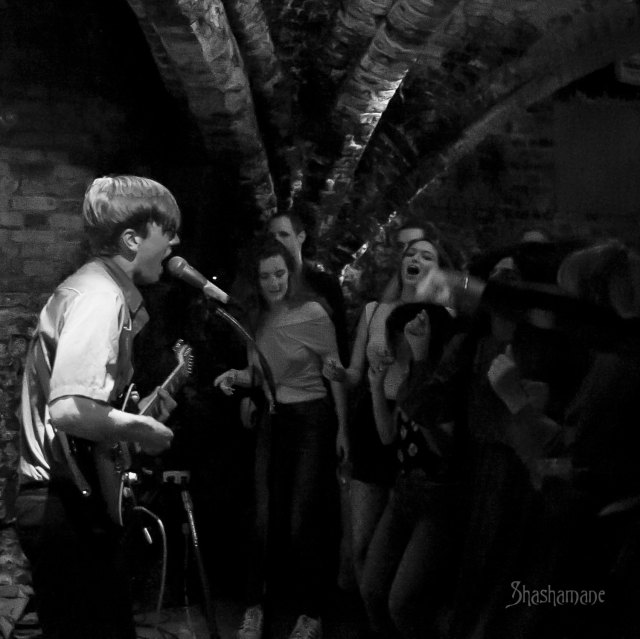 Four gigs in four days since Red Rooster and I was exhausted and in back pain but music always heals and this one had that genuinely exciting edge. For a few years Jug Jaw’s Beat Club used to put on occasional gigs in this venue which were also exciting and unforgettable. Norm’s has now picked up the baton and is putting on equally exciting gigs here, at least once a week in The Crypt. Next Norm’s night and part two of Mr. Jason’s birthday week features Ravenous Hounds, Bag of Cans, Space is Big and a few dj sets on Friday 15 June at The Crypt. 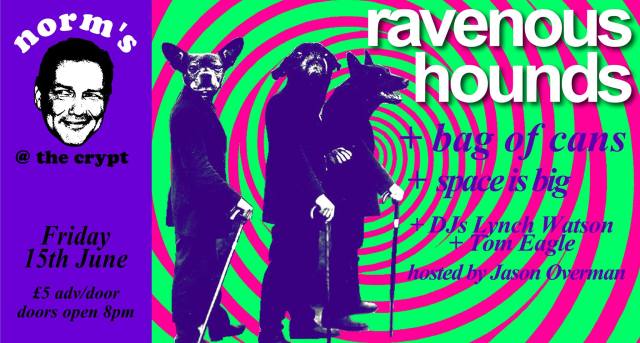