Another terrific lineup for the latest in a packed programme of gigs by Norm’s at The Crypt.  Hot Raisin and Vaudevue are both well known to me but Lazyboy were a new name and I only knew one song by Brookyn’s Fruit & Flowers via their video on YouTube – “Out of Touch” so it was a good blend of favourites and new, soon-to-be favourites.

We’re very excited to bring you Brooklyn’s art-punk, surf-noir 4-piece Fruit & Flowers. They’re known for their electrifying performances, heavy bass, searing guitar solos, warm and psychedelic rhythm guitar, hypnotic drumming and distinctive three-part harmonies. “Chaotic and captivating, dynamic and driving” it says here; and from watching a bunch of videos of them, I’d most definitely agree!
Fruit & Flowers
http://www.fruitxflowers.com/
———————————————–
Vaudevue – girl/boy guitar & drums duo playing grungy indie-rock with catchy choruses. Fun & good.
———————————————–
LAZYBOY “are a 4 piece Indie/Rock band from Norwich and we play music.” Well that’s a relief! Cos I’ve booked them to do exactly that!
———————————————–
I named Hot Raisin, and I couldn’t have been happier that they agreed to use one of the names from my “Dumb Band Names” list. 🙂
———————————————–
PLEASE SPREAD THE WORD, and invite all your friends to this event page.

Just after about 8:30pm when Hot Raisin took the stage, on a lovely evening after a glorious day of warm Bank Holiday sunshine (most of which I spent sitting in the garden reading Viv Albertine’s excellent new book To Throw Away Unopened” which I picked up after her incredible Spiegeltent appearance for NNF18).  Drummer Daryl had just become a father again (Congrats, Daryl!) so it was a four piece Raisins playing a short but powerful four-song set, the first act of four for the night.  Opening with a strong Captain and with Mr. Jason at the helm of the sounddesk they sounded superb and Mary’s effortlessly brilliant guitarwork so clear.  With Luke (playing with a broken hand!) on guitar and Tom and bass, with both providing backing vocals it all sounded full and warm and lovely. As usual it all passed too quickly but it was fun, well-received and sounded just great. 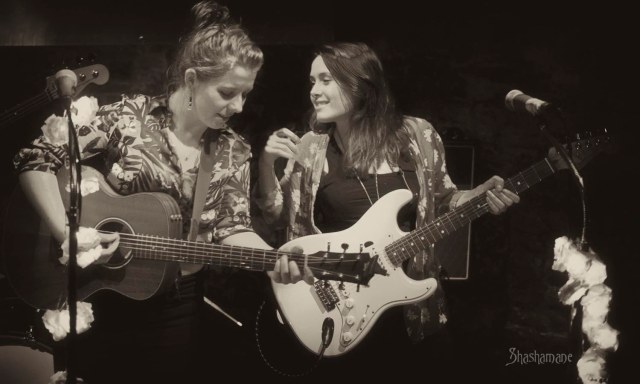 The reason I didn’t know much about the next band – Lazyboy – was not laziness on my part after all but because they only played their very first gig last week, for Sonic Youths at the Arts Centre Bar!  This, of course was their second, not that you’d know it. They sounded strong and tight, a powerful sound confidently played and I was most impressed. Very promising and ones to watch out for (the singer even sported a white Fender that I honestly wondered if it was Mary Raisin’s for a moment!)  And how long before they share a bill with Gladboy?

My introduction to Vaudevue was also through Jason at Old School Studios, a while a back now. I’ve seen them since but not for what seems like ages.  Opening with the song that made the big impression on me on that occasion – 18, Kate reassuringly told us that she had now reached that age, and they too sounded strong and powerful, with Ben on drums they are a formidable live force. I like them a lot. Another exciting band.

What little I’d seen of Fruit & Flowers I liked a lot. Describing themselves as Art-punk, surf-noir their songs are strong, powerful, melodic and a lot of fun. They have something of the Rainbow Girls energy about them which is infectious and positive. As lovely and friendly off-stage as they are on it too. They loved the ancient venue, and though mystified by a surreal birthday chant after the first song of the set they went along with it, invited the birthday boy onstage and jammed a birthday song.  “We have no idea what’s going on but we like it!” They are right up my street and needless to say I left clutching a copy of their splattered vinyl EP along that street home. I love them. 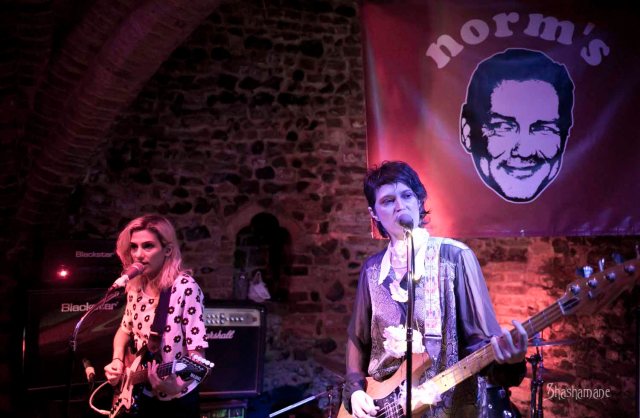 Big thanks to Jason for another top quality line-up with a couple of new introductions for me. In fact, he played a major role in bringing the others to my attention too.  He does the Norm’s thing all over again tonight (Wednesday) …

… and again on Friday.

I started reading Viv Albertine's 'To Throw Away Unopened' late last night. At 3am I was still reading and not wanting to stop. Superb book again. #vivalbertine #tothrowawayunopened #theslits #memoir #books

Can a City of Literature event be classed as one of the gigs of the year? Hell yes! Viv Albertine every bit as inspirational in conversation for NNF as her books. #nnfest #nnf18 #norwich #vivalbertine #cityofliteratureweekendnorwich #theslits #nnfest18 @nnfest @vivalbertine