This was a welcome return to the Arts Centre for A Hawk and a Hacksaw who early in the set, referencing to the blue plaque in the foyer noting visits to this treasured venue by the likes of Nirvana and the Stone Roses questioned if they themselves might qualify for a plaque “For most visits … we’ve played here something like 25 times”  That might possibly be an exaggeration but this was at least my third time of seeing them here albeit not since 2013 or so when they performed a live score to a film screening of Shadows Of Forgotten Ancestors, so this felt well overdue. Personally, this was my seventh gig in seven days, with two of them on the same day in London but I am so pleased I didn’t miss this one.  Though tired beforehand this gig energised and revitalised me and I was putting this post together as soon as I returned home.

Having already planned on being at this gig anyway I was thrilled to discover a week or so earlier that the support slot was once again filled by one of my absolute local favourites, just it was was when Hot Raisin supported Marty O’Reilly. This time it was the brilliant Phoebe Troup.  With only two of her songs recorded and out there in the weird wired world of the internet she may be a name unfamiliar to many but a memorable one to any who has been lucky enough to hear her play.  She has a fine and clear expressive voice, a beautiful guitar style that she makes look deceptively easy and has elements of Appalachian folk and bluegrass with a unique sound and style all of her own … but oh, her songwriting!  I think she is a natural poet but her Creative Writing degree won’t have done any harm in her lyric writing. When the songs draw you in on one level, beyond that it is the exceptional quality of her writing that catches you hook, line and sinker with some wonderfully descriptive lines and turns of phrase. This was one example that did it for me when I first heard it some years back: “There’s a girl behind the counter, who loves a boy born in July”  and she’s also the only singer I have heard successfully include such a playful phrase as: ” Well, I’d always love your muddy hands and slightly sunburned cheeks but you’d probably want to try some other composting techniques … but nothing lasts forever that’s just not how shit is made” into a verse. Always descriptive and evocative though, she paints pictures and stories with words, voice and guitar notes.

Having lived in mountainous Colorado and then the much flatter geography of Norfolk the natural elements and her love of nature always feel present in her song settings. Painting vivid imagery with her words which tell stories full of emotion and sensitive characters questioning the world and the people around them.  I’m extremely drawn to songwriting of this nature and I file and treasure Phoebe Troup alongside the likes of Gillian Welch, Milly Hirst, and Courtney Marie Andrews, and even some Townes Van Zandt. I cannot give higher praise than that, and anyone who knows me knows how much I love the works of these artists.  They are all singers performing songs they mean and feel deeply, giving a voice and expression, tapping  into something deep inside the soul that the connected listener feels and relates to but cannot always express themselves and this is so cathartic to hear in a song.  Phoebe does this with great purity. Emotional, honest and hearfelt expression, and all the better for it. The tiniest musical pause early on didn’t faze her in the slightest and she proceeded to play flawlessly and sing beautifully, winning a lot of new fans in the process. On the NAC stage she was charming and deservedly received a very warm ovation from the crowd at the end when she closed with Come Back Deer Tick (“This song always makes me cry. I’ll try not to.” She held it together.)  Tellingly, when A Hawk and a Hacksaw came onstage a short time later and thanked her for the set, they added: “Phoebe Troup is probably the best support act we have seen on this very long tour. Thank you, Phoebe!” which was a touching recognition.  I’m in no position to feel any sense of pride but I kind of did.  Having seen her many, many times over the last four years this was certainly the biggest gig and stage I’ve seen her perform at. I felt pride because she did herself proud. Hearing these songs which are like novellas put to music and full of feeling in an achingly beautiful expression to a largely new audience. Phoebe Troup is one of my favourite artists and I think all who were seeing her for the first time here shared the delight of this set. That really was a very warm and prolonged ovation at the end. Always modest and unassuming she looked genuinely surprised and touched by this reception but she richly deserved it.

A Hawk and a Hacksaw are a male and female duo from Albuquerque, New Mexico. Their entry onstage was quiet and unassuming as they gently eased into the opener, with violin and what I thought was a dulcimer.  Humbled when I later heard Jeremy Barnes explain onstage that it was an oft asked question but was in fact an Iranian Santur. But then subsequently learned that this in fact means it is actually a Persian dulcimer. The metal keys are hit with what appear to be metal rods and alongside Heather Trost’s extraordinary violin playing it created a sound that was captivating and evocative with a Turkish or Kurdish flavour.  The styles changed throughout the set becoming more eastern European with the addition of accordion or drum, ranging from klezmer, polka and Balkan by way of songs about a manic black cat and its nocturnal activities (we know it is a black cat as an audience member asked if it was and Jeremy confirmed so. People with black cats just “know”), and also a folk song about witches, played with some incredible violin from Heather which was as captivating visually as it was to listen to.

This is such a creative video, on the theme that reminds me of Bowie’s Major Tom character.

I have many fond memories of travels in eastern Europe and some of these songs took me right back there. The drums reminiscent of music I heard in Georgia and Armenia, and other segments of the set with violin and accordion making me think of Poland and Slovenia. The set was fascinating throughout, and the band really relaxed into it when they started engaging more with the audience about half way through, asking if we had any questions but then asking us questions.  This gave an even greater connection with the audience. We had a little discussion about the distinction between counties and regions, cities and towns, and when we had all that established they told us that Norwich was one of their favourite cities, that Norfolk was the best county with the best trees, and that they loved the region of East Anglia. They do love trees and I was charmed and delighted when Heather drew a tree on the cover of my newly acquired vinyl copy of Forest Bathing, which I can add to the other albums I bought on some of their previous visits.  There was also a hilarious tale about life on the road, in particular concerning a pedalboard which they wrapped in a towel but fogot to pack, leaving it on the bed of a hotel room in Manchester.  It was “put into prison” as a suspicious device until all was explained and it was paroled. Now been reunited with them and onstage here. The NAC wasn’t full but it was a Monday night and the weather as bad as I can remember for this stage of spring but the night was all about the quality and this was a beautiful evening. Both sets will live long in my memory and everyone seemed charmed, thank you Phoebe, A Hawk and a Hacksaw, and of course, NAC. 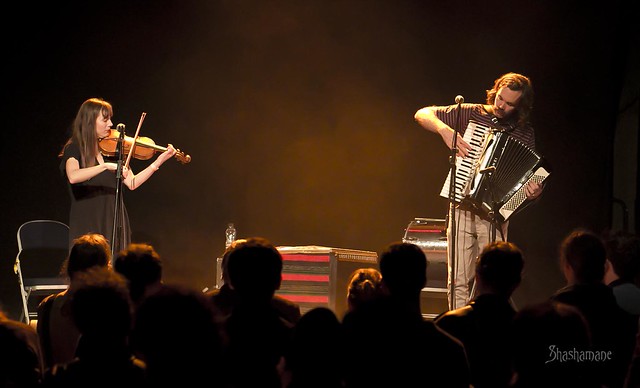