A highly successful WOW Norwich Festival weekend celebrating women of the world featuring talks, seminars, podcasts, discussions,  workshops and parties in a packed programme which closed on Sunday night with a Pony Up gig at the OPEN Club Room whilst at the same time a WOW festival special True Stories session was taking place at the Arts Centre.

As I made what I think is now the traditional journey into the city in the all too familiar rain on a wretchedly cold, damp and wintry late April evening it was Maya Law who was opening to a modest but enthusiastically attentive and appreciative audience.  I read a review a few days ago by Outline colleague Stuart on her support slot for Akala at The Waterfront and totally agree with his fine words.  Also, due to Stuart re-introducing me to the nerdishly addictive delights of Setlistfm I know I have seen Maya ten times but not since late last summer at Harlequin and my feelings too were of how her confidence onstage seems to have grown and it’s exciting to see how she has developed so much as an artist in such a short space of time. She’s always had a strong voice and delivery but there is an even greater strength and assured edge now, as well as a distinctively Maya Law quality and signature to it, with some likeable onstage Amy Winehouse traits too though it is very much Maya her own person that we see onstage. She played a mix of new and old originals with the odd cover thrown in. Initially playing guitar, for the final three or four tracks she sang to some taped beats (with Woody Guthrie’s “This machine kills fascists” scrawl), and she seemed even more powerful in this segment of the set, if that were possible. Premiering a brand new song and the strong new single Give Me No Love, which is released on Monday, a collaboration with Gabriel Gifford which needs to be heard.  Highly impressive stuff from one of the city’s finest young talents.  I was quite blown away by her set actually, a mix of sweet, personal, honest, confident and defiant, open songs that went down very well indeed with everyone present. She’s got it. She’s definitely got it.

Checking the aforementioned Setlistfm when I returned home I discovered it is only just over a year since I first saw Yassassin (supporting PINS at NAC) and yet this was already their fourth Norwich gig. I have seen all of them.  Since their last appearance in November at the Waterfront Studio they have had a personnel change or two (Nathalia and Stephanie joining on bass and drums) but everyone seems to have assimmilated seamlessly. Their melodic, infectious post-punk energy and spirit intact and as lively as ever.   It was a blistering, fun set that passed all too quickly.  There are plenty of messages and commentary in the lyrics but we also had a surreal appearance from a certain Stanley the Cactus.  I’m not quite sure what that was about but it provided a suitably bonkers element to a powerfully strong gig from one of my favourite live acts. The new line-up works really well and it’s encouraging to hear them already playing some brand new songs. 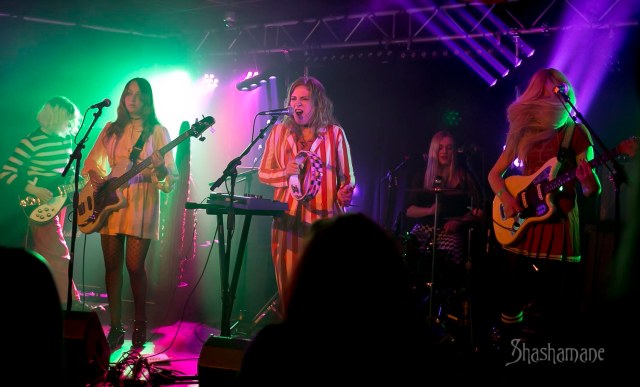 Thanks and congratulations to Rosie, Annie and all involved at WOW Norwich.

The previous evening I headed to Cactus Cafe Bar for OosWolf and Shane O’Linski’s birthday gig, featuring the new line-up of Stromm.  Now augmented by Dave Indge and Chad Mason. I think this worked a treat and it was the most impressive I’ve heard them, a fuller sound with a whole new dimension. Think Low meets Radiohead meets Abbey Road/White Album-era Beatles.  Closing the night was the Olinski Osomble featuring, well, just about everyone. We even had a couple of covers, including the most unique Leonard Cohen cover I think I have heard (Everybody Knows), and The Beatles’ Ringo-penned Don’t Pass Me By.  Great fun as always in this wonderful venue and the inimitable OosWolf night. There was a lot of love in this place for Mr. O’Linski. Happy birthday, Shane.

David Indge has a film screening and live score to accompany his amazing Coast Road project photographic visuals at Cromer next weekend. Details below.