Courtney Marie Andrews in undoubtedly one of my favourite musical discoveries of the past few years, first coming to my attention on an outstanding live KEXP session but she’s been productively busy for a good ten years or so already. Originally from Arizona, I believe she is now based in California, arriving there via Washington. This leg of the tour is already her second UK visit of the year having recently played at the UK Americana Awards where she won the  International Artist of the Year award.  I feel the new album leans more towards soul and gospel than country although there are certainly country elements as well as folk and rock but it doesn’t matter about labels, what matters is how good the music is and to quote an audience regular it is “Bloody marvellous!” Musicians at the top of their game and that incredibly expressive, emotive voice all bringing these stories to vivid life. It’s quite mesmerising. She has her own sound and style with a distinctive, exceptional voice and those captivating stories, and some social commentary.

I was lucky enough to see her perform a solo acoustic set in Norwich when Loose Records brought her and labelmates The Handsome Family to the Arts Centre in February of 2017.  Her set really blew me away and left me yearning for a full set so I made my way to London’s Bush Hall in September for an outstanding full band performance.  Chatting to some of them after that show I learned that at the end of the tour they were going into the studio to record an album featuring some of the new songs featured in the set that night.  Just six months later May Your Kindness Remain was on the shelves and the band back on the road yet again.  They are some of the hardest working and productive musicians I know, seemingly permanently playing live and producing new songs. 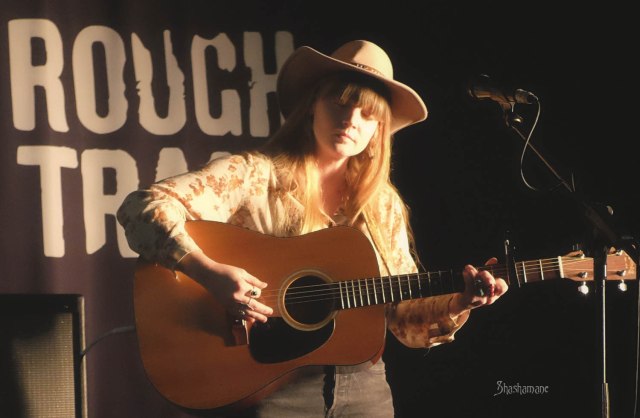 Honest Life was definitely among my favourite albums of 2017, in fact I’d call it one of my favourites of all time, I never tire of it.  May Your Kindness Remain continues the brilliant lyrical storytelling and the album has a feeling of soul, blues and gospel too.  Admirers of Townes Van Zandt should definitely check out the characters and stories in the songs of Courtney Marie Andrews.

When I heard she was returning to the UK with the band and playing at Islington’s beautiful Assembly Hall I could not resist the temptation to go.  A Norwich date at the NAC in August has subsequently been announced but I reckon I’d have still come down to London for this show anyway.  Quite by chance, I learned a day or two earlier that she was to play a free solo acoustic lunchtime set at Rough Trade East on Brick Lane so this was quite a bonus.  A great record shop with not only a proper stage area and PA but a bar selling beers and coffees too, not to mention the vast selection of vinyl, CDs and other music-related items.  I could easily spend quite a lot of time, and money, in this record store, and already feel another trip to the capital calling purely for this purpose … if only I could afford it.

Rough Trade around the edges. How's that for a free lunchtime gig? The mesmerising words, songs, and voice of Courtney Marie Andrews at Rough Trade making the early start from Norwich very worthwhile. Seeing her again later at a sold out Islington Assembly Hall. #courtneymarieandrews #mayyourkindnessremain #roughtrade @courtneymarieandrews @roughtradeeast @loose_music

One of the songs she played in this set (I believe it may be called Love, the Only Debt) was one she introduced as not having made the cut for the album, about a family member with cancer (thankfully now in remission) and I’m quite amazed at the calibre of song which doesn’t even make the album, which tells you what quality the songs are that did make it on.  One of them being the “sarcastic love song”  I’ve Hurt Worse, about choosing the wrong partners and with the almost heartbreaking line: “Mother says we love who we think we deserve” which touches on feelings of self-esteem and self-worth. So many of the characters of the songs are ones we can easily empathise with or relate to.  You can tell she is a lyricist who feels things deeply and expresses it like the true artist she is.

“Rough Trade around the edges…”

Last year she sold out two nights at Bush Hall and repeated the feat by filling the Islington Assembly Hall on a Tuesday night, a venue which is about twice the size of Bush Hall. A high stage meant the sightlines were good everywhere but the bar prices were something of a sobering shock.  Friendly staff and security, it is a glorious setting with a large balcony and charming features everywhere, even the toilets are incredible!  It has an interesting and varied programme of events too, upcoming gigs include Drenge, Johnny Marr, Femi Kuti, The Vibrators, and Dubioza Kolektiv!

A lot of my personal favourites featured in this set, including Table for One, Rough Around the Edges, This House, Kindness of Strangers, Took You Up, Near You, How Quickly Your Heart Mends, May Your Kindness Remain, and I was delighted to hear Let the Good One Go in the encore, along with Irene and a cover of Little Feat’s Willin’.  When I first heard the tender and charming This House I welled up at some of the imagery and emotions I felt and the sentiments shared.

For every rose there’s a weed, but every weed is welcome
This house ain’t much of a house, but it’s a home

The faucet might leak, the staircase might creak
The heater takes a while to kick in
But there’s a whole lot of laughter and love
This house, this house is our home

As for this line: “Tucker’s buried in the yard under that old oak we carved”, well, that certainly had me thinking about much-missed and much-loved pets.

I think it was the emotion and the story of Table for One on that KEXP session that really pulled me into her world, and the reception that greeted this one suggests it’s a special one for a lot of other people too.

The gospel-y Kindness of Strangers is another example of songwriting that resonates, with verses like this:

Although there was quite a mix among the audience I noticed that almost the entire front row of both gigs I saw seemed to be predominantly in the 45-60 age group (and I’m well aware I fall into that demographic) but the more ‘mature’ age group was particularly well-represented and I was pondering this and although the music has some feel of the 70s (especially in the fantastic production on the recordings) I realised that despite being about half their age Courtney’s songwriting is able to articulate the emotions of loss, loneliness and sadness that really resonates with people who’ve had many decades of life experience, maybe been emotionally hurt and carried those feelings. These songs speak to people, I am very drawn to songwriters who can convey the words and feelings of the dark nights of the soul that I myself cannot express. Milly Hirst is another fine example of such a songwriter who makes melancholia in music something very beautiful.  Rough Around the Edges is another one of those songs that just speaks to us. (“Curtains closed so I can sleep in lateNothin’ on the TV, but it always plays, Dirty dishes, buds in the ash try, Don’t feel like pickin’ up the damn phone today, I’m feelin’ rough, rough around the edges, Honey I’m rough, rough around the edges”). That’s not to say the songs are depressing though a lot of the songs carry a positive message, there are splashes of humour, smiles aplenty and there was quite an uplifting feel about the gig. She has that special gift of connecting people and to people through song. It was a beautiful occasion, Courtney all in white, the mic stand adorned with flowers and a whole lot of love from the audience.  The new songs have a positive theme of kindness linking them and we sure do need a lot of that in these strange times. Like the Rainbow Girls‘ message on American Dream, with bonkers leaders and demented out of control governments in both the US and the UK we as people need to focus on what unites us and just be kind to each other. Don’t let politicians divide us. 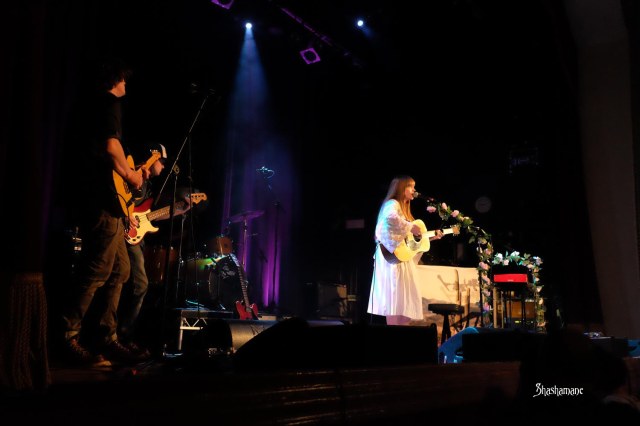 Courtney Marie Andrews restores a lot of faith in music, her talent and ability shine through and it is heartwarming that years of writing, recording and relentless touring is paying off and it’s good to see her hard work rewarded with ever-growing recognition. Quality rises to the surface. There was a particular feel about this gig and a sense of something happening. Each time she plays London it’s in a bigger venue and she’s selling them out too. Completely undaunted by the bigger stages and audiences she and the band positively thrive on it. Inspiring stuff.  A word too about that excellent band, all of them are superb musicians understated yet technically wonderful. Flawless playing and keeping the balance and dynamics just right, allowing Courtney’s stunning and unique voice take centre stage. There’s a tight connection between them all that I pick up on. Nobody’s being flash and showy just letting the music they are all being brilliant. Utterly brilliant. I keep wanting to mention the drummer, the guitarist, the bassist, the keys player but it’s all of them and the loud cheers for each of them in the introductions showed how much they are appreciated by the audience. They are amazing. Really good people too.

I actually bought a record I already own just so I could get it signed, that’s how much the songs and message of Courtney Marie Andrews means to me. She’s writing meaningful music that means a lot to a lot of people.

I’m already looking forward to her return to the Norwich Arts Centre in August, plus she’s one of those that knows Norwich rhymes with porridge.

Thanks to all the staff at Rough Trade East and Islington Assembly Hall who all added to the enjoyment of the day by being so friendly and lovely. Thanks especially to Courtney Marie Andrews and the band.