The previous week there were a number of gigs at the Owl which I’d hoped to make but a number of factors – mainly the weather – meant they were either cancelled, became low-key, or I just wasn’t able to attend, which is a shame as the Owl is due to close on the 1 April (surely, almost everyone thinks this should be taken on and run as a co-operative or collective? Its loss would be more than sad but seems so avoidable). Anyway, I made up for lost time with a number of weekend gigs and for this Odd Box Promotions event there were three bands I was seeing for the first time, including headliners Gladboy who have been causing quite a stir and buzz on the strength of their recent live shows. 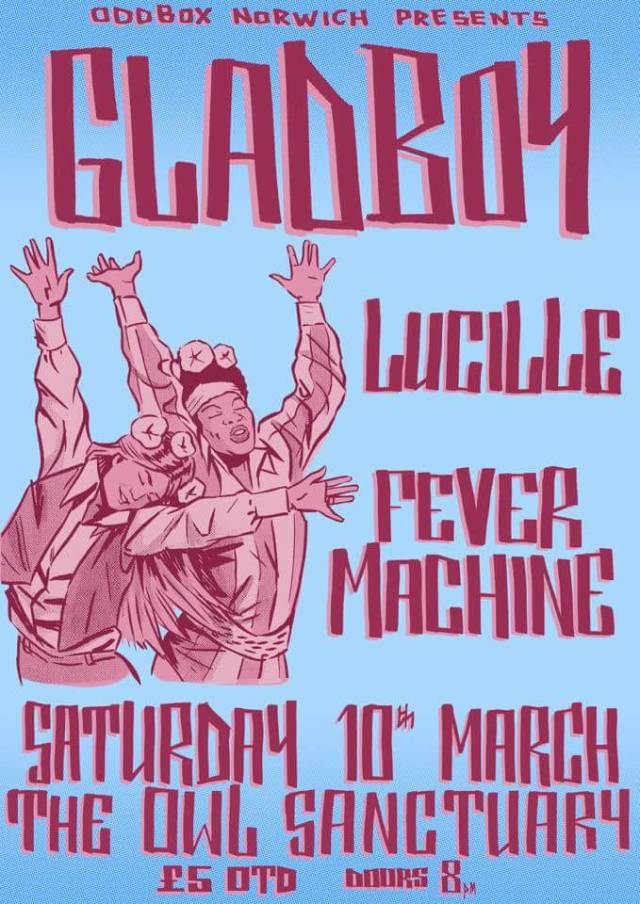 First onstage were Fever Machine, playing only their second gig.  I immediately recognised Violet Kicks’ guitarist but here he was playing on bass.  They had a post-punk style and sound that appealed to me. A little quiet on the stage-presence front in comparison with what was to come later with Gladboy but very enjoyable though and I like what Fever Machine are doing and will look out for them again. 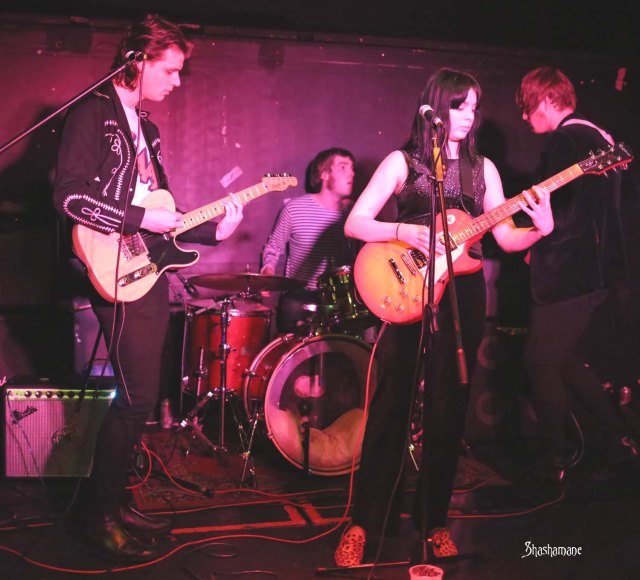 The mysterious and darkly intriguing Lucille has risen from the ashes of Organisms, with Joe and Alex from that band, plus Lucille herself of course, on lead vocals. There’s also the addition of a few others, one of whom couldn’t make this gig and another being Iain Lowery on keys and backing vocals.  I liked this set a lot. There isn’t much information about them on social media but there is something about that I rather like too, just heightening the mystery. I very much look forward to seeing Lucile play again, these songs had a feeling, mood and atmosphere I found myself getting lost in. That’s always a good thing in my book. 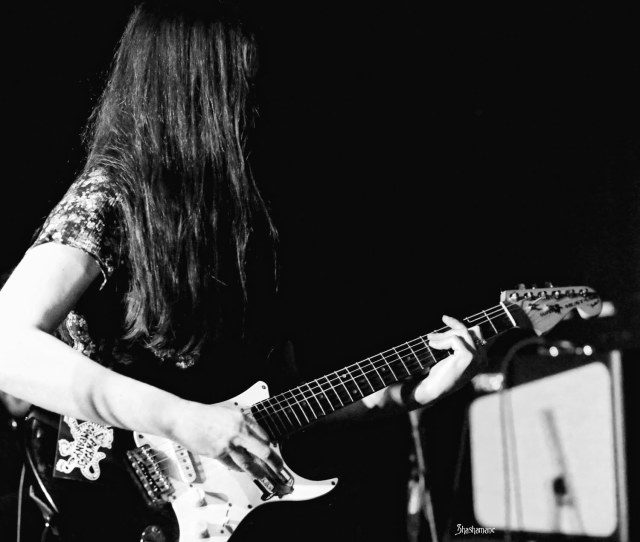 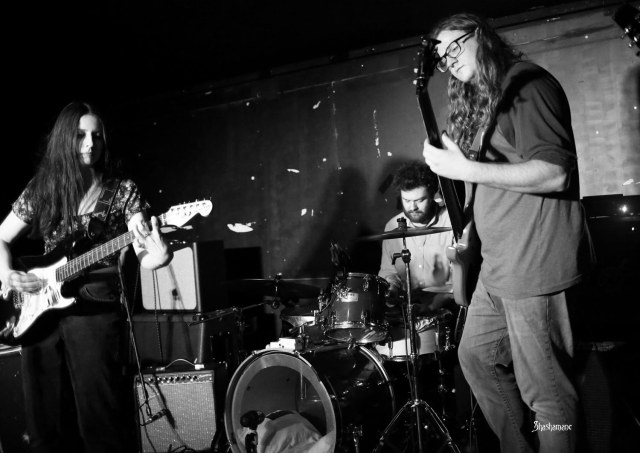 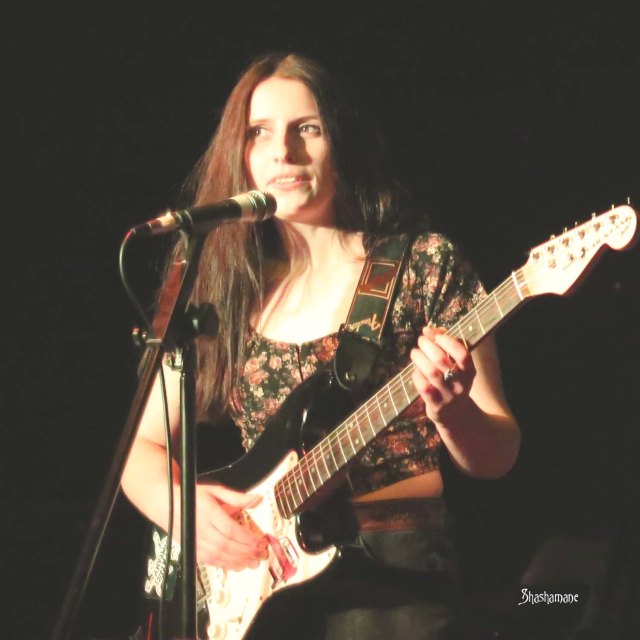 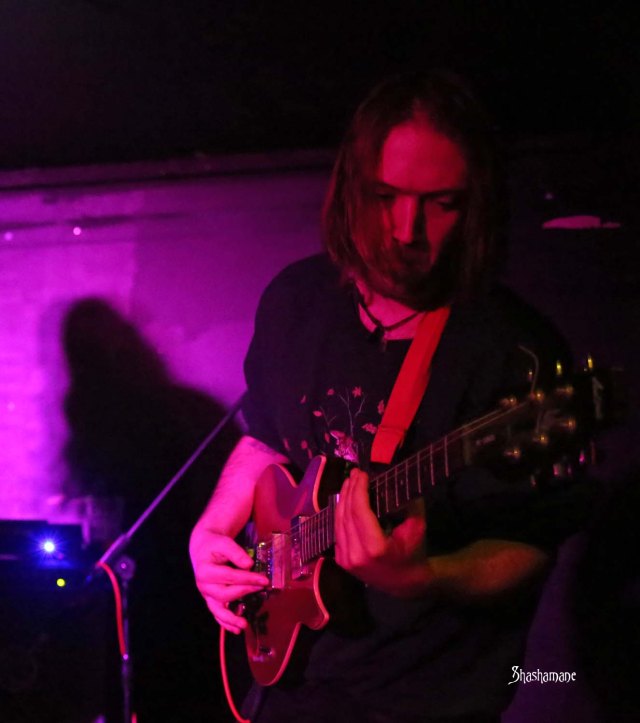 George Orton of Gladboy is someone with a great musical family pedigree and someone I’ve seen at a few gigs in the city but this was my first opportunity to hear his band perform live, there has been a lot of buzz on the street about them and it didn’t take long to see why. As well as the great songs and playing they have buckloads of presence, some attitude and a refreshing, unapologetic self-belief and confidence that shows itself in the best of ways, the joy of performing the songs and involving the audience. They are charm itself actually and very likeable. George and the drummer are animated dervishes and frequently swap roles on drums and guitar (and keys too), whilst the bassist is the more grounded perfect foil.  A number of earworms in their set and they definitely have something about them. Getting the whole of the Owl upstairs room dancing and jumping about (and also getting them all to sit down on command!), with less than a dozen gigs under their belt they already have a strong local following and a strong set – with this as their first headline – though they did exhaust their entire catalogue though and for the much-demanded encore they had to go around again and play one of their songs a second time, and these songs are so good that there is absolutely nothing wrong in that. Fun, melodic, catchy garage rock. Describing themselves as a “junkadelic trio” they are another name to add to the ever-growing list of Norwich must-see bands. Now I want to see them playing on the same bill as HANK, that would be amazing! 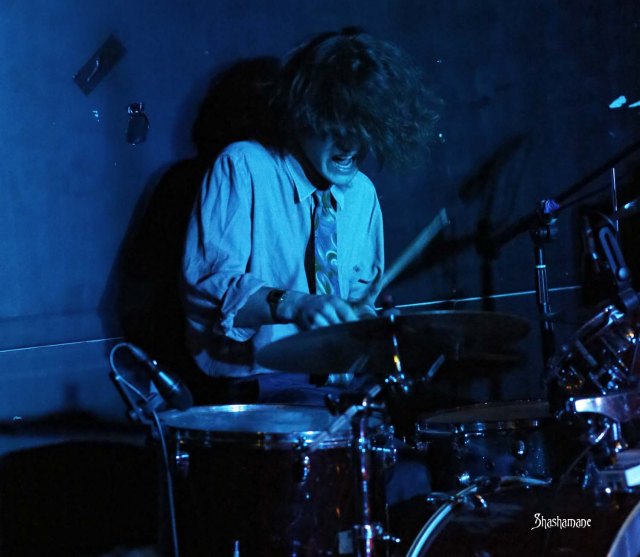 A good choice of music for the mixtape between acts too with some reggae and dub. 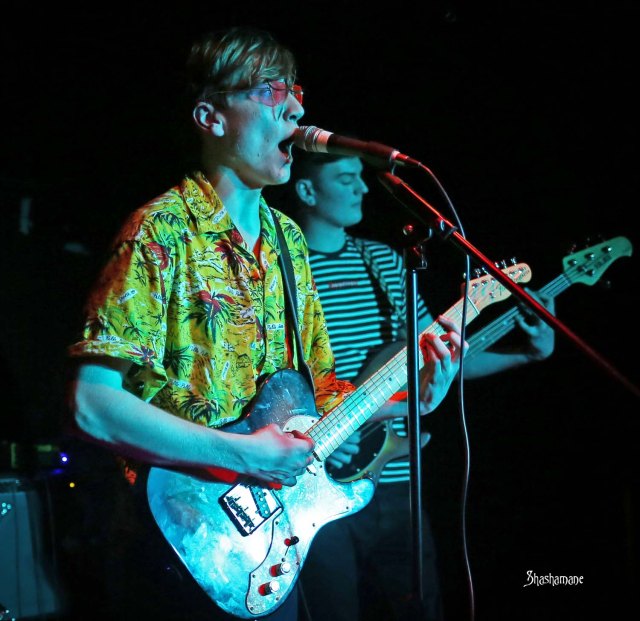 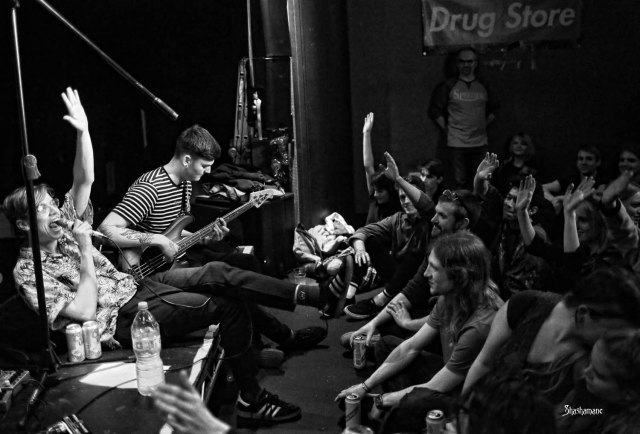 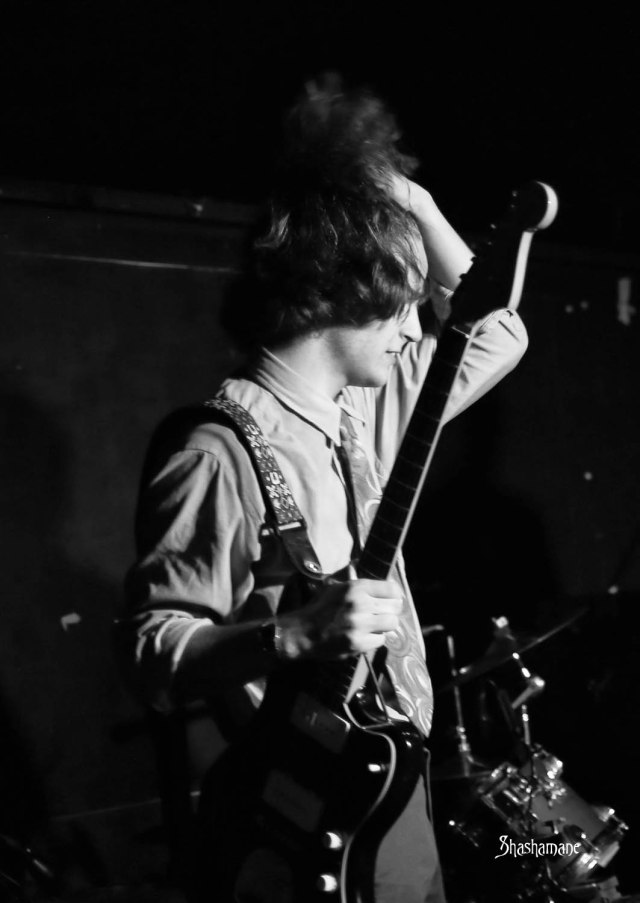 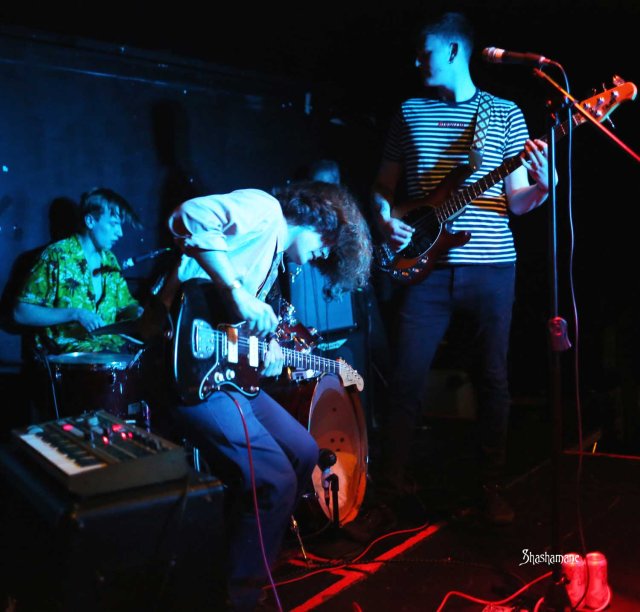 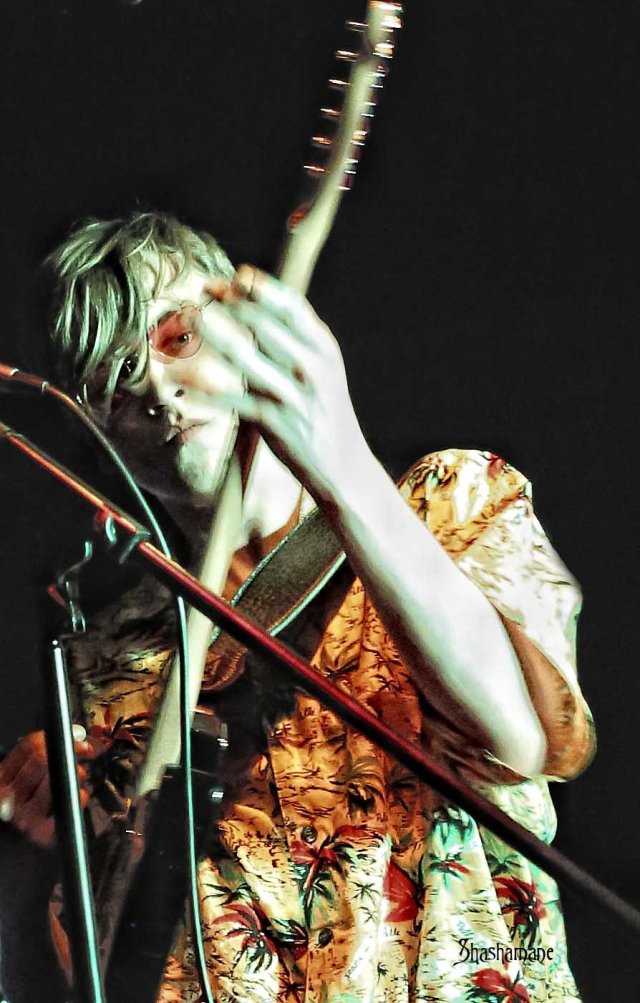 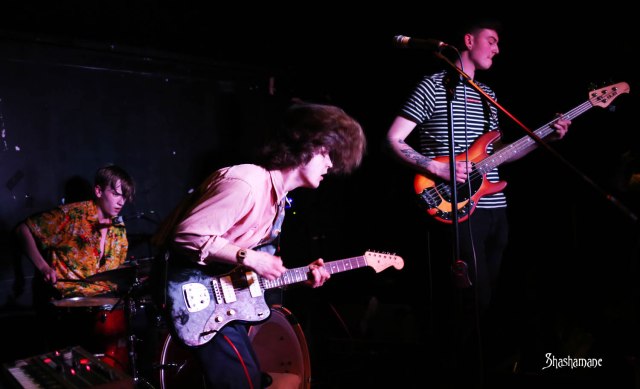 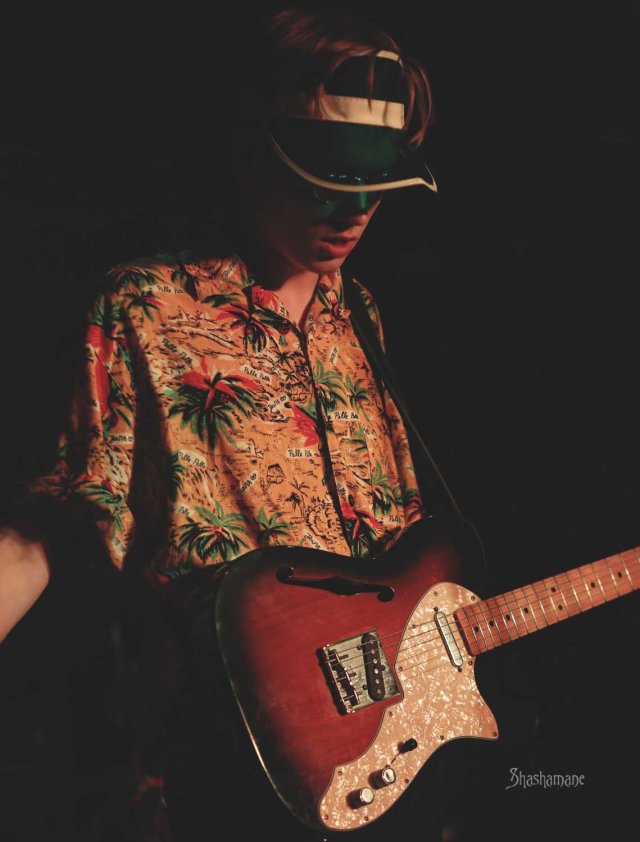 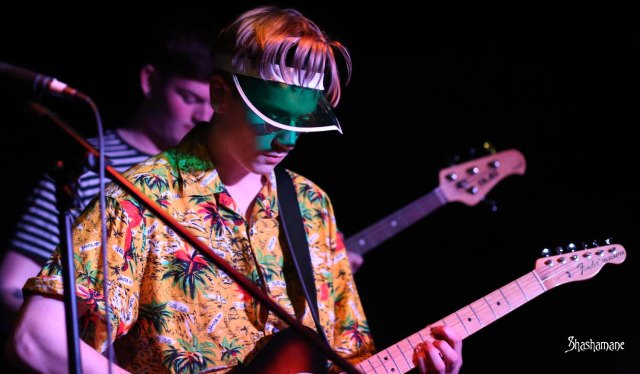 Earlier in the week, with most of the snow now gone and gigs back on again I attended the Bicycle Shop’s handlebar which was absolutely rammed for what was the first of a new regular monthly acoustic showcases.  I am delighted to see the return of live music here and thank the lovely Phoebe Troup for putting it all together and making it happen.  We were treated to five hugely enjoyable sets by DLore, Billy Lubach, Softhead, Louis Cummins, and Phoebe herself. It was just lovely. It’s been a while since I heard Phoebe perform so this in itself was a big treat for me and all present. DLore will be known to many from The Piratones so check out his awesome solo work too. Billy is wonderfully talented and creative, a video is linked below too. 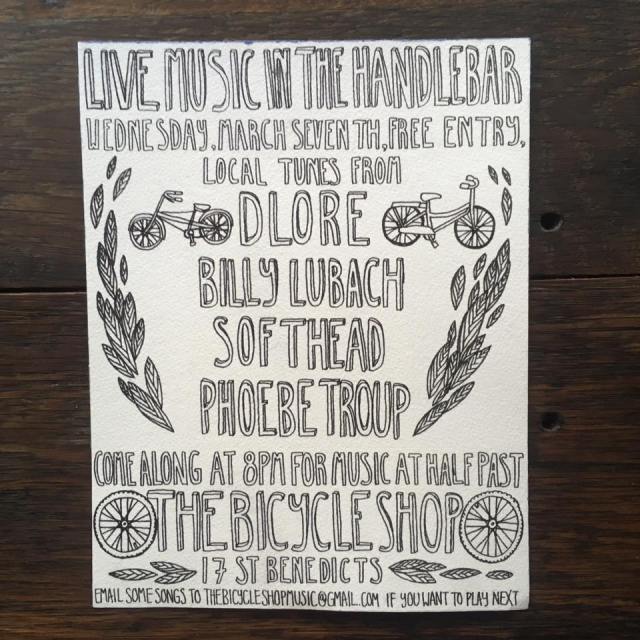 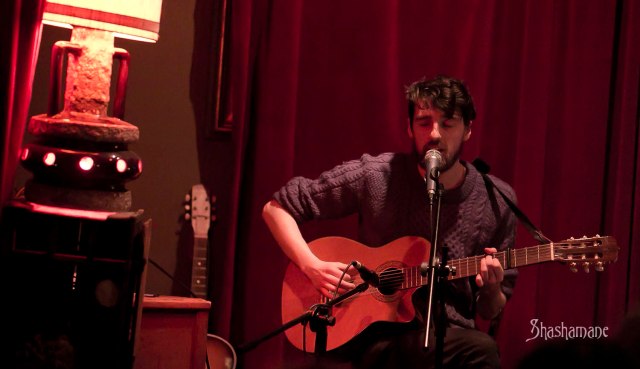 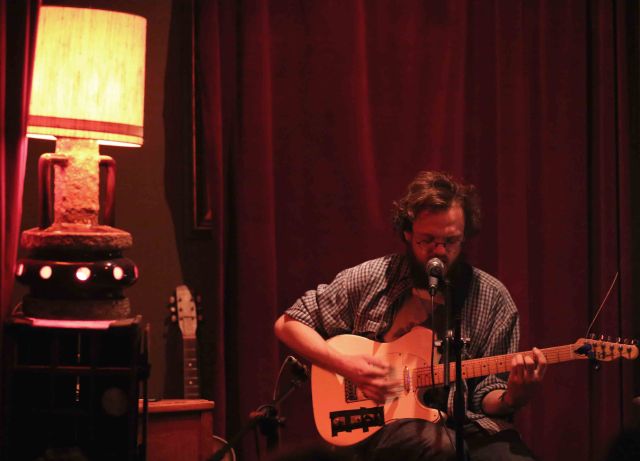 Free entry but a donations box is passed around at the end to collect for the musicians.

On Sunday I visited one of my favourite pubs – The Stanford Arms in Lowestoft – for a couple of sets by Hot Raisin. Great fun as always and nice to hear airings of almost every Raisin song plus the covers that only get occasional plays  … These Boots are Made for Walkin’, Miss Ohio, Hit Me Baby One More Time, and Laura Marling’s The Captain and the Hourglass which is one of my favourites of hers.  Nice to hear their own Captain too which sounded really fresh. This is one of the songs that I heard when I first saw Hot Raisin that drew me into their world and was an early favourite.  For this gig they brought along their new dog, who was a total delight and barked along with the applause 🙂 A lovely afternoon with top music and top company in a great pub.

Arriving back in a drizzly Norwich at about 8:30pm I was actually just in time to catch most of the Frank’s Bar set by Of the Clay. It was relaxed and quiet in there and really suited their sound. I was captivated and felt the souls of the songs, characters and the stories through their voices and playing. The Sunday evening atmosphere was perfect and the music just beautiful.

The music still wasn’t over though and I was able to catch some of the Platform Twelve night hosted by Peter Turrell, as well as catching up with some good friends who also happened to be there. 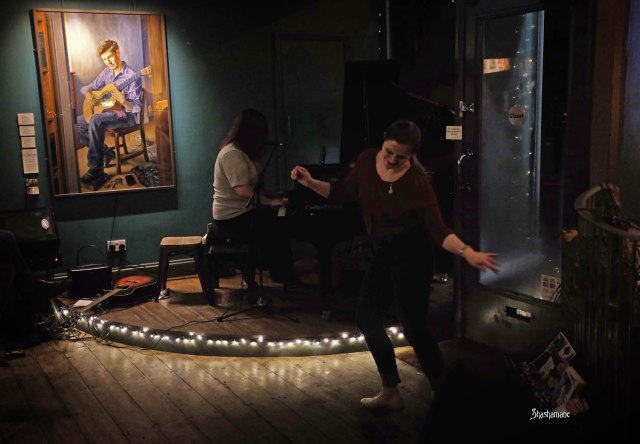 Peter will be reviving the Lights Out nights which were hosted by Pedz before he moved to Bristol. It will now be held in the Louis Marchesi Crypt and will be acoustic, unplugged and played in candlelight. Entry for this too is by donation. 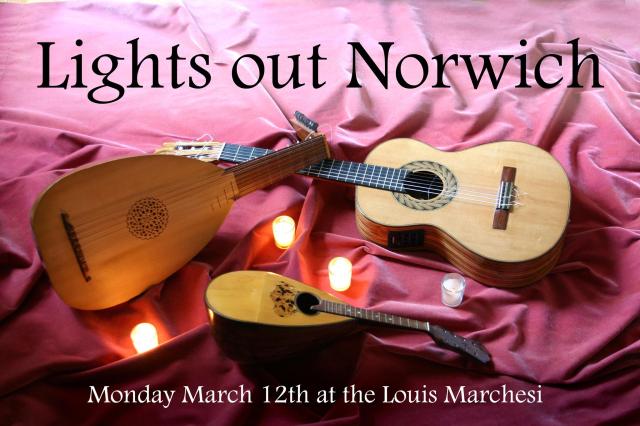 The first of these was on Monday but in a quite untypical Monday nigh gig-clash I was unable to make it as I had already planned to be at the Playhouse Bar to see Painted Heathers and Gnoomes. That’s right, Gnoomes who have previously headlined the NAC and OPEN were playing for free in the Playhouse Bar on a Monday night, though again donations were encouraged to cover their travel expenses (they drove from Bristol and the next night of the tour was to take them to London). Thanks to Print For the People for putting this together.  I saw Gnoomes at that NAC gig in 2016 and had a lovely chat with them afterwards.  I was somewhat taken aback when talking this time they said they remembered me from that occasion and proved it by telling me the t-shirt I wore then!  The new album is on beautiful green vinyl and the signed cover sits proudly in my record collection.  When they played OPEN last year it clashed with Red Rooster so I unfortunately missed that one but they have a genuine warmth and fondness for Norwich (which is mutual) so I do hope they will be back again, they sounded amazing here. Now playing live as a four-piece the sound is a bit more electro and krautrock but still with superb crashing guitars and solid drums. A very professional act and truly lovely, friendly people.

Thank you @printtothepeople for having us for the third time in your beautiful and cozy city! And @theplayhousebar is such a nice place! Hope we'll come again soon! . Meet us in London today at our last U.K. show at The Waiting Room (Stoke Newington). . Stage times Doors: 8:30pm Kalli Ma: 9pm Gnoomes: 10pm #gnoomes #gnoomesontour #rocketrecordings

Painted Heathers in support continue to impress and sound better each time I see them, with a new bassist they are now freed to have two great guitars playing at the same time. They have a post-punk, sometimes Blur-esque, sound but are getting their own identity which is becoming stronger and stronger as their confidence builds. The songs are there, they play brilliantly and are a lot of fun. Some of the gaps for tuning between songs perhaps disrupted the flow a little and it was interesting to see that the way Gnoomes handled this was for the drummer, keyboardist or the other guitarist to carry a drone or beat while someone else tuned, making the songs almost blend into each other. It may have confused the audience about when to applaud sometimes but gave the set a more immersive continuity.