The previous evening I heard the tragically sad news of Robert Powell’s shocking and untimely passing and like the many other people who knew him I spent many hours in a state of shock and confusion and wondering if was a weird, bad dream or some ghastly misunderstanding but sadly not.  A great presence on the Norwich live music circuit Rob’s was a familiar face to just about anyone who has attended gigs with regularity over the past decade or so.  Often seen quietly and discretely moving from one vantage point to another to capture not just a shot of a band but to portray the whole picture.  We often chatted as our paths frequently crossed at innumerable gigs in the city over the years and he told me how he liked to tell a story of the gig so his photos would include not only the performers onstage but also the technicians, crew, audience, venue and details like the set times, plus some fun scenes backstage or in the outside smoking areas, capturing the atmosphere of the entire event and he had his own distinctive signature style. I thought of him as a “sniper-snapper” as he had a great knack for picking off a long-distance shot of someone in the crowd without them having the slightest inkling at the time and I’d always recognise one of his photos even before seeing the watermark.

Generous with his time and support he always remained positive and encouraging to others, happy to have a chat and catch up with everyone.  I last saw him just a few weeks ago at the Arts Centre when the Wolf Number were headlining. One of his favourite bands, whom he’d eagerly spoken to me about several times.  It had been a while since we last bumped into each other so we had a good catch-up between sets. He told me how happy he was in his job at Wex Photo and enthusiastically showed me the camera he had won there in the Christmas raffle and which he was using for the first time at a gig.  His passing is so sad and sudden and is a huge loss for the Norwich music community and an even greater loss to his close friends and family. A generous, supportive and honorable man of integrity. A true gent.  Known to many through his Facebook page Music Art Study, and as admin for the group Secret Norwich, his years volunteering at BBC Introducing in Norfolk and many other photography roles. My initial meeting with him was when I first started delving more seriously into gig photography quite a while back now. Rob was the first person to come up to me at a gig and have a chat about photography, cameras and of course music.  This has continued at so many gigs over quite a number of years and I shall miss bumping into him and our putting the world to rights and then balancing that with our enthusiastic shared love of music and photography. There was always a good chance of seeing him if one of his favourite bands were playing, of which there were many, such as Dr. Clyde, Solko, The Wolf Number, Mammal Hands, The Woodland Creatures, Feral Mouth, HANK, The Piratones, Killamonjambo, and a host of others.   Maybe when the time is right some sort of tribute gig with a projection of his photos might be a fitting send off  (uncannily, three of those – Dr. Clyde, HANK, The Wolf Number – are all on the same bill at Epic on 30 March). On Facebook itself it’s touching the way people are showing their respect and feeling of loss by changing their profile pictures to ones taken by him. It shows just how many of us he photographed over the years, he even snapped me! It also shows the closeness of the music community. Rest easy, Rob, and thanks for all the encouragement, kind words and friendship over the years. I hope you knew how much I respected you as not only a photographer but as a good, decent person with integrity too.

An excellent and fun photograph of Rob, taken a few years back by Ga Chun Yau. Thank you Ga.

So, having Rob on my mind most of the previous night and all of the day I was not feeling in the best of spirits to head out on a cold and damp February evening but as NAC was the last place I saw him it just felt right. Thinking about it now, the Arts Centre is a church, where we all gravitated when Bowie died, and only now do I realise the poignancy that I was here seeing a band called “InHeaven”! Plus of course there are not many more effective healers than music and the company of like-minded people, so where better than the NAC. I could certainly sense Rob’s presence here.  It was a good decision to come to the gig, which was also my first opportunity to view the excellent photography exhibition “Visible Girls” by Anita Corbin. 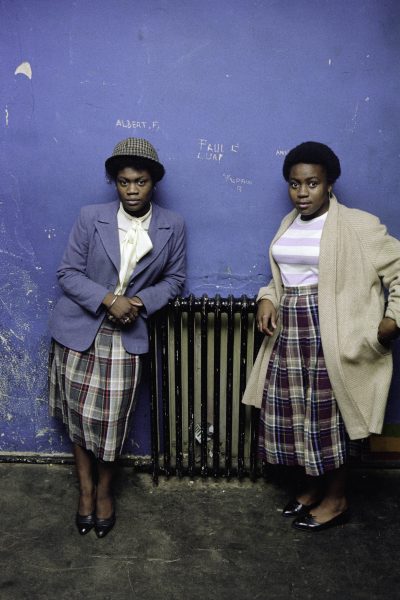 Opening this Pony Up night was the wonderful GRACELAND whom I felt I had not seen for a while.  I really enjoyed their set and with INHEAVEN’s backline of amps they sounded absolutely immense.  They dedicated a song to Rob and were otherwise in jocular mood, their mix of attitude and self-deprecating humour is just right but they sure can let the music do the talking too, they sounded phenomenally powerful and the set was a joy to experience.  They previewed a new instrumental (or one which “Just hasn’t got words yet”) which Rosie said after “We f—ed it up but you know what? We don’t give a shit!” with a beaming smile on her face.  I certainly didn’t notice what went wrong with it as it sounded amazing to my ears and got a great reception from the crowd. A very fine start to the evening’s music. 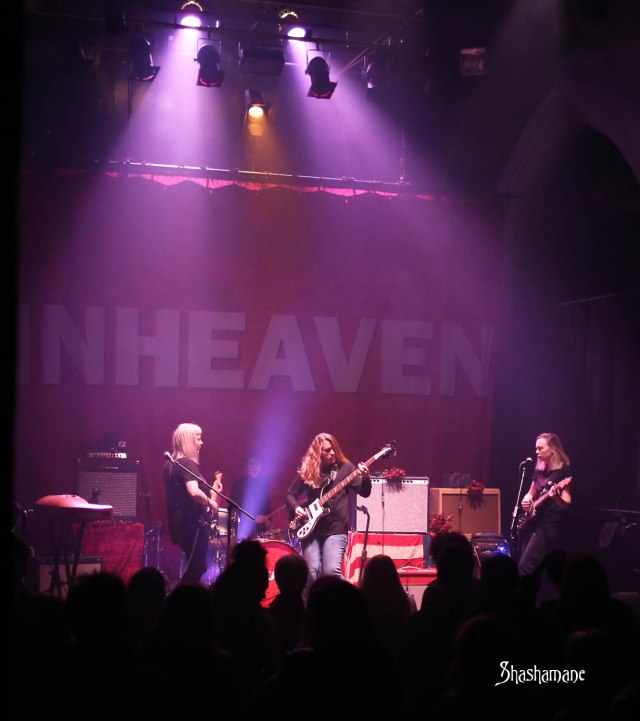 After a swift break it was the turn of Brighton’s Thyla to take the stage.  I immediately loved their sound, some of which took me right back to the sounds of the early 1980s and I certainly picked up on a Cocteau Twins influence in among that post-punk sound I love so much. Superb guitars, great bass and drums and a varied set that had me wanting to hear more. I liked Thyla and hope they will be back here soon. 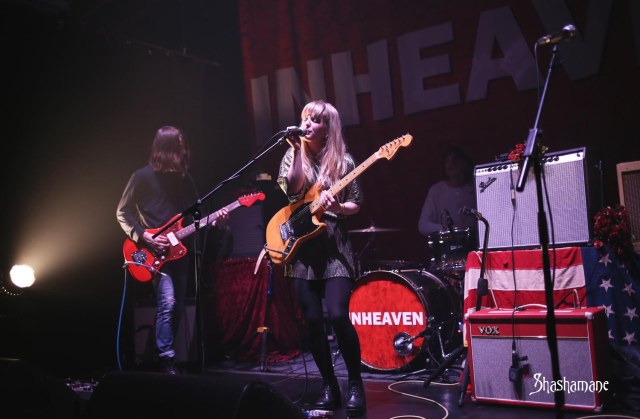 For some inexplicable reason this was my first time seeing INHEAVEN even though I was at the same venue at the same time they were playing some years ago for NS&V when Let’s Eat Grandma were headlining in the hall.  I can only guess that the music in the bar overlapped with that in the auditorium as I certainly saw Milly Hirst, Chris TT, and Matt Watson play sets there before I headed to the main hall for Let’s Eat Grandma.  Anyway, they are spoken of highly by all who have seen them. With a wall of backline amps their almost retro sound is certainly big and anthemic, with a crashing drum sound which isn’t altogether to my own taste but the whole sound was very much to the taste of those going wild at the front. I loved the bass and guitars as well as the passion, energy and enthusiasm they play with which transmitted gloriously to the mosh-pit, it did feel like watching a band on the cusp of big things, there were beaming smiles throughout the set both from the stage and those having a blast down the front. 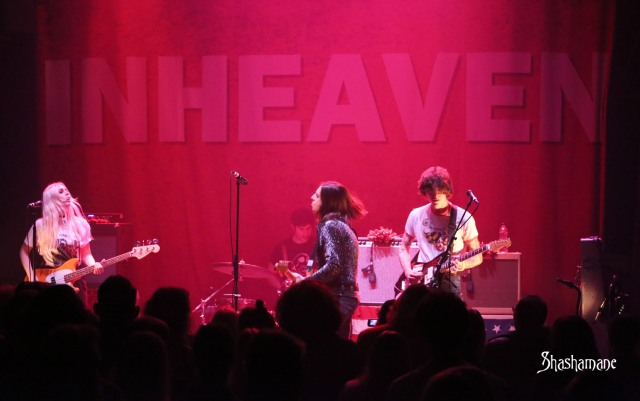 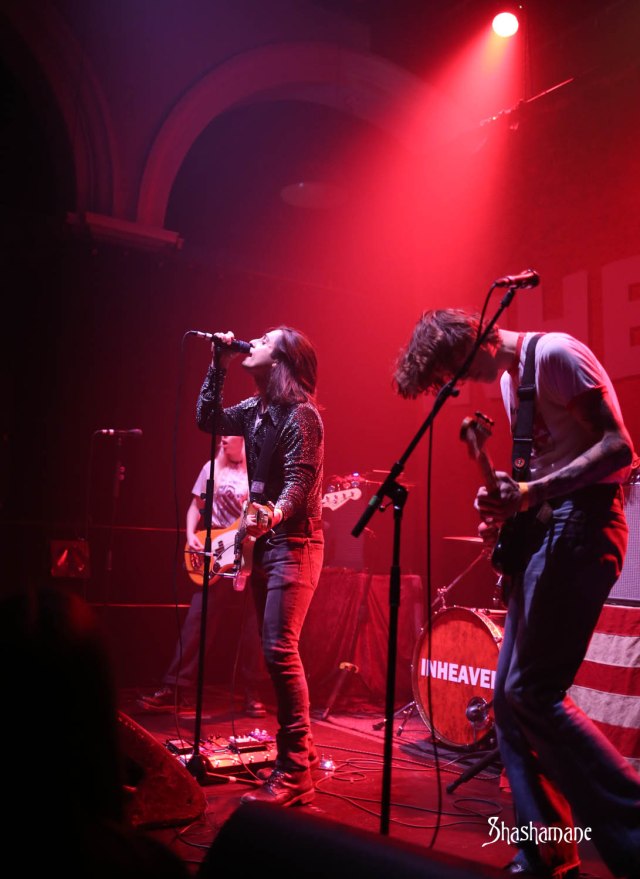 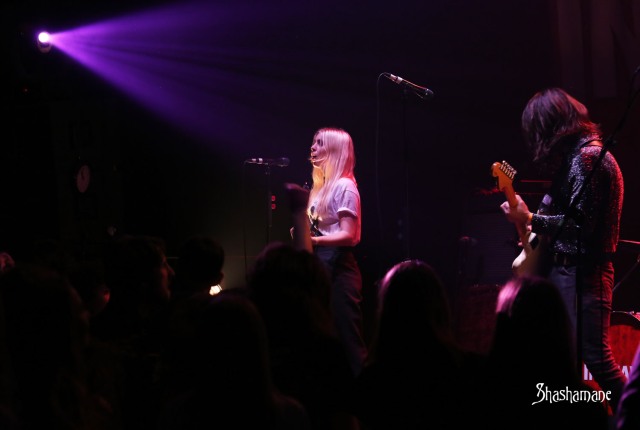 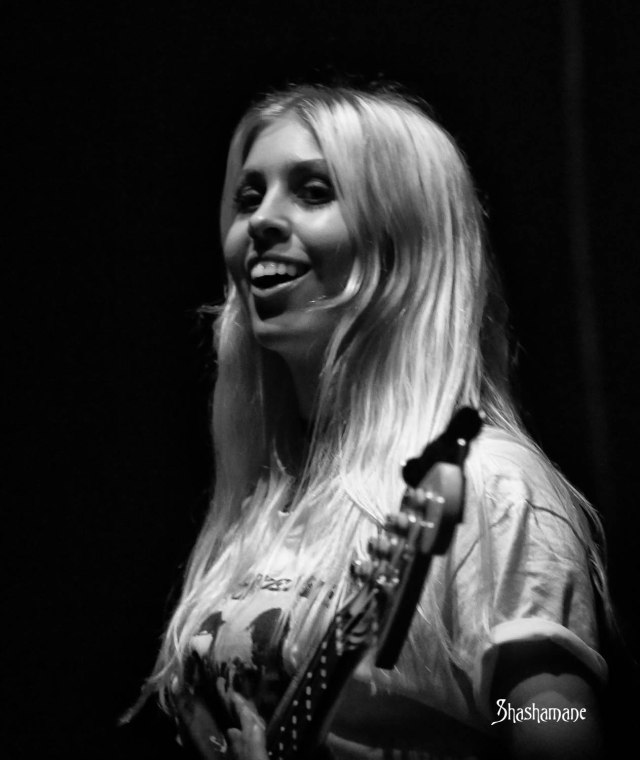 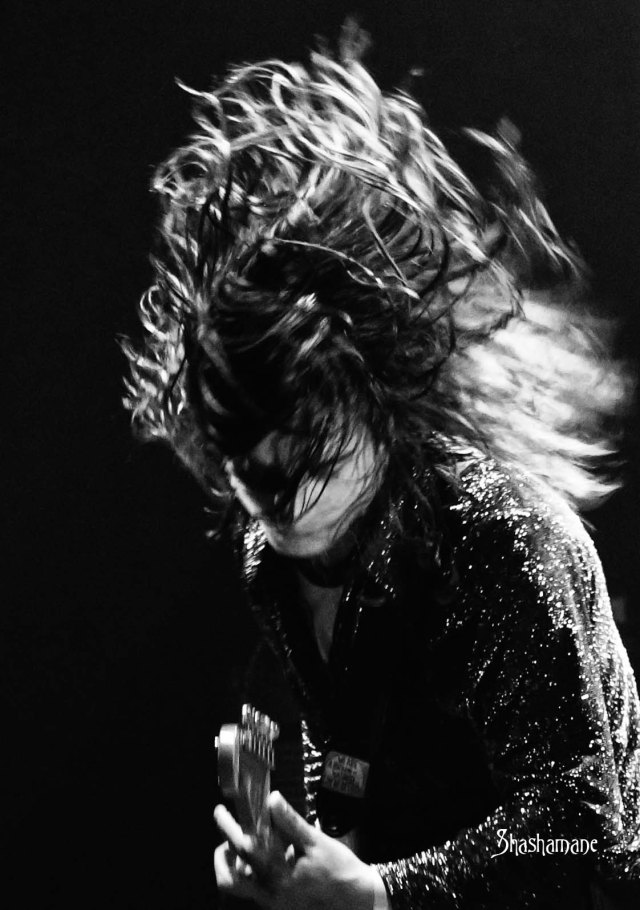 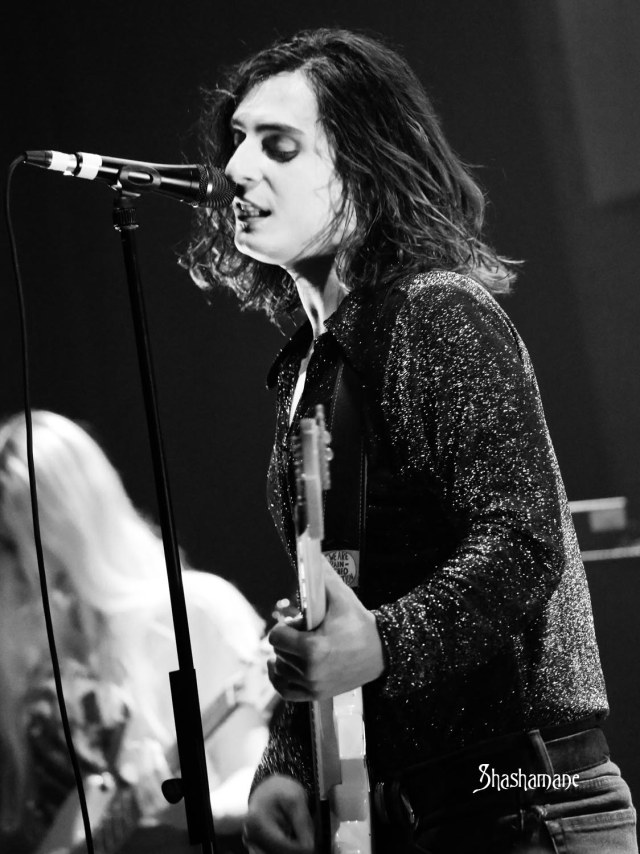 Their forty minute set ended about 11pm and with no encore; it was decent and enjoyable  but didn’t quite grab me enough to make me forget my aching knees – which seems to have become a barometer of how much I enjoy a set lately.  GRACELAND and Thyla however made me forget everything for a while and were my highlights from the night, they might not have had quite the same volume as Inheaven but they had good variety, songs and memorable sets.  Everyone on the night played with great spirit and I was glad I made the effort to be there as it’s good to lose oneself in music and also good to talk with fellow gig-goers and the lovely people at NAC about Rob.  Norwich has a fantastic music community but this is a big and sad loss. Rob will be remembered for being a thoroughly decent chap and the wealth of wonderful photographs of a vast number of musicians and fans over many years. RIP Sir!

INHEAVEN want to be the kind of band you’d have patched onto your bag at school. The kind of band that changes your life when you’re a young teenager growing up – in whose music and ethos you want to invest beyond just adding a few tracks to your Spotify playlist. The kind of band they felt the music world was lacking when they decided to form a few years ago.

After meeting bassist Chloe Little at “a really crap gig” and bonding over their shared taste in music, the pair embarked on an audio-visual project, recruiting their neighbour Jake Lucas on lead guitar and Joe Lazarus on drums. To test out their creative compatibility, Little put together a 30 second video of images and asked Taylor to write music over it. Things clicked into place pretty fast. “It was kind of like, ‘Something needs to change , we really need to take control of our lives and change things’ and I think you can hear that in the first recordings we did.”

There’s shades of Slowdive and My Bloody Valentine on the nostalgic, cinematic Regeneration – the first song Taylor wrote – though there’s a little more melody and a little more bite than the ‘90s shoegazers. Naming themselves after the infamous lady in the radiator scene from David Lynch’s Eraserhead, INHEAVEN wasted no time getting the word out – though in their own, unique way. They set up a mysterious website with hidden videos, made fanzines (band mood boards, which they still regularly produce), produced their own artwork on Microsoft Word, and sent their songs to blogs around the world. “I’m cringing remembering emailing all these people,” says Little, “because I didn’t know any of them, I just found out who they were and sent this email with big, bold capital letters and the videos. 50% obviously went straight in the junk – hopefully they’re kicking themselves now! But surprisingly, loads of people picked up on it.”

One of those people was The Strokes’ Julian Casablancas. “Rory Atwell, who mixed our first EP, forwarded me this email from Cult Records,” says Taylor, “and it said, ‘Us and Julian are loving these songs. Who are they? Where can we get a hold of them?” After a handful of correspondences, Casablancas’ label released INHEAVEN’s first single in America, and “from that point on it started rolling out of control.”

In a good way, that is. Now, after gaining support from NME, Q, The Independent and DIY, accumulating several hundred thousand YouTube views and Spotify streams, and – more importantly – accruing a loyal cult following, the band are opening for Circa Waves on tour. 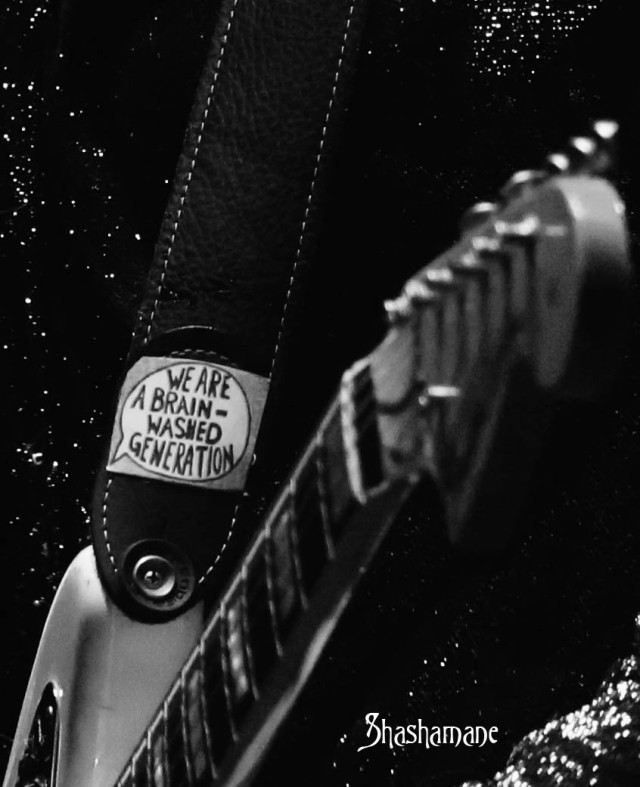 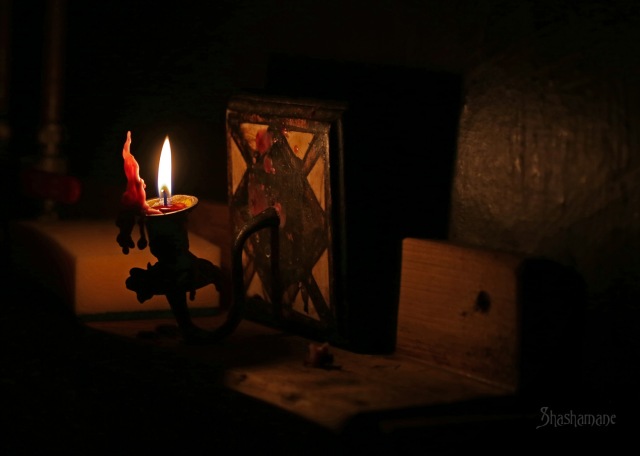 www.norwichblog.com www.shashamane.etsy.com www.facebook.com/ShashamaneArtPhotography www.facebook.com/NorwichLiveMusicPhotos you can find my prints for sale on Etsy at http://www.etsy.com/shop/shashamane?ref=si_shop and at Artfire: http://www.artfire.com/users/shashamane and www.facebook.com/ShashamaneArtPhotography
View all posts by shashamane →
This entry was posted in graceland, live music and dance, Norwich Arts Centre, pony up and tagged graceland, inheaven, Music Art Study, norwich arts centre, norwich music city uk, pony up, Robert Powell, thyla. Bookmark the permalink.