NAC’s artist in residence had his latest exhibition of paintings The Doors of Perception launched with a private view ahead of a gig featuring his band (sharing the name with one of the paintings) The Vicars of Stiffkey.  Sadly, due to flu, Blisster could not feature on the billing but their place was filled by MARLA (featuring Off With Their Records’ Ryan on bass), as well as Painted Heathers, who have now expanded to a four-piece and impressed me with what I think was the best gig I have yet seen by them. 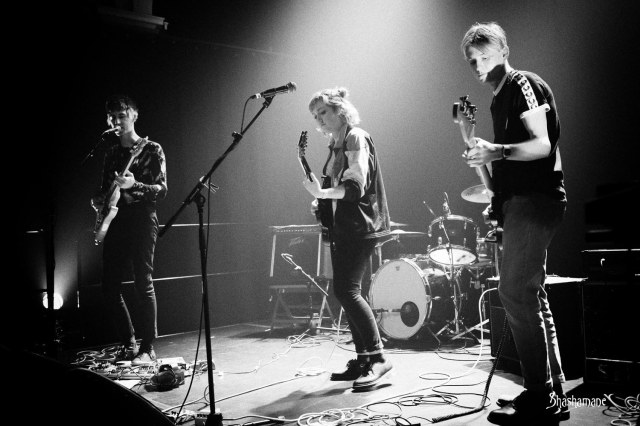 There isn’t another local act remotely like The Vicars and there was a good vibe on the floor during the set as these five motley characters played songs old and new in various pieces of headwear. It’s always fun and interesting and I loved the dancing to Shit Disco.

The Vicars of Stiffkey 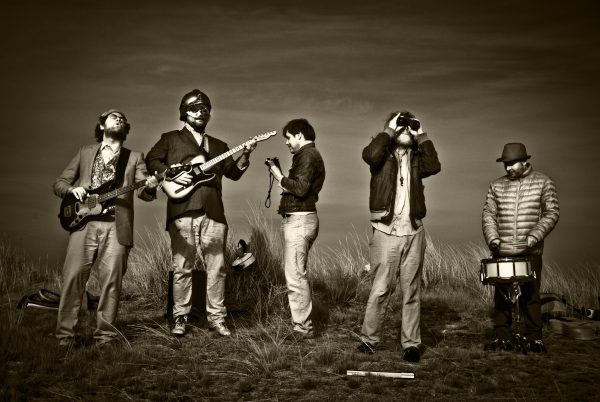 The Vicars of Stiffkey are drawn from the end of the trainline. They make psych-rock grooves. The band is fronted by artist/impresario Will Teather, with other Vicars including legends from the alternative music scene in the East of England: Tom Conway, Shane O’Linski, Dave Inge and Dominic Redsell. Always shambolic, always enjoyed.

Fuzzy guitar pop from the Norwich based four-piece, also signed to Off With Their Records.

MARLA are an alternative garage rock band from Norwich. Having just recorded a string of singles at Abbey Road Studios and recently signed to Off with their Records, 2018 looks set to be their breakthrough year and the perfect time to catch their electrifying live performance. 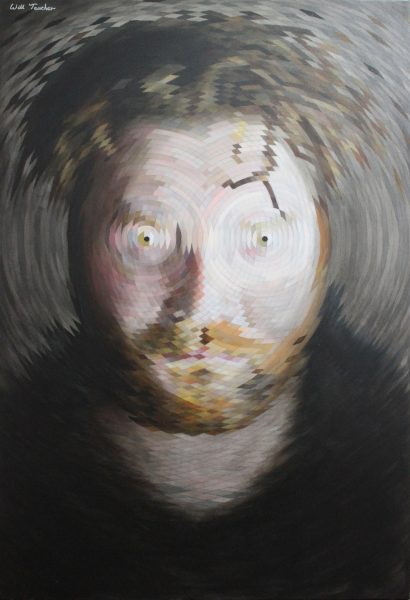 Will Teather: The Doors of Perception

Norwich Arts Centre Artist-in-Residence, Will Teather, displays a wide range of his recent works at the venue as he continues to experiment and explore new journeys within the medium of painting.

The show includes recent works that see the artist exploring abstraction for the first time.  New compositions reinterpret principles of sacred geometry within visual art, creating complex patterns based upon the underlying structure of representational images, revealing perhaps a divine form within the natural world. The artist explains:

“These intricate lattices reference both postmodern pixilation within painting, as influenced by digital culture, and the longstanding idea of an underlying order within both visual art and our wider perception of reality.   They are also informed by the obsessive exploration of geometric patterns by the outsider painter Eugene Andolsek and the automated techniques of Sol Lewitt, who would pass instructions onto assistants who then created his drawings.”

On display will also be a new spherical painting – each one of these is the result of months of work.  The most recent development has been a 360 panorama of a flock of birds painted on the outside of a sphere that is designed to spin forwards creating a sense of motion and flight. The use of movement in these works and the unusual curved format of the canvas, combined with the shifting perspective, play with the fundamentals of what makes a realist painting.

The artist’s appetite for new adventures continues as he has also explored ways of creating hybrid images of several painting genres.  This includes expressively painted portraits, where the sitter’s head opens into a detailed silhouette that reveals their subconscious thoughts.  These novel portraits are an antidote to the hyper-real painting practice Teather is known for as a portraitist, as revealed in a small portrait of his daughter also on display.

Further works see us on more familiar territory with the artist, as he explores themes of escape from modern life, with pastel drawings of flying office workers.  These paintings continue the sense of spectacle and possess a theatrical quality, like they might be from a forgotten play, creating a blurring between the real and the imagined.  The artist has long been interested in magical-realism and the inherent artifice of realist painting.

The title of the show comes from Aldous Huxley’s 1954 essay that explored a variety of concepts, including the idea that the brain eliminates unessential information from the totality of the “mind at large.” Teather perhaps is trying to reveal those things that may otherwise go unnoticed as we filter our everyday life.

Will Teather’s work has been exhibited internationally to acclaim, with recent exhibitions including as a guest artist for Artrooms London, Artwars at Red Dot Miami and as a finalist in the London Contemporary Art Prize. His work has been collected widely and in 2015 broke the sales record for the Other Art Fair, one of London’s leading events for upcoming talent. His studio is based in Norwich, where he is an Associate Lecturer in drawing at Norwich University of the Arts. He is the Artist-in-Residence for Norwich Arts Centre, following on from previous residencies with venues in New York and Aberdeen.

Also a musician, Teather has fronted a succession of bands over the last ten years, the latest been the Vicars of Stiffkey: a psych-rock band that recently signed to Off With Their Records with their first release, Live & Uncassocked released in June 2017. The band will stage a performance at Norwich Art Centre during the exhibition’s run this January.

This exhibition is supported by Norfolk County Council and Art Council England.