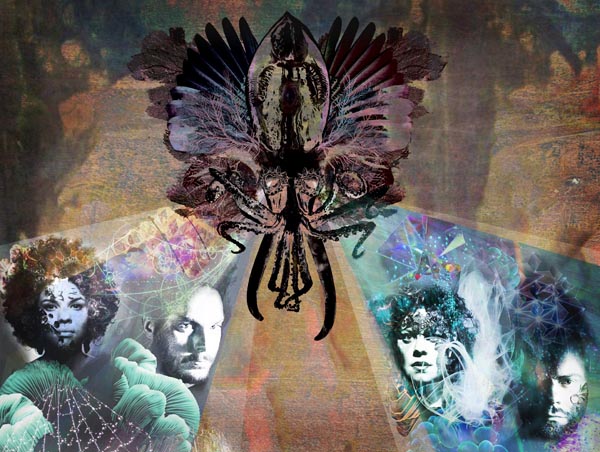 Raevennan Husbandes joined the line up of Moulettes a couple of years ago and it feels like ages since I saw this wonderful person with a most beautiful spirit so I was looking forward to seeing her again.  Albeit just a three-song fifteen minute opening solo set it was a rare and lovely treat to hear her again. Such a pure voice, faultless playing and a simply delightful presence. More please!  I’m not quite sure when that will be though as on this penultimate date of the Moulettes tour and on the back of 20 straight gigs without a break, she and the band were looking forward to a well-earned day off after this date.  I guess that would be 40 gigs in twenty days for Raevennan but hopefully we’ll see some more solo shows from her during this break, I really like Raevennan (even her hot air balloons shirt is charming), her songs, playing, voice, and her special energy and positivity and she had a great homecoming Norwich welcome. 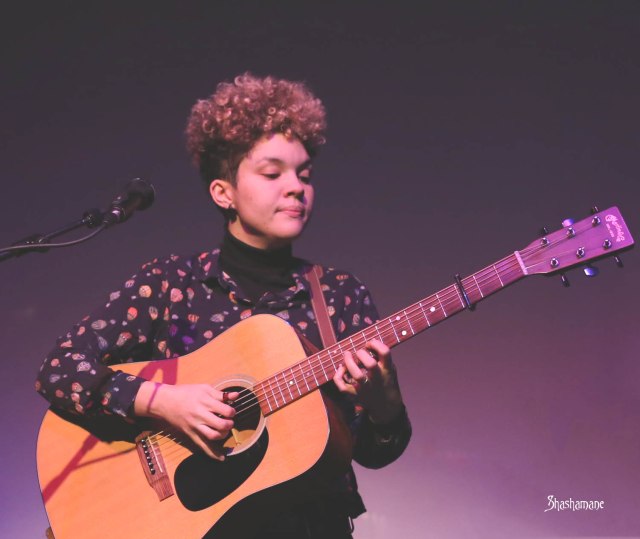 The other support slot was initially due to be filled by Bessie Turner from Suffolk, who I was also looking forward to seeing but she had to cancel when the call came to perform a live session for Jo Whiley on Radio 2 the same night.  Her place was taken by a name unfamiliar to me. Red Dear.  Displaying no signs of nerves whatsoever, this duo turned out to be Dylan, 16, and his sister Izzie who apparently has only recently turned 15!  Obviously old souls with bucketloads of talent they are the latest to come through from the legendary Annie Catwoman’s Sonic Youths showcase at Norwich Arts Centre.  Both playing guitar, Dylan occasionally using bow and Izzie also playing flute and an autoharp their set was predominantly originals though they did cover Jonathan Wilson’s Ballad of the Pines, quite beautifully.  An artist they said they saw in the same venue in 2012 … when they’d have been 10 and 11, presumably.  They had an EP of demos available which featured full band versions of the songs, multi-instrumentalists, everything is played by the two of them. Where does it all come from?!  Incredible talent and hugely impressive. Definitely ones to watch. 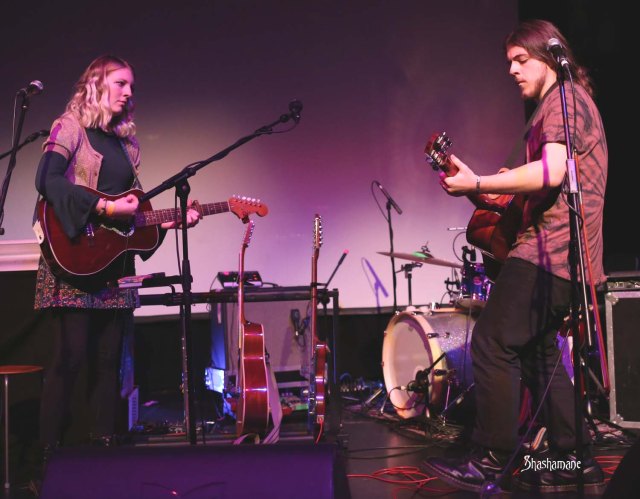 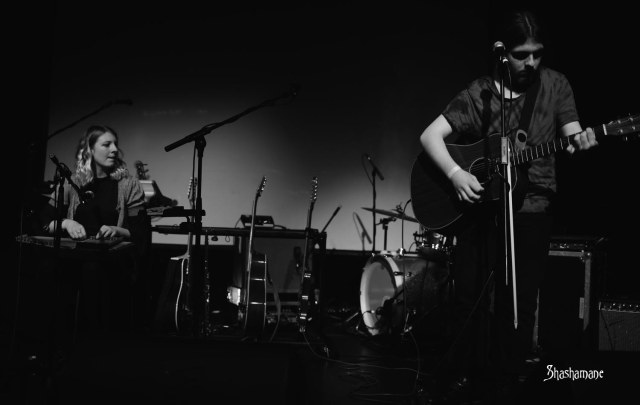 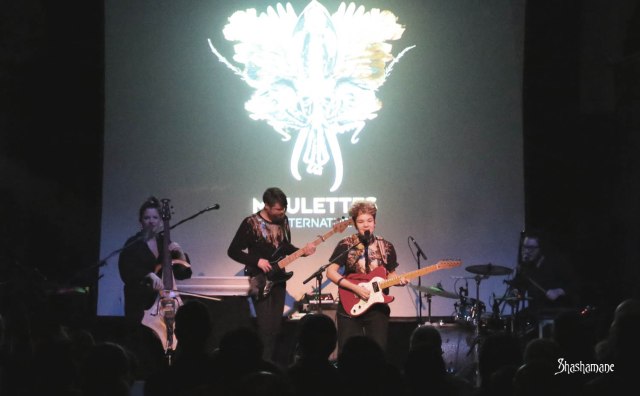 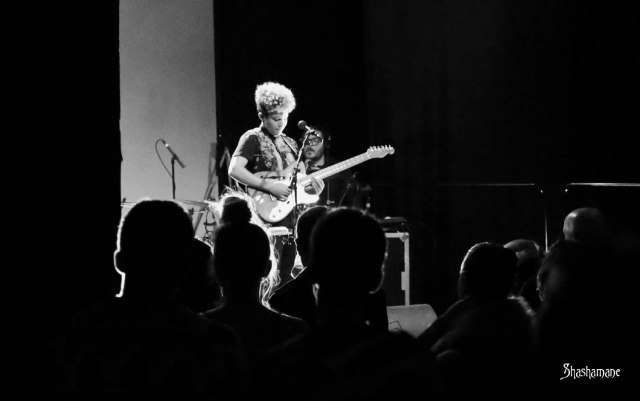 Moulettes are a band I’d not seen before though I had heard their recent album Prenatural and the NAC certainly delivered that huge sound of the recordings.  Bass and drums rivalling that of a dub act, the NAC was pulsating with the low bass. There’s much more to their sound than volume though and features electric cello and of course Raevennan on electric guitar and sharing the vocals, she had a great chemistry with Hannah and a good energy.  A band like no other but with elements of folk, prog and rock, there were soft moments too like on the beautiful Songbird, and some interesting intros to the songs (“This one’s about the Japanese Puffer Fish, who spends a week constructing perfect symmetrical shapes in sand to woo a mate”).  The whole set was eclectic, very powerful and quite unusual.  They are taking a whole year off from touring so this was the last chance to see them in Norwich for a while but it was another well-attended gig at NAC which was practically full once again.  Next up here, two nights of Midwinter Moonshine. 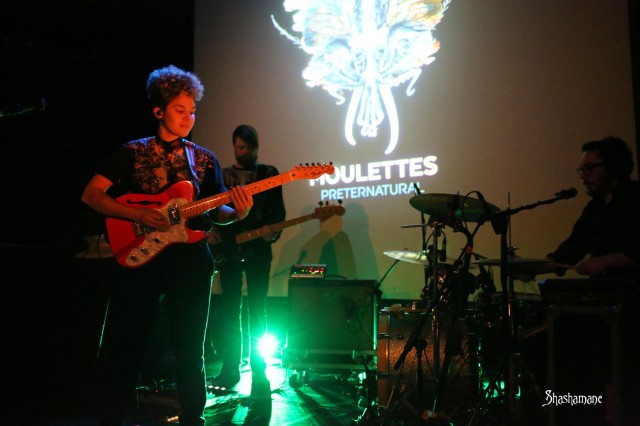 “Huge, complex and compelling. One of the most thrillingly nimble musical ensembles the UK has produced in decades.” – Prog Magazine

“Redefines the term ‘Progressive’ for a new era”– Fatea Magazine

– MOJO
“A compelling and original band”

In early 2015, lead singer and songwriter Hannah Miller read a New Scientist article that described how the discovery of a microscopic creature had redefined the perimeters of life as we know it. The ‘Halicephalobus Mephisto’ Nematode Worm has none of the requirements of other known life forms – able to survive deep underground, without oxygen or sunlight.  The seed was sown for ‘Preternatural’ – an eclectic 11-track opus for the Natural World, and the strange and beautiful creatures in it.

“It made me contemplate how much we still don’t know about the planet we live on, and to consider that moving space between what we do know, and what we can never know; at the frontier of science and discovery.” says Miller. “The animal kingdom holds such a wealth of beauty, creativity, humour, ingenuity and artistry. I wanted to celebrate it, to underline its fragility, to hold up a mirror and compare our own species to others.”

The band, like the creatures they describe, have always been an evolving phenomenon, and each album has seen a significant leap into new unchartered territory, their unusual music vision prompting comparisons as disparate as …the Kronos quartet, Roxy Music, Frank Zappa, Kate Bush…echoes of early Pink Floyd, Bowie and Radiohead.. Kraftwerk and Björk (R2 Magazine/ Reuters.)

“We identify with bands who present their own kind of eclecticism,” says Oliver Austin. “From Zappa, and Gentle Giant to current bands like Field Music, John Grant, Snarky Puppy, Laura Mvula, My Brightest Diamond, tUnE-yArDs and Tortoise; these were all references for the record.”

It is a beautifully orchestrated ecosystem, experimental in parts but still accessible, fusing rich vocal harmonies, persuasive melodies, big riffs, detailed arrangements and sharp songcraft to make a genre-defying album, which explores the moving space between electronic and acoustic; DIY and big production.

The arrival of newest member Raevennan Husbandes catalysed a rockier mood, her stark and fluid electric guitar playing complementing Miller’s virtuosic cello to forge a muscular, unique sound-blend. Husbandes’ & Miller’s luminous voices deliver characteristic multi-layered harmonies locked in with a towering, thunderous rhythm section (Mortimore / Austin), the band’s synergy and tightness is a testament to their relentless touring schedule; their musical range described by Prog Magazine as “huge, complex and compelling. One of the most thrillingly nimble musical ensembles the UK has produced in decades.

Incurably ambitious, this is a band that has always put an adventurous approach to Art at the heart of their craft. The front cover best demonstrates Moulettes for what it is: an eclectic, progressive hybrid, a bizarre and bombastic monster.

December 2017 is the concluding chapter of the two-year ‘Preternatural’ tour, and the last chance to see the breathtaking live show that has taken the band across Europe from Poland to Malta, and across Canada from Nova Scotia to Victoria Island. 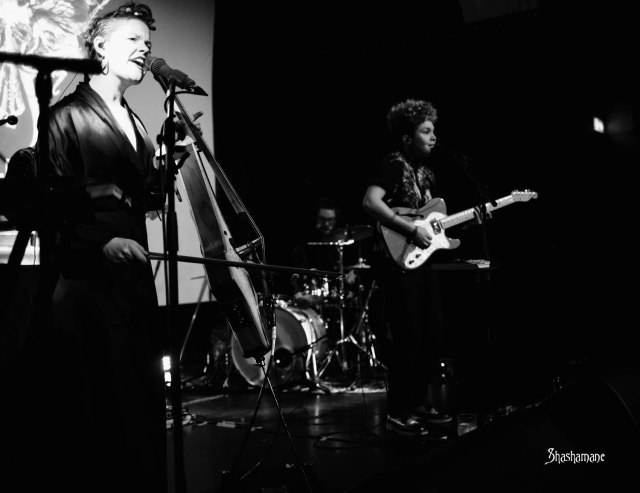 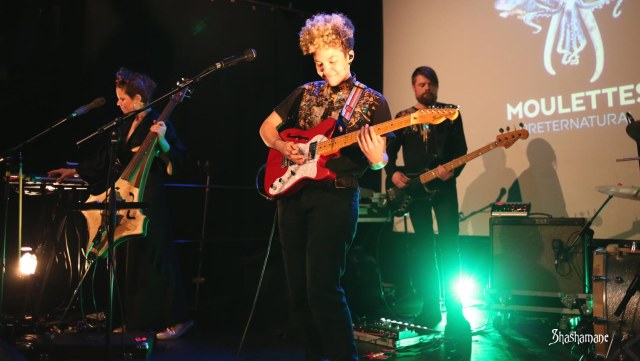 Many thanks to Raevennan Husbandes, NAC, and Annie Catwoman.  Next Sonic Youths is at NAC Bar on Saturday 13 January. 1-4pm.