No photo pass for me this time but I was nevertheless keen enough to catch Mark Lanegen in Norwich to just go along and enjoy the gig without a camera.  The thing is though, within minutes of the first support set, from Joe Cardamone  (of Tenebrous Liar), I was seriously wishing I could be photographing!   Initially a short, and somewhat unsettling film with score, once he came onto the front of stage to sing in front of his projections it became a sonic attack of noise and sensory overstimulation with flashing images and strong silhouettes.  I don’t say this unkindly as it was powerful stuff and he has the sort of profile that makes for extraordinarily strong silhouettes and shadows (that I wished I was photographing!). Coming on looking like a Man Who Fell to Earth-era Bowie and sounding somewhere between Fad Gadget and Pete Murphy it was all quite compelling, if not necessarily something I could imagine listening to at home.  It was a brutal assault on the senses which had me worrying for my hearing, headaches and nightmares. Again, not necessarily a criticism.  It was an assault on the senses and during the set there were a couple of unpleasant shouts, which I genuinely did not know whether it came from the PA or a loud animated conversation nearby. That is how disorienting it all was.

His image is strong and he makes lighting a cigarette indoors seem like an act of subversion, defiance and provocation but I guess it is simply part of the show … while the image of a cross is almost an ever-present during the visuals, by far the most powerful moment for me, however, was his singing “I am the last man standing” in front of a projection of drone RT footage of an apocalyptic-looking and destroyed Aleppo in Syria. 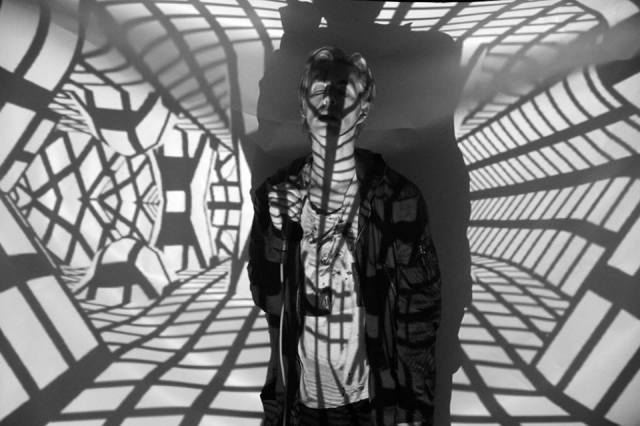 Next on was Duke Garwood, who in my opinion was the unfortunate victim of some poor sound.  Maybe it was where I was standing but I still got enough of a feel of his works to be impressed with the songs and what he is doing. I’d really like to hear him how he is supposed to be heard though.  There was a real cinematic quality to it and some lovely sparseness.

I’m not nearly as familiar with Mark Lanegan’s catalogue as I should be, becoming a fan relatively late and playing catch up but I absolutely love everything I do know and am particularly fond of his Blues Funeral era Cave-esque work, and he most certainly did not disappoint. Sounding every bit as whiskey soaked, gravel-voiced and dark as I expected and backed by a powerful band, thankfully the sound was pretty much spot on again for the headline set.  I suddenly realised when he came onstage that the Waterfront was packed, as was fitting. It was a compelling set and Lanegan’s voice is simply one of the best and most distinctive in music. Again, some of the songs felt so cinematic too.

They all looked quite moved as they went off after their encore and about ninety minutes in total with an appreciative crowd and good atmosphere.  It was a great set and quite unforgettable.  Not a set about being showy or gimmicky, it was just all about the music. Bloody great music.  I expected it to be good and got something even better. As the lights go up we’re thanked again from the stage and told to congregate at the merch table where Mark will be in about quarter of an hour to chat, sign, or just shake hands. It is highly tempting but I’d only probably end up spending yet more money I can ill-afford on vinyl but, but, but … there are tour-only vinyl recordings up for grabs!  I just about manage to to resist and step out into the cold, dark, damp air, pull my collar up and head home reflecting on another great gig. Somehow this weather just feels right tonight.

November has seen an extraordinary run of incredible gigs, to which this one is added to Starcrawler, Daddy Long Legs, The Tubes, Mammal Hands, Mammut, The Magic Band, Sleaford Mods, Katie Spencer etc.