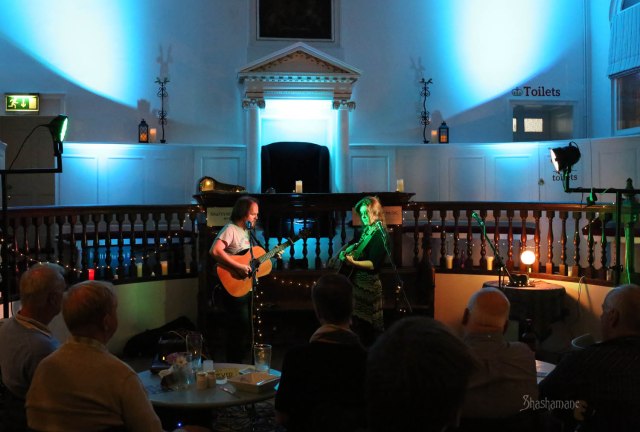 After a quiet September Grapevine is back with a bang for the autumn season with no less than four music events at The Guildhall in October alone.  The first of those featured that magical lady, Yve Mary B, with local guitar legend Mark “Boweevil” Howes and a couple of surprise guests, plus headliner John Craigie, a Californian folk singer now based in Portland who was spoken of in the highest terms possible by Rainbow Girls on their recent visit to the UK, American friends and a few others “in the know” about this special talent.

Although the leaves are falling and the nights are rapidly drawing in, for the time being it remains incredibly mild in Norwich, consequently an already pretty full Guildhall was baking hot by the time I arrived.  I’m never quite sure where to place myself here but being so occupied I opted to lean against the pillar which although giving a good view of the performers does mean from a camera point of view, the dreaded “toilets” signs will be visible on photos and video. Not to worry, it is all about the music! 🙂

Just the two acts on the bill meant both acts could do a deeper set and it was a delight to hear Yve and Mark playing together, a good musical chemistry between them and although Yve unusually was playing to a setlist it was still fluid and organic which meant Mark had to focus on her playing as well as his own and that’s when the magic happens. Both of them playing beautiful guitar and of course Yve’s gorgeous vocals.  The set included Island Song and a few from her High on a Moutain album before Mark put his guitar down and he was replaced by a couple of guests for a Bee Gees cover of To Love Somebody, Lucinda Fudge and Clare Hayes who harmonised acapella beautifully on some Southern gospel and Didn’t Leave Nobody but the Baby (Go to Sleep You Little Baby), by Gillian Welch, Emmylou Harris and Alison Krauss which is featured in the classic O Brother Where Art Thou?  I hope we see this format again, they were great. As yet without a name, with this branching out I’ll call them Tree Oh for now.

I had a chance for the briefest of chats with John Craigie ahead of his set, and he seemed really impressed by Yve’s songs.  I’ve heard so much about John, not least from Rainbow Girls who covered his song 28 at The Smokehouse in Ipswich recently.  I think they may even have joined him to perform it in Nottingham too.  They are big fans and I can see why.  Unassuming, witty and with a delightful way with words, not just in his songwriting but in his stage manner between songs too.  Self-deprecating, he mocked his own bio’s description – “When Craigie plays, it’s one of those special shows that can make you laugh and cry in the same song” – but it is an accurate quote.  He joked that his ideal audience for the music would be ” … a load of people who’d just been dumped. In a dark room”.  He has an ability to articulate his feelings, thoughts and experiences, many of which we can easily relate to and that’s when we find he is expressing our own feelings too.

John Craigie unwittingly channeling hundreds of years of Guildhall courtroom history. All that was missing was the bible, though there was a song about that!

He told of how he wrote a couple of songs under pressure such as the wonderful Woodstock Baby, and the aftermath of the Trump election (“Cheer us up with a few of your songs that can make us laugh and cry”) literally days after the event.  Plenty of positivity, for music and togetherness at least, in the gallows humour.   Michael Collins turned out not to be an Irish rebel song but was in fact about the forgotten astronaut and colleague of Neil Armstrong and Buzz Aldrin (“… named after Buzz Lightyear”) who whilst those two were setting foot on the moon and larking about he piloted the floating module for a lonely 22 hours.   But it’s the stories between the songs which are as charming as the songs themselves; “So, Mr. Aldrin sir, what did it feel like finally setting foot on … the set of The Simpsons?”  Brilliant!  Think an American Will Varley or Chad Mason … the set has the same balance of appreciation of the music and laughter between the songs and sometimes within them.  I don’t think many others could play an entire set with closed eyes and yet get the audience to sing along with a chorus of a song they didn’t know about not looking at photos on a cell phone, all done at the command of his eyes opening. It was an absolute treat … I was just kicking myself for not getting to speak to him beforehand about Rough Johns and particularly the song 28, but then when the crowd noisily demanded an encore there it was.

Although a Portland resident it was California that was most frequently mentioned, and it’s a place that has been on my mind too.  We have a number of mutual friends there and some of them are perilously close to the devastating wildfires that have been eating chunks of the state.  Some friends were housing their own dear ones who’d lost their homes only to have the fire head that way too, being too afraid to sleep and on standby for their own evacuation which of course in some cases has now happened. It’s almost unimaginable.  I am thinking of them.

Huge thanks to John Craigie, James of Blue House Music – a man of impeccable musical taste and a true gent – Yve, Mark, Lucinda and Clare, Dickie on sound and of course Steve and Jan of Grapevine.  There seemed to be something of a ‘fairy light malfunction’ while Steve was introducing Mr. Craigie but Steve handled it with a “Well if you will put me in charge of light entertainment!”  🙂  Probably my fault for saying “You can’t have too many candles and fairy lights” to him earlier. The atmospheric Guildhall seemed rammed and it was good to have a full crowd for such a wonderful talent on his first UK tour in one of my favourite Grapevine nights.  All the more impressive bearing in mind the numerous gig clashes in Norwich, not least the sold out opening Norwich Sound & Vision Festival night at the Arts Centre. John Craigie is a talented artist, raconteur, troubadour and another absolute gentleman. It was an privilege to have him play in the city, thanks to all who made it happen.

Next Grapevine is on Saturday featuring Hannah Sanders and Ben Savage, then there is an OXJAM opening night on the 20th, followed by a Tin Heart Troubadours album launch on the 27th.

The previous week I headed to the Flamingo (aka The Pig & Whistle) for a hastily relocated gig featuring The Lovin’ Handful. A fundraiser for The Carwash which is where it was supposed to be held.  A new project after the closure of Old School Studios, this new studio/rehearsal space on Ber Street is a new project by Mr. Jason and shall be opening soon.  Upstairs at The Flamingo it was hot and absolutely rammed with a just superb atmosphere, which is fortunate as the gig was being recorded for The Lovin’ Handful’s live album. I cannot wait to hear it!  This band are a LOT of fun and have quite a following. 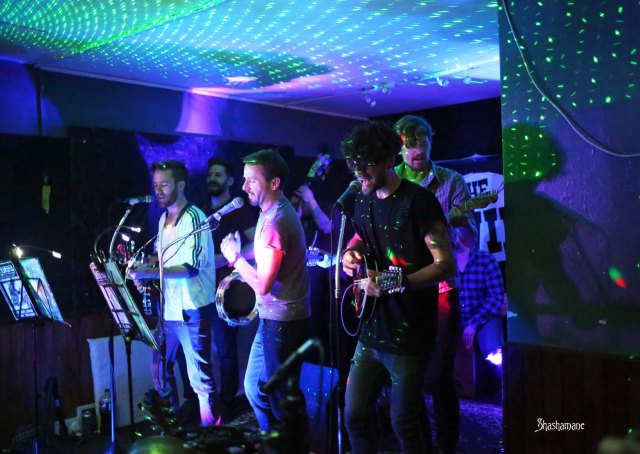