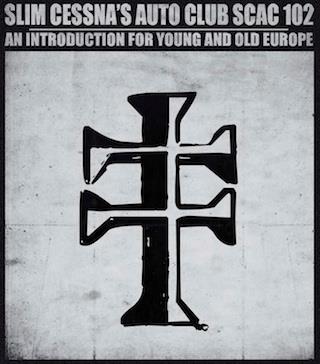 Slim Cessna’s Auto Club are a band who had gone totally under my radar until earlier this summer, and judging by the sparse attendance the gig also missed the attention of many others too.

There happened to be a gig in the main room on the same night; The Jesus and Mary Chain with support from Brix and the Extricated, and outside the venue there was a very different atmosphere from the previous night’s excitment and massive queue ahead of the Sparks gig, with a handful of people arriving early to await entry to two distinctly different gigs under the same roof. 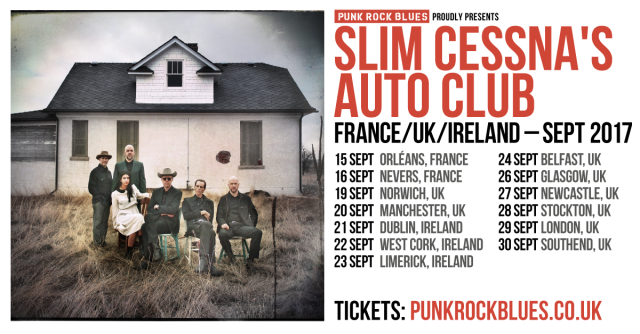 I wish this had been held at The Crypt, the Waterfront can be a dour, soulless venue with sometimes surly security but once you negotiate the lottery of their “attitude” from one or two the gigs are usually cracking and the atmosphere can be great.  In a weird way I guess their security’s belligerence, although dampening my post-Sparks euphoria did put me into that “outsider” mindset that meant I fitted in perfectly with the rest of the SCAC audience.  Upstairs in the studio something incredible was about to happen.  After an opening solo support slot from local punk legend Dan Allen of Ducking Punches the mysterious Slim Cessna’s Auto Club took to the stage and the small crowd of 50 or so edged closer, an exclusive club of those “in the know” who’d seen the band before and a few others, like myself, whose curiosity had been piqued.  They featured pedal steel, upright bass, double-neck guitar, drums, two banjos and two singers.  The double-necked guitar featured a scratchplate with a hologram of the Virgin Mary and Jesus!!  Downstairs had the Jesus and Mary Chain and upstairs had the Jesus and Mary scratchplate. I think that’s probably the kind of messed-up synchronicity that follows a band like this. Obviously the rest of the night was wonderfully dark and strange entertainment, as visual as it was musical.  Somehow the size of the crowd only seemed to make it feel more special as the band still gave it everything and there was a sort of celebration of oddness, outsiders gathered together in a special group, and it did indeed suit the venue.  In some weird way there just being a select few made it more special and darkly celebratory. Slim Cessna’s Auto Club are only playing a handful of UK dates … there were around fifty very lucky people here who saw their Norwich show.

I’m not sure if Norwich will deserve a return visit after we failed to fill the Studio but if they do come back don’t make the same mistake of missing out again … everyone there will almost definitely come back for more.  I hope Slim Cessna’s Auto Club won’t hold it against us, it’s just unfortunate that even on a Tuesday night this still clashed with at least two other major gigs in the city (JAMC, plus The Rails at NAC), and came the day after the sellout Sparks gig.

You can read my fuller review of the gig on the Outline pages.

Post-gig walk back through the city.

Many thanks to Outline Magazine.