Day One of Rainbow Girls UK Tour 2017.  I seriously don’t know how they do it but I’m damn glad they do.  Less than twenty-four hours after taking off from San Francisco, fifty-two hours without sleep, a customs guitar panic moment at Gatwick, hiring a rental van, driving straight to Norwich and even then enduring a 45 minute search for the Bicycle Shop’s Eaton Park Cafe (“We even saw a man on a bicyle and thought surely he’d know where the Bicycle Shop was … “), but once in and soundchecked they played and charmed and wowed us as they always do. Post-storm England was looking typically wet and autumnal but that may even have been a welcome sight to them after parched California, though the sun did appear in Norwich at about the time they did. Rainbows were even spotted in the sky, to announce their arrival. 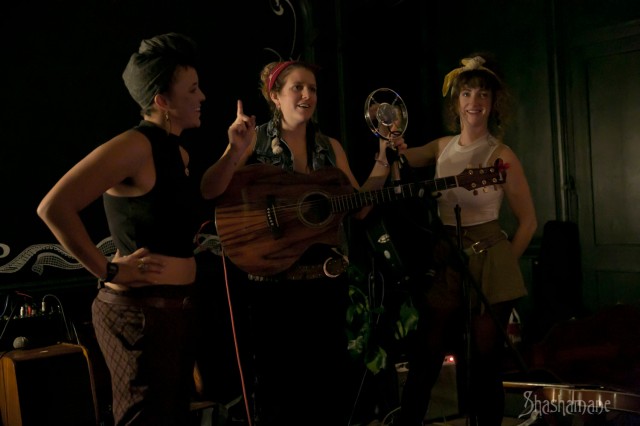 Old souls with youthful spirit and energy. It’s two years since their last UK tour and they have been much-missed here but very busy in their home country, touring, writing and recording.  There’s lots to talk and write about in America at the moment, some of it we are well aware of and some of it less so, which makes these songwriting statements all the more important and relevant.   It’s a three-piece Rainbow Girls tour this year, without Savannah’s drums and percussion but this pared-back sound means travel is lighter, and more importantly, the subtle format and sound is even more effective at getting the message of the songs across.  Not that the sometimes weighty subject matter covered lowered the mood, it just raised awareness and this was a vibrant and positive gig with lots of laughter and participation too.  These are talented musicians, artists and poets and they need to express themselves and get their message across. They succeed in doing this gloriously and always strike the right tone, the set is always melodic and subtle and multi-layered. 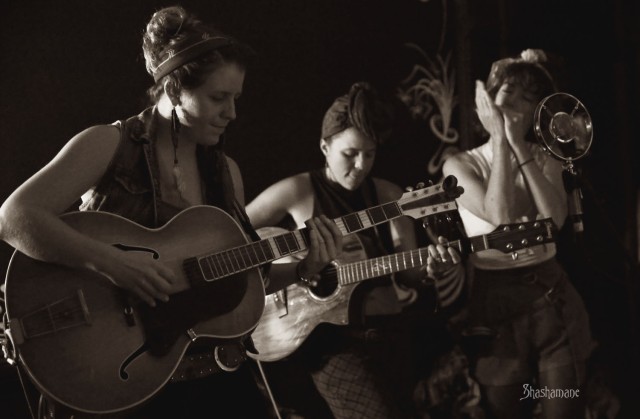 First up though was a support set from our own Hot Raisin, also playing as a trio of Tory, Mary, and Luke, their set was all original material this time, including a couple of newer tracks which have become firm favourites of mine already.  Both Luke and Mary were sporting new guitars, they sounded absolutely fantastic. I thought they played flawlessly and Mary’s playing was just sublime. Much credit to Chad and Phoebe for their part in the great sound too. 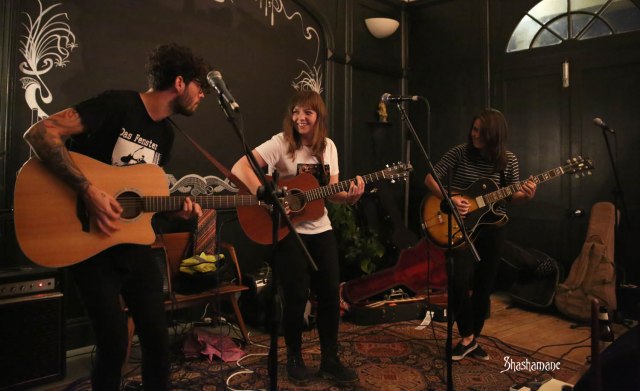 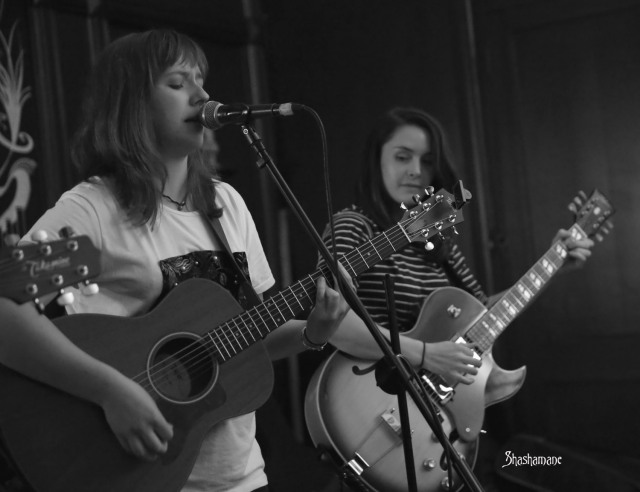 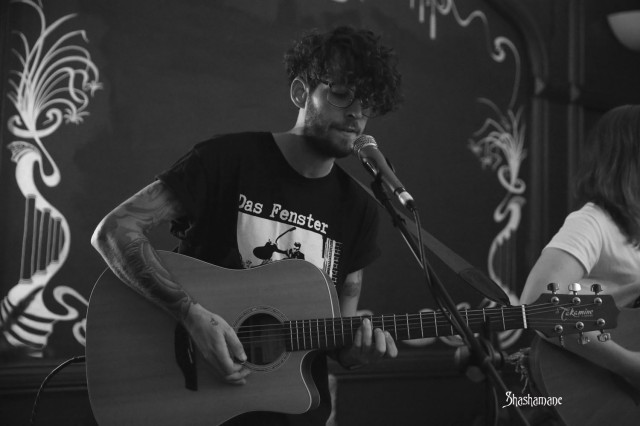 I’d only previously seen the more regular acoustic lower key summer gigs at Eaton Park Cafe before, with musical accompaniment for diners. A great and beautiful space it is always enjoyable to visit but although some of the inevitable chatter of some of the other events was to be expected it’s nevertheless annoying when wishing to listen to the quieter more subtle performers. This first proper ticketed gig at the venue (I think it sold out too) had an atmosphere which was a different kettle of fish entirely, a proper paid gig without dining tables, great attention to sound detail, and of course the return visit of the Rainbow Girls who are absolutely adored in Norwich.  So there was quite a sense of musical *occasion* about this one which is a good thing, a packed out Eaton Park Cafe full of attentive music fans who were also really up for it and noisy in the right places.  Openers Hot Raisin went down really well and Rainbow Girls blew the roof off!

It was dark and atmospheric – Bicycle Shop style mood candle lighting – and opening with a powerful Song for Standing Rock the Rainbow Girls played to absolute perfection, whilst also making it seem effortless.  Not only does this format highlight the lyrics and messages of the songs but also plays to the strengths of their stunning, tight harmonies.  One, sometimes two guitars and always three voices gathered around the single ear-trumpet condensor mic this was really special stuff and we all knew and felt it too. The power of the words with this playing and delivery caused goosebumps and a welling up of the eyes at times but then they could balance the mood with something like a cover of the Velvet’s Stephanie Says and not only that but get the crowd to sing their part too … and the audience also did it pretty well!  Vanessa’s heart remained intact with everyone doing her wished for fist pumps on the “It’s so cold in Alaska” refrain. 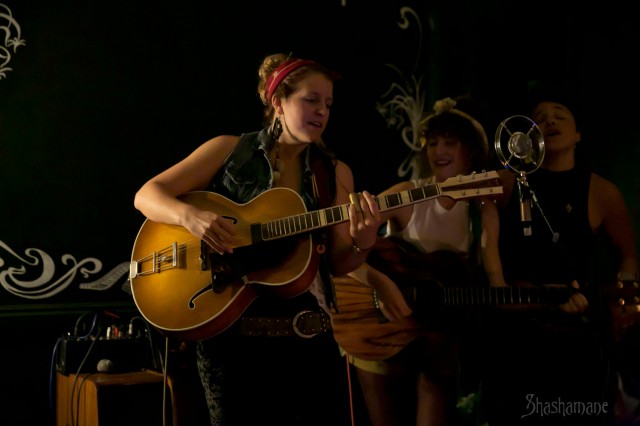 I’ve them ten times now and loved the Rainbow Girls from the very first moment I saw them in that infamous gig they referred to at the Ten Bells some years back and they always blow me away but tonight … well, this was something else again, the ‘less is more’ effect of this format totally bowled me over and 52 hours without sleep … it’s hard to imagine how it could be any better but if it can be, those seeing them once they have caught up on their rest are in for an absolute treat!  They are just born to play, they live and breathe music and it is a joy to behold when they play. No matter what subject they are covering (or how tired they are!) they play with passion, sincerity and enthusiasm, the feeling always comes over. 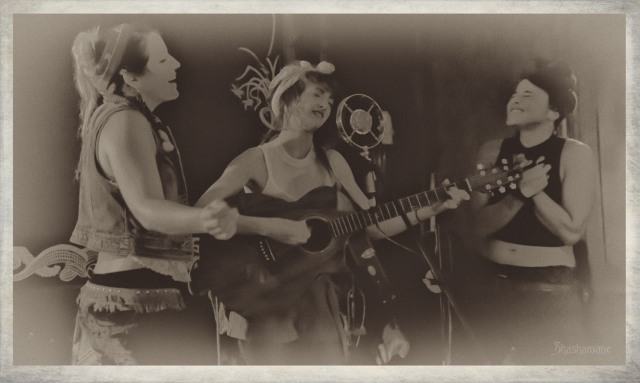 There were only one or two songs from the previous albums, all the rest were from new album American Dream (which they have recorded themselves at home – “You can hear the refrigerator!” – their third album, officially released in November) or the sessions for it, all of them just superb.  I bought myself a copy of the new album (and a t-shirt, designed by the amazing Caitlin) and look forward to playing it lots over the coming days, weeks, months and years.

Falling into the British mindset I was concerned for them having played their first gig of the tour on the very day of their arrival and following that with a drive to Newcastle for the second but these are California girls who think nothing of a 14+ hour drive let alone four, and although touched by our concern think we need to widen our horizons a bit! 😀  Judging by other amusing comments we probably also need to widen our roads some too!

They have a great connection with Norwich but such is their manner and charm they must surely make friends everywhere they go … and new fans of their music too. Tonight the music ended with the crowd begging for more, and getting it, and even the Rainbow Girls wanted to finish with just one more, a superb cover of the Carole King and Chiffons classic ‘One Fine Day’ (nice synchroncity as it’s a favourite in one of my recently created playlists).  A truly special gig, I was savouring every second.  All the songs moved me and their natural ways between songs charmed me all over again.  All power and much love to them, they have things to say and are getting the message across in the best of ways, there’s such passion, sincerity, honesty and purity to what they do and a lot of joyous moments too. 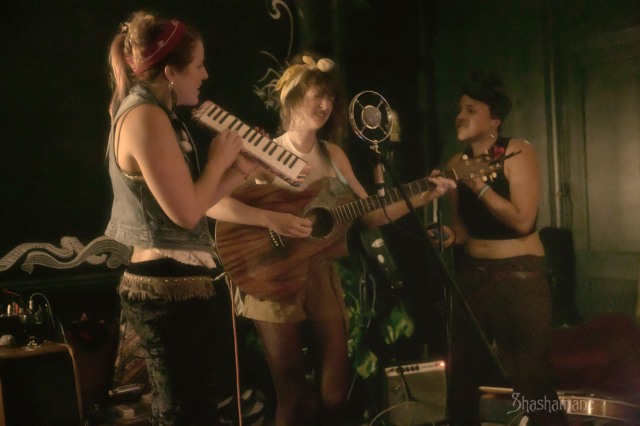 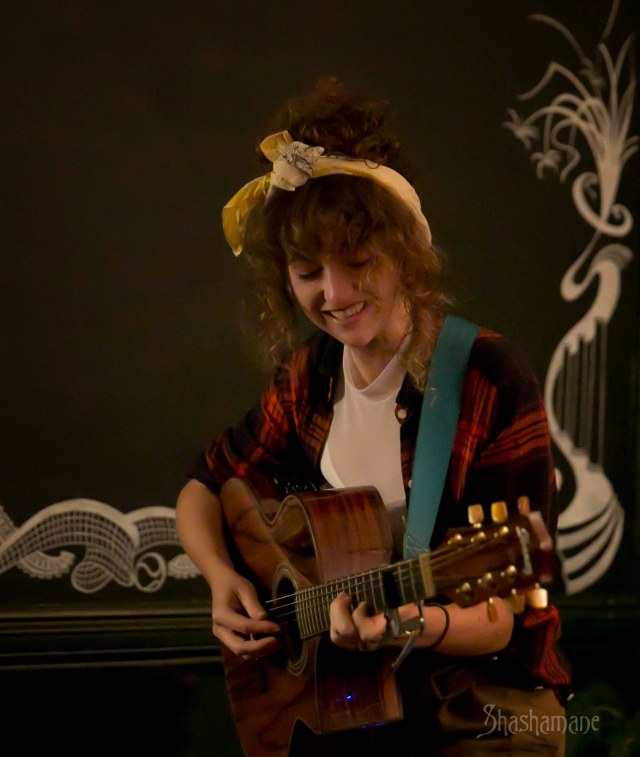 Oh how good it was to see Rainbow Girls again, especially on the same billing as Hot Raisin.  I’ve missed their special presence, energy, humour and music so much … I felt a bit reluctant to part at the end of it all but I won’t say my goodbyes because I know that I’ll be seeing them again.

Rainbow Girls continue their tour with a gig in Newcastle tonight (Thursday), whilst on the same evening Hot Raisin head to the Burston Crown for a double-header with Turf Club Racebook.

Well done to Eaton Park Cafe and the sound team, this arrangement can really work as a serious new music venue. Thank you Rainbow Girls, Hot Raisin, Chad, and Phoebe, my new favourite gig of the year, which earned a deserved standing ovation. It was a total delight. Can hardly believe we are able to still enjoy them in venues of this size, they are total stars in our eyes and the rest of the world may catch up at some point. Brilliant multi-instrumentalists, great songs, the tightest harmonies I have ever heard, a message to spread, highly charismatic and charming and just the loveliest, most wonderful warm people … what more could anyone want. Absolutely fantastic. 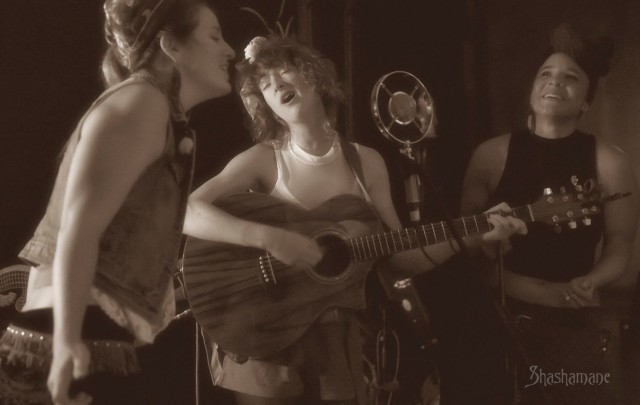 ’til next time Rainbow Girls, and that one fine day when I see you again … 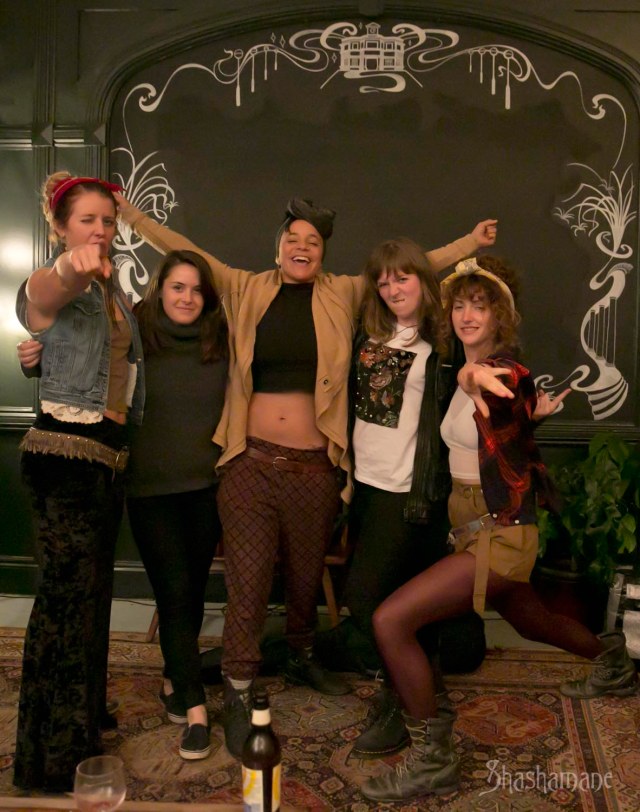 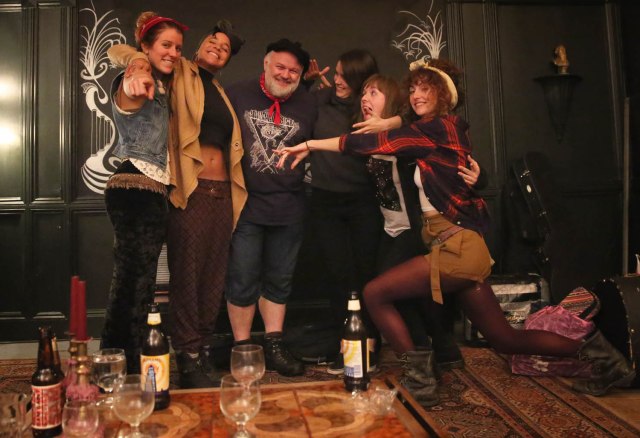 *UPDATE*  –  The following evening I had the pleasure of seeing Hot Raisin again in a double-header with the excellent Turf Club Racebook at The Burston Crown.  A terrific traditional pub with a similar ethos to The Stanford Arms and likewise a commitment to supporting quality live music, especially local acts, and giving them the respect and care they deserve.  I’ve made a few previous visits to this place for the likes of Hope in High Water, Hello Bear, and Hot Raisin but I don’t just go there to see bands with names beginning with H, so thanks to the kindness of Alison and Mark offering me a lift it was good to see The TCRB again.  Tory and I immediately exchanged knowing smiles when we spotted we were both proudly wearing our new Rainbow Girls t-shirts from the night before.  The Raisins were playing in the same trio format as that gig with a similar setlist but managing to squeeze in a couple more of the newer ones they ran out of time for on Wednesday.  I’m really liking these a lot, Read Your Mind, Conscious, Midnight Gremlins are proving to be really catchy earworms that I find myself humming during the day.

It has to be mentioned that Billy does a fantastic sound here, always “on it” the bands sound every bit as sweet as you could wish for and the bar is well equipped with PA and monitors.  Graham was equally impressed and gave a nice compliment and thumbs up to Billy, and to Geoffrey for the invitation.  For the most part the set was played as a five-piece but with a segment in the middle where Graham played solo. Alas, The Turf Club Racebook have no physical EP as yet but they do have some recordings ‘in the can’ and from the number of times I have seen them play I have plenty of the songs in my memory, one of which being “Well, Yeah” which they closed their excellent set with here. 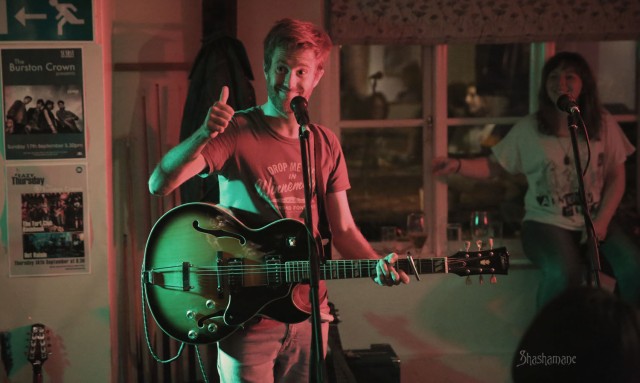 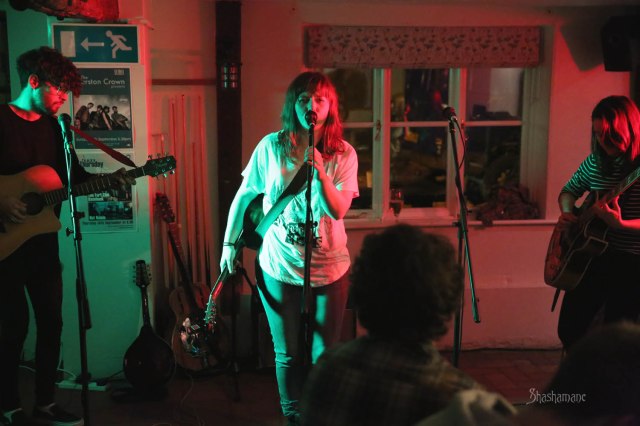 Tory with “those red and green demons either side of me … “ 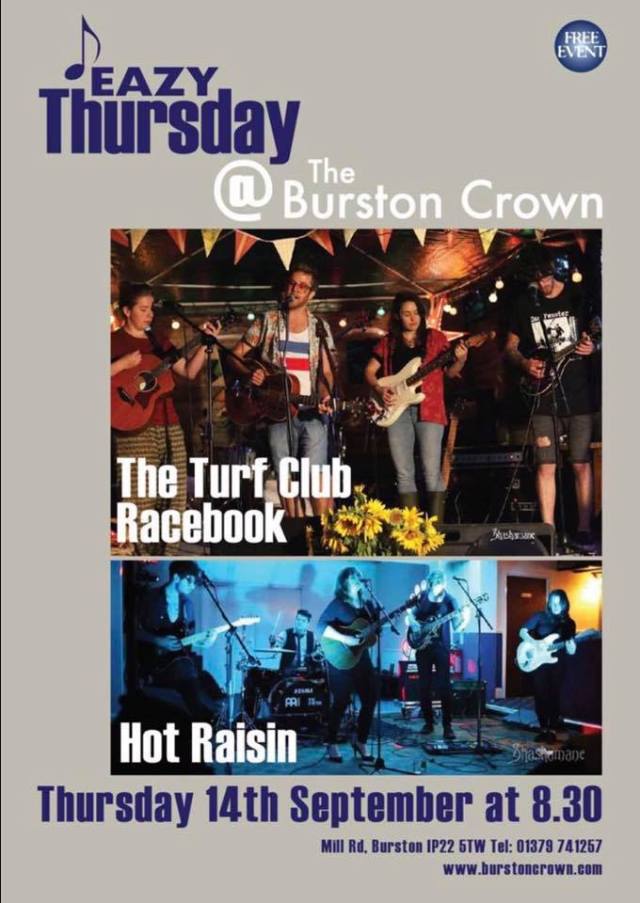 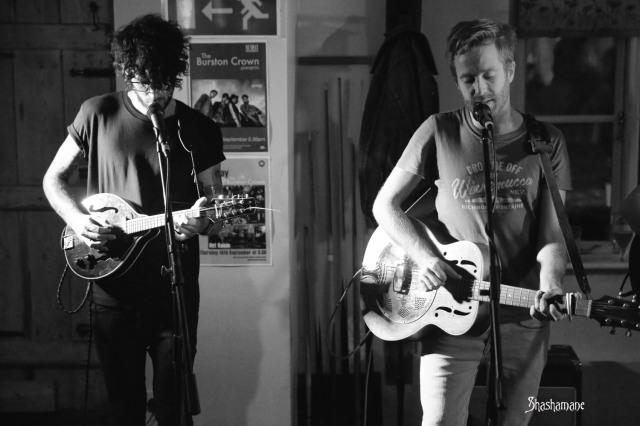 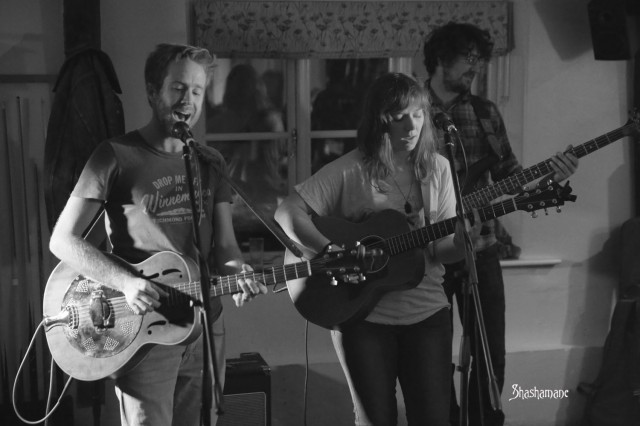 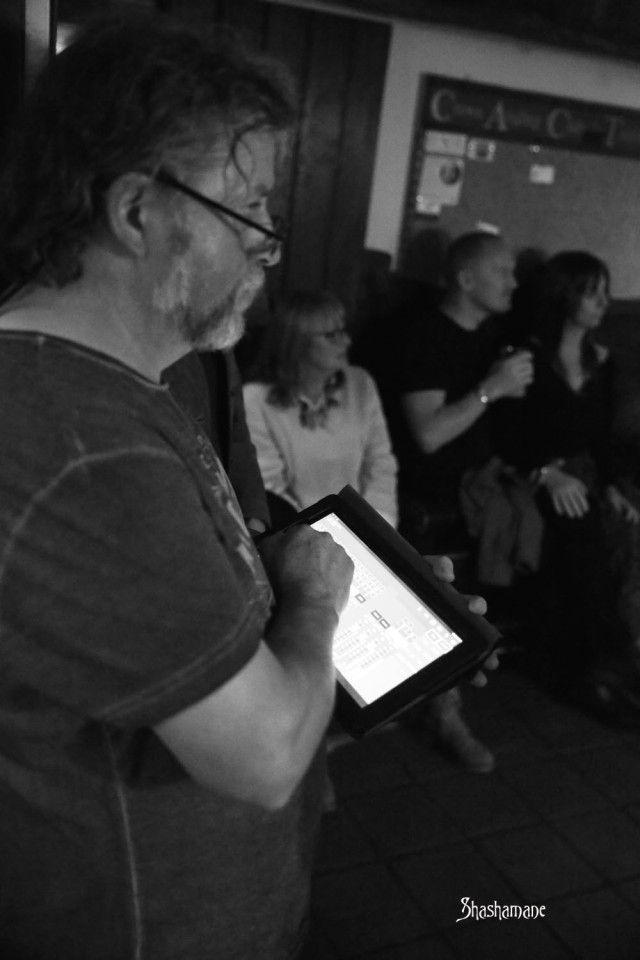 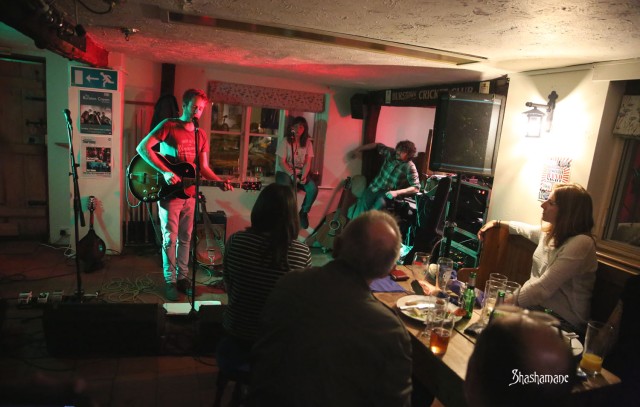 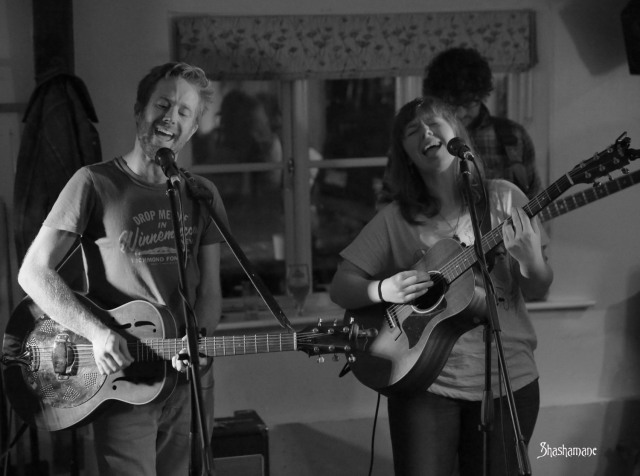 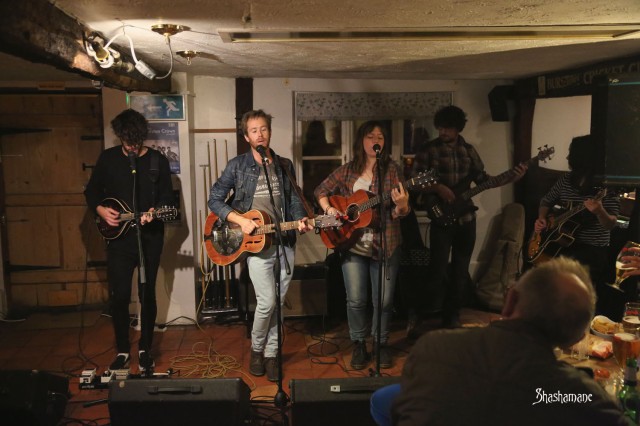