Rainbow Girls to return to Norwich 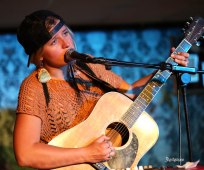 In something of a dream line up with the beloved Rainbow Girls playing in Norwich again after an absence of a couple of years, they will be supported by our own Hot Raisin, who will be playing as a three-piece (Tory, Mary & Luke).  The Rainbow Girls shall also be playing this one as a three-piece of Erin, Caitlin and Vanessa. I really missed them not being here last year but totally understood their need to play some dates at home in California as well as beyond in the States.  They have played many festivals and done a tour of house concerts, and also recorded a new album which they shall be touring thanks to James at Blue House Music.

The sound for this tour will be more acoustic and folky – obviously without drums this time but will of course feature their incredible harmonies and beautiful songs …. and their uniquely special positive energy.  The gig takes place at Eaton Park Cafe on Wednesday (13 September) and tickets are available. I am delighted that Hot Raisin will be supporting, I have a feeling both bands will adore and respect each other very much.  I certainly adore both bands.

Rainbow Girls is a collaborative of songwriters, multi-instrumentalists, vocalists, and California natives who’ve spent the last 4 years touring Europe and the US as a rock n’ roll band but who’ve recently returned to their folkier roots, embarking on a house concert tour across America.

The ladies came together at an underground open mic in Santa Barbara, CA in December of 2010 and spent the following summer busking and couch surfing around Europe. Since then they have released two studio albums and toured the US and Europe extensively. https://www.rainbowgirlsmusic.com/

“The name Rainbow Girls is misleading. With a name like that it is easy to assume this troupe is an easy-going, mandolin-plucking, sundress-twirling, but the Rainbow Girls are something distinctly unique and wildly more varied than a typical band; voices that occasionally sound more like Carolina Chocolate Drops than sweet-natured California coast girls; other times belting into jazzy riffs, and then shifting gears to a Country & Western lament.” Phil Busse, The Source Weekly

“Just occasionally one comes across a band for the first time who truly move, excite and lift one so totally as to get absolutely caught up in the moment and the music… They play with soul, spirit and energy, are talented and versatile musicians, have beautiful voices and write stunning and catchy songs. On top of this they are all terrific people with a great attitude and positivity who clearly adore playing and just want people to hear and enjoy their music too.” Richard Shashamane, Norwich Blog

“The Rainbow Girls describe themselves as ‘rock n’ roll, folk, world, Americana, funk, psychedelic (and) alternative.’ That’s a start. It’s far from the whole picture, though.” Brian McElhiney, The Bulletin

HOT RAISIN:
Combining roots Americana, retro infused Indie and Folk, Hot Raisin will transport you to a place of dreamy melodies and arrangements that are good for the soul.

On Sunday I caught Hot Raisin once again, playing in that very same format of a trio at the fantastic Stanford Arms in Lowestoft.  I often describe them as my anti-depressants as they never fail to lift my mood.  It was a lovely atmosphere in the Stanford with a good sized crowd, friendly as ever, and David nodding away to the music at the sound-desk and even somehow finding the time to cook up a delicious dish for the interval between sets.

I always enjoy my visits to the Stanford and love what David is doing there, he is a huge fan and supporter of local music, and runs a quite brilliant pub.

On the train journey back to Norwich I received a text from Shane O’Linski informing me that Andrea King was playing at The Plasterers, and I arrived just in time for her second set, which was beautiful and delicate as ever.  It’s hard to believe she has only been playing guitar for four years and even harder to imagine her not playing as she is such a natural and the effect I feel from the songs is of an empathic soul gently soothing the souls of others, or at least expressive to the extent that the listener feels the emotion of the song on a deep level. Beautiful.

Straight after this I made my way to Platform Twelve for Peter T’s Sunday Social Sessions as he was playing his set.   It seems it was a fantastic night from what I heard about the sets I missed earlier but I did catch some magic, from Peter of course, as always, and a real surprise set of a duo version of The Thinking Men to close the evening, playing like this for the first time.  This was brilliant stuff actually, think Nick Cave singing the blues!

For some reason there was only about a dozen people left by the time they came on but it was a treat to hear this set up. They have a gig coming up on Saturday at OPEN to coincide with the release of a new EP, some of which they played here. Support from Das Fenster, and Ghosts of Men.  This will obviously be a much bigger, louder affair but I do hope they play the duo format again some time.