It’s funny how often so many musical things connect, throughout the day I had Neil Young songs in my head, and at a balmy Guildhall midway through Ralegh Long’s set for Grapevine he mentioned he’d sent Steve a preview of one of his new tracks, which Steve observed reminded him of The Waterboys, so Ralegh played for Steve a cover of Fisherman’s Blues which in turn I rather thought sounded a little like Neil Young in this form!

Hope in High Water have this week been supporting Sarah Darling, Michael Logen, and Jenn Bostic for Nashville in the Round, sandwiching the Norwich date on Tuesday, an event which closed with an unfortgettable off-mic rendition of Dolly Parton’s Jolene.  For the second time  this week I heard this song performed live, by the brilliantly on-fire Morganway, introduced by Steve as “the greatest band in the world”.

Morganway followed that one with a new song to me, entitled Frozen in Our Time, which had me in goosebumps such was the power of this performance and the Native American feel of the beat, the drums almost tribal and with everything just feeling so right. Arriving seemingly fully-formed I think this is already quite possibly my favourite Morganway song, alongside other favourites Devil’s Canyon, and Hurricane which both appear on their new 4-track EP, “The Hurricane EP”. 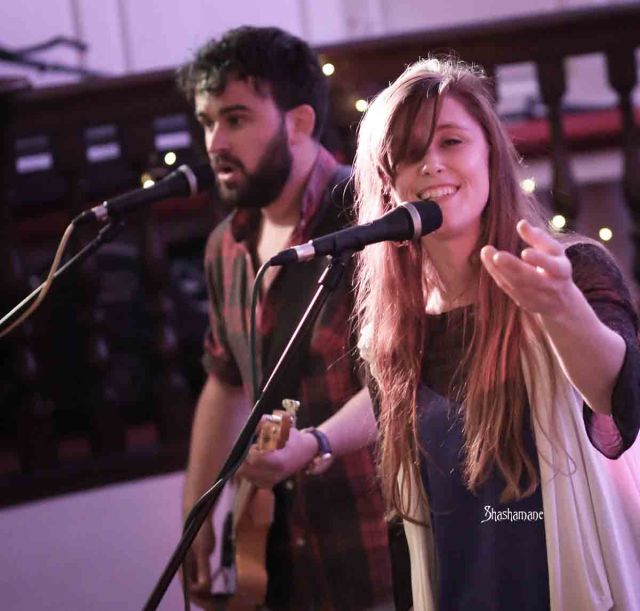 The last few times I have seen the band I’ve been in no doubt they have become Norfolk “Premier League” with great songs, variety, melodies, musicianship … and spirit. This is a band just so alive when they perform and Yve is a quite brilliant front-person totally in the moment and feeling the songs totally. She seemed to be especially shining today, lighting up the room with her soul and the whole band seemed to be having a blast too, Callum sporting a brand new cherry red Gibson.  They actually had people get up from their tables to dance, the people on the balcony were dancing too and they got a deserved standing ovation at the end of the set. For their encore they closed with a singalong Springsteen cover (Dancing in the Dark).  They had a good backline of amps and it was nice to hear such volume and punch in a central city venue, and the mix Dickie gave them was superb …. Matt’s keys were glorious, almost sounding like another guitar at times, it was good to hear him so clearly and their sound was spacious, just as it should be.  The past few times I have seen Morganway I have felt it the best yet, they just keep on getting better. A brilliant band.

A definite love at first sight since coming across Hope in High Water for the first time just over a year ago at a rather challenging gig, supporting the excellent Nikki Lane, I’ve subsequently seen them quite a few times in more attentive surroundings such as this.  Josh and Carly are extremely lovely people and they have a great chemistry as musicians too, you can feel their connection on many levels and they’ve hit on a great musical formula after their punk pasts with Hope in High Water.  Both with distinctive voices there is a magic in the way they sound together and songs such as She Cries and Angels in Heaven positively soar.  They closed the set with the song that first truly drew me into their world, the wonderful Who’s Gonna Hold Your Hand.  All of these tracks are on their debut album (released 26 May) entitled Never Settle, a title given added poignancy with one of Carly’s background stories on the night.  The album itself features a full band whereas live they play as a duo with guitar and banjo. They launched the album in London last week, with Robert Chaney and Laura Tenschert, both of whom played with them at the Nikki Lane gig, and Grapevine last year.  I find their music so soulful and each song has such resonance, storytelling experience and expression at its best. Meaningful and touching somewhere deep within the soul. New single and video “Four Strange Walls” is an original but the strength of the personal songwriting makes it feel like a classic from the country blues gospel tradition … a song of sorrow, salvation and apology for the past. Just brilliant writing and to see Josh and Carly together is to witness two connected soulmates.

If I have any regret about the night at all it was that I didn’t get much opportunity to catch up with Josh and Carly a bit more, so busy was the night in what must have been a close to capacity Grapevine. A hot one too making it a two-fan night! It was a hot one but thankfully not quite as bad as I had been led to expect. The audience included a number of friends, some I had not seen in a while, most notably Alabama’s (and Yve’s) Tone Brook!  Back in Norwich for a month or so after an absence of a couple of years.  It was so good to see him again, I hope to catch one of his Norfolk gigs again very soon. 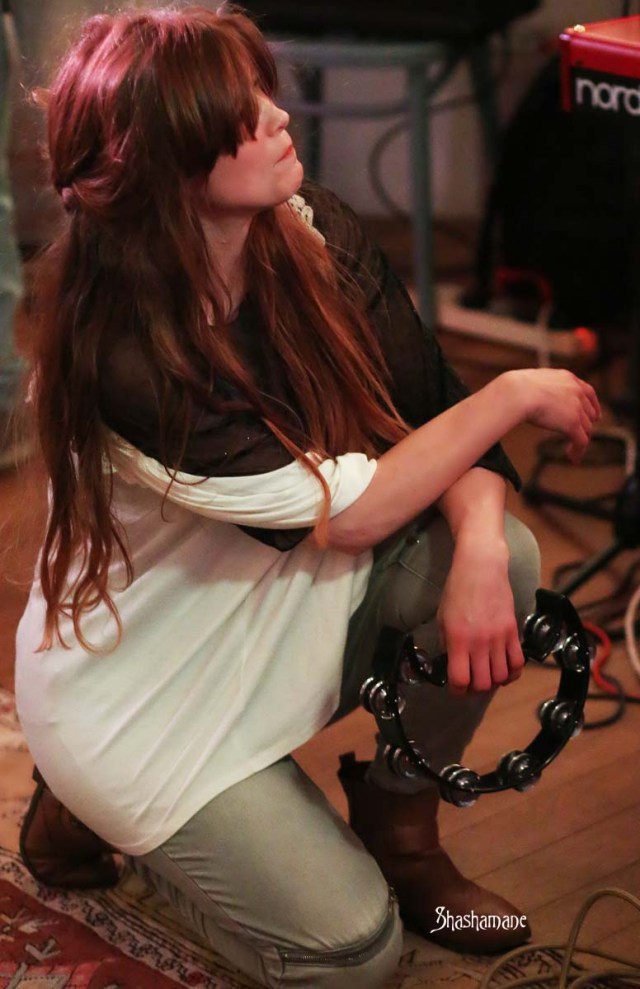 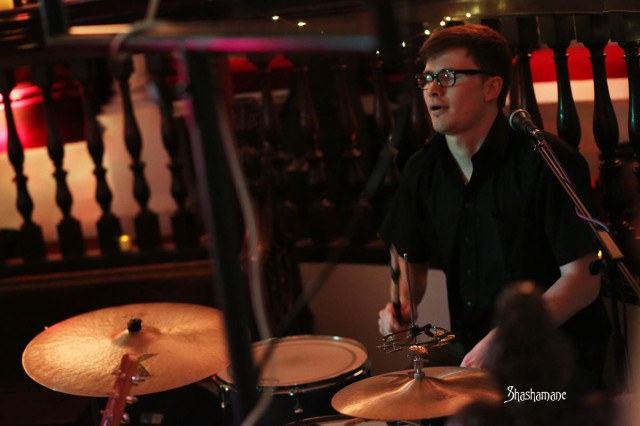 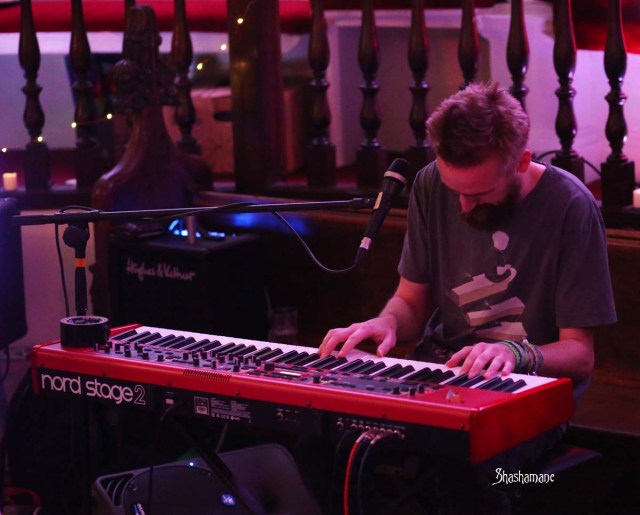 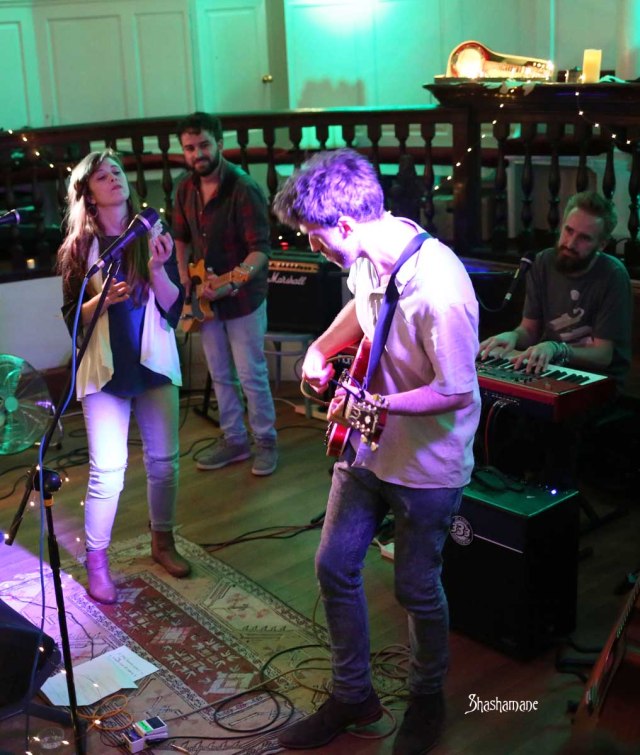 A sensitive set, on electric guitar, Ralegh Long travelled up from London for this gig, his second at The Guildhall, he seemed to be enjoying the set too, taking a selfie with the audience and having the idea of getting the audience to harmonise in this lovely building before realising it was a bit complex and thinking better of it, and asking for a fan to be turned off as it was making his hair look “a bit too ’80s”!  But also gave interesting insights between songs. He too had CDs available and currently has a Pledge campaign for his second album.

Great scenes at another lovely Grapevine night put on by Steve and Jan, it isn’t often you see an audience at a gig in a cafe erupt as one for a standing ovation, and as Josh said, there is a good and supportive vibe about the Norwich music community and nights such as this put on by and for music fans … all of the ticket money goes straight to the artists performing.  This is actually a surprisingly rare thing in many cities. The best thing of all about the Grapevine audience is that it is attentive and respectful but also demonstrably appreciative which heightens the enjoyment for all concerned.

Despite being up til 4am writing this up and editing photos/videos I still awoke with a good feeling from a buzzing gig and am enjoying listening to “Never Settle”, with the Hurrican EP line up next! 🙂 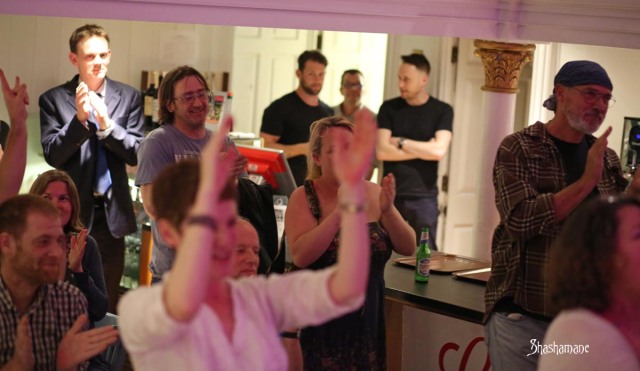 www.norwichblog.com www.shashamane.etsy.com www.facebook.com/ShashamaneArtPhotography www.facebook.com/NorwichLiveMusicPhotos you can find my prints for sale on Etsy at http://www.etsy.com/shop/shashamane?ref=si_shop and at Artfire: http://www.artfire.com/users/shashamane and www.facebook.com/ShashamaneArtPhotography
View all posts by shashamane →
This entry was posted in Grapevine at Bedfords, live music and dance, morganway, Yve Mary B / Morganway and tagged grapevine for music, Guildhall norwich, Hope in High Water, morganway, norwich music city uk, Ralegh Long, Tone brook. Bookmark the permalink.