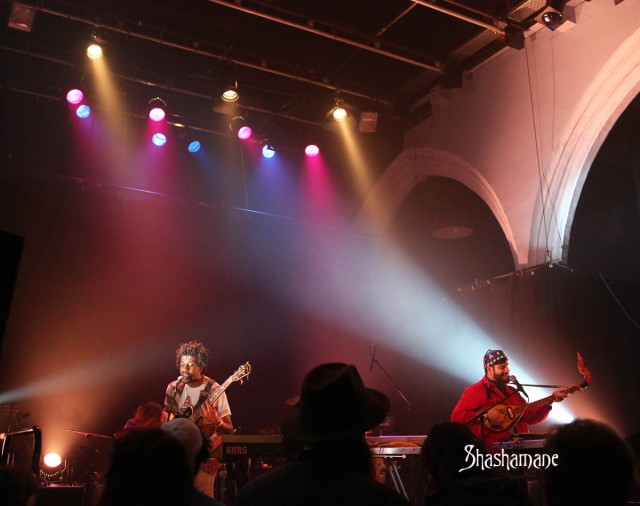 Flamingods are a band I had the good fortune to catch at last year’s Norwich Sound & Vision Festival, the tail end of their set at any rate.  I recall they divided opinion slightly on that occasion, which is no bad thing, but also recall that I was firmly in the camp of those that loved them even if my memories of that full on evening of relentless festival gig hopping has since become hazy.  Alas, the NS&V Festival is taking a sabbatical this year and due to illness there were no Ghost Noises on this PONY UP night either, which was a shame as I was looking forward to catching them for the first time but still on the bill were the wonderful Organisms, led by former Grazing Saint Joe Quinn, alongside Lizzy (guitar and vocals), Paul (bass, and another former Grazing Saint), Bromley (on keys with a broken hand!), and Alex on drums.  They have only been together a short time but have already recorded an album (complete and due for official release in July), a new single released this week and a small number of increasingly high profile gigs but this was their biggest thus far.  They did not disappoint and rose to the occasion well, with great sound and lighting at NAC plus their strong songs and charismatic, tortured presence from Joe on guitar and vocals, even adapting the words towards the end of the set.  The band have a good chemistry, dynamic and balance which is ever evolving, each with their own quiet and valuable input.  It was good to hear Bromley with his unique contribution on keys … and Transformers rucksack by his side!  Fascinating band with a distinctive sound, doing something genuinely different and enjoyable. Their album – recorded at Tontena – is a treat and I shall write more about this presently.  I should also add how pleasing it was to see members of Flamingods also at the front of the audience enjoying this set.  I love to see this sort of thing and respect them even more for checking out their support.

Within minutes of coming onstage, Flamingods surely but surely hypnotised and enchanted me, some good melodies, exotic psychedelia and repetition plus a bit of musical changeovers, it was all quite compelling and atmospheric.  The crowd were digging it and there was even a flamingo present down the front throughout!  After a brief minute or two outside of the auditoriun I returned to find the entire band had apparently switched instruments but this was no gimmick as the sound continued to evolve and increase in tempo.   The final three or four songs were heavily Krautrock-influenced and faster and faster with an ever more engaged audience.  I guess the NAC was probably just over half full but everyone there seemed to be having a blast, especially those down at the front for the frenzied finale where their singer was indistinguishable from the audience he had joined in with.  Hints of Hawkwind, even Tinariwen at the most psych, and increasingly kraut as the set progressed but their whole does not sound like anyone else at all, including bit of Celtic, rock, psych and electronica. The trajectory and tempo of the set seemed to mirror my own enjoyment of it – I had fun from the off but increasingly adored it, just when you thought they couldn’t take it (and us) any higher they did precisely that.

As I drifted out of the auditorium at the end I could hear the track Roadhouse being played through the house PA, from Russia’s Gnoomes, whom Organisms shall be supporting at OPEN on 2 June with No Holy Men. All three bands are great, here is a taster of Gnoomes’ last visit to the fine city.

The previous Friday I attended the Ideal Hum Takedown #2 at Karma, with music over three floors. My personal highlights being Magoo, Blisster, The Vicars of Stiffkey and the increasingly huge and gloriously disturbing Soyuz Rats.

Saturday was probably my favourite regular music night in the city, the eclectic and unpredictable OosWolf at Cactus Cafe Bar which this week featured Bobby Sherwood, The Wash, Olinski, Chai, and one of my new favourites, Of the Clay.

A month or so ago I had not come across this duo but thanks to Shane and OosWolf our paths eventually crossed and I am so glad that they did. Now I have already seen them five times and indeed I saw them again on Sunday (towards the end of a five gig Funday, having totally failed to squeeze into a rammed FCBT I headed to The Wildman for the Dry Tortugas, and later The Walnut for Das Fenster amongst my gig-hopping day), there is something about their sound and delivery that taps into a place deep within my aching soul, bringing me to the edge of tears, not necessarily through extremes of sadness or joy but the sheer beauty and intensity of what they do. Incredibly moving vocals, guitar, violin and even a shruti box. Music in its most pure and magical form, plus a bit of humour with a new surprise twist on a well known local song. I love Of the Clay. You will too. See them.