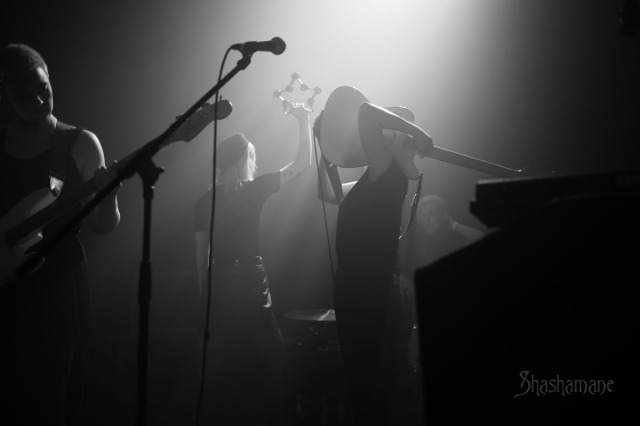 Unlike the lucky souls who saw PINS in two previous NS&V visits to the Mash Tun, my first encounter with them was when they (in my humble opinion) rather stole the show with an incredible set supporting Honeyblood at Norwich Arts Centre last November.  I was blown away by them on that occasion, bought their vinyl album and have been buying up everything by them ever since, including pre-orders of their recent releases, so was obviously really looking forward to their return. I was certainly in the mood for this and even more so when upon arrival Will told me what a treat I was in for from all three bands on the basis of the soundchecks he’d heard. I couldn’t wait.  Using the time before the doors opened I took a look around the new exhibition by John Scarratt : 13 Futures inspired by Black Mirror. One wall had the caption How could the world be made a better place? and invited people to add their suggestions. The first I saw were “Live in the now” and “Delete the entire catalogue of Ed Sheeran” …. I knew I was in the right place!

Coming onstage about 8:15pm were Yassassin, named after the Bowie song and relaxed cool as a cucumber, munching an apple and launching into thirty minutes or so of pure joy and  energy. I adored them. The enthusiasm, joy and energy they put into their set was irresistible, and they totally mean it too, their pink-suited “RIOT” bassist Raissa later showed us her Stooges and Ramones lyrics tattooed on her arms and legs.  I think it is fair to say that they blew just about everyone away, between sets I was overhearing rave comments about them. An absolute joy and it’s hard to believe they have only been together for a year they were total fun and had me beaming with joy. They know what live music is about. The three remaining pieces of vinyl for the tour had, needless to say, already sold out by the time I reached the merch stall. 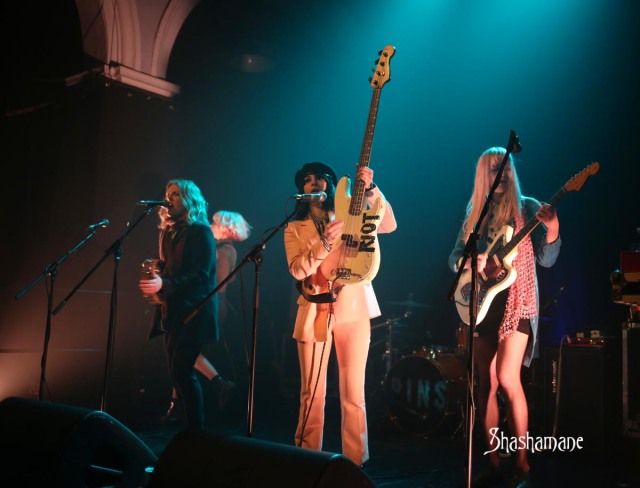 I’d also heard brilliant things about the second act, Denmark’s Baby In Vain.  Charming and rocking hard they nevertheless took a couple of songs before things totally clicked for me but when they did they had me hook, line and sinker too.  A tremendous force of energy, these three girls have the power and the songs … and I realised they created all of this without a bass guitar!  Definitely another act to look out for. I loved them too.

By the time the clock was inching towards 10pm I was already in place near the front for a much anticipated set by the glorious PINS.  To me this is a band that absolutely have “it” with the right blend of attitude and charm, plus great songs and musicianship, as well as the confidence to open the set with the mighty recent single Aggrophobe. On record the narrative vocals are delivered by the one and only Iggy Pop who was so impressed by the band and the song he happily lent his distinctive voice to it but live they were delivered by bassist Anna.

It was a blistering start that melted into Bad Things, Serve the Rich and another highlight from their new EP – All Hail.  The strength of the songs and the power was relentless and soon another favourite of mine – Molly – was played to the very impressed crowd.  The one cover of the set was a magnificent version of Dead Souls as a homage to their city’s Joy Division.

Such a great live band, dripping stage presence and cool, each of them compelling to watch. Singer Faith prowls the stage, smashes the cymbals during Dead Souls, sits on the edge of the stage and even sings down on the floor among the audience, Lois bouncing around in wild abandon. Great songs, melodies, harmonies and attitude. Lovely people too.  God I love PINS.

The girls in the crowd were all invited to draw closer to the stage in the intro to Girls Like Us, which closed the set in fine style. Of course they were not going to get away without an encore and this consisted of Dazed By You, and Waiting for the End with more than half a dozen audience members pulled onstage to dance with the band.  This was the perfect finale to a fantastic night of exciting music for Pony Up. 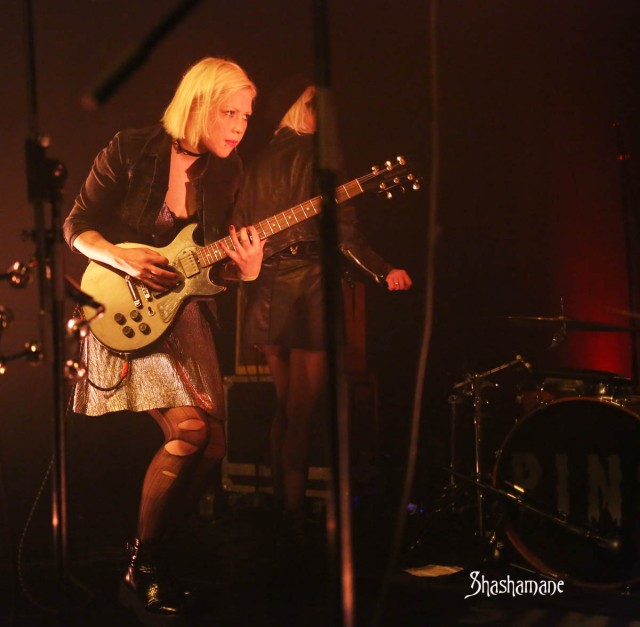 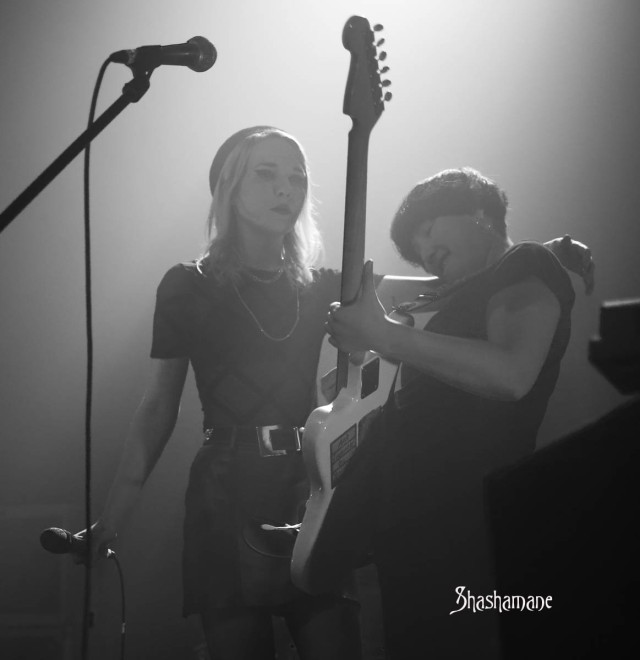 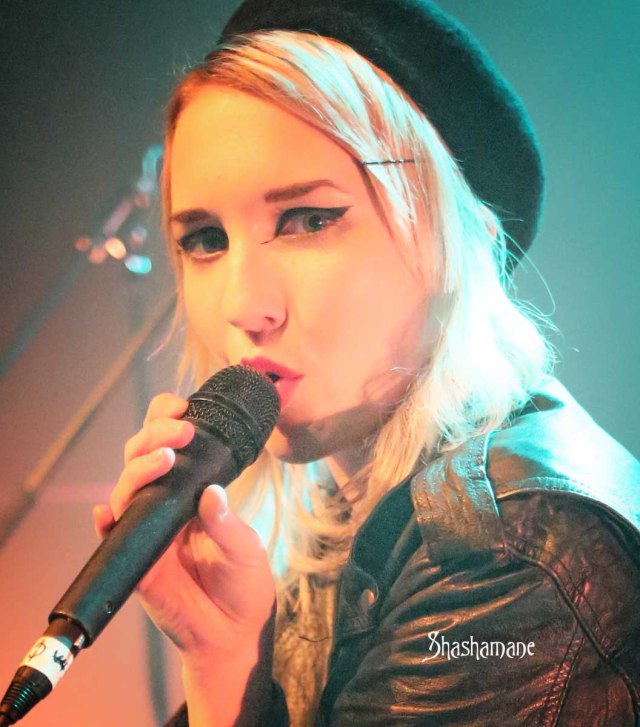 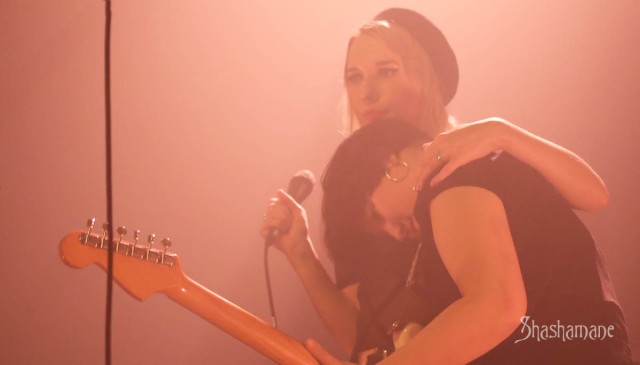 Great also to see these bands offering so much than is tangible with vinyl, cassettes and self-printed bags and shirts on offer as well as the digital formats. After buying the one gap in my PINS vinyl collection from the merch table I started to make my way to the Mash Tun for the Vicars of Stiffkey’s EP launch.  At the gate to the NAC I met with some friends and Lois and Kyoko from PINS.  It’s a rare thing indeed that anyone ever wants a photo of me but Kyoko asked for one with me and we had a fantastic chat about literature.  I had a great time and she really made my day with our shared appreciation of some authors and her recommendations of others. Thank you! Great bands and lovely people.

Three bands, all of them tremendous and all of them all-female. Superb – thank you PONY UP! This is another early “gig of the year” contender. It had been over a month since my last visit to Norwich Arts Centre, having missed a couple of gigs I’d planned on seeing here, for one reason or another but it felt good to be back, a venue equivalent of being back home!

At the Mash Tun I was just in time to catch most of the set by the Vicars, and pick up the EP – Live and Uncassocked – which was being launched and released by Off With Their Records.  They are a band I have been following for a couple of years or so and I’m delighted I finally have something to listen to of their work at home!

www.norwichblog.com www.shashamane.etsy.com www.facebook.com/ShashamaneArtPhotography www.facebook.com/NorwichLiveMusicPhotos you can find my prints for sale on Etsy at http://www.etsy.com/shop/shashamane?ref=si_shop and at Artfire: http://www.artfire.com/users/shashamane and www.facebook.com/ShashamaneArtPhotography
View all posts by shashamane →
This entry was posted in Best gigs, live music and dance, Norwich Arts Centre, The Vicars of Stiffkey and tagged baby in vain, norwich arts centre, norwich live music photos, norwich music city uk, PINS, pony up, The Vicars of Stiffkey, yassassin. Bookmark the permalink.