Hazey Jane are a four-piece folk band from Hackney who recently invited me talong to the Norwich leg of their Us on a Wire EP launch tour, I checked them out and liked what I heard.  They spent a few days in the fine city and played the Birdcage last week on the same day I was seeing Hope in High Water at The Burston Crown but luckily they had another city date lined up at the beautiful Bicycle Shop Handlebar.

For some reason I didn’t realise that Jake Morrell was sharing the bill. It’s been a while since I last saw him, probably his Tilting Sky date at Norwich Arts Centre last summer, he was playing with a full band on that occasion but has been playing some solo dates lately, as he was here. Recently relocated to London, a city he described as “aggressive” but with random moments of kindness which inspired his brand new song he played here, which was a highlight actually. He has at least found some kindred spirits in London in Hazey Jane whom he met at The Bedford.  He plays with a quiet confidence and his performance was flawless and with some interesting stories.

This gig was a great opportunity to hear Chalky Seas in a decent setting, having only previously caught them at Gonzo’s.  I was really impressed with them, absolutely gorgeous harmonies and their set got progessively stronger, closing in beautiful style unplugged in the audience. They were actually giving copies of their EP away and I’m glad to have mine and look forward to giving it a listen.

Hazey Jane too are very strong on harmonies, playing a lovely set and with endearing chat between songs and during tunings. It was good to see the Bicycle Shop pretty much full for this visit and the atmosphere was so chilled and attentive.  Named after a Nick Drake song it’s clear he is also an influence and inspiration for Hazey Jane the band.  I think they’ll be back they seemed to have a great rapport with the audience who liked what they heard. 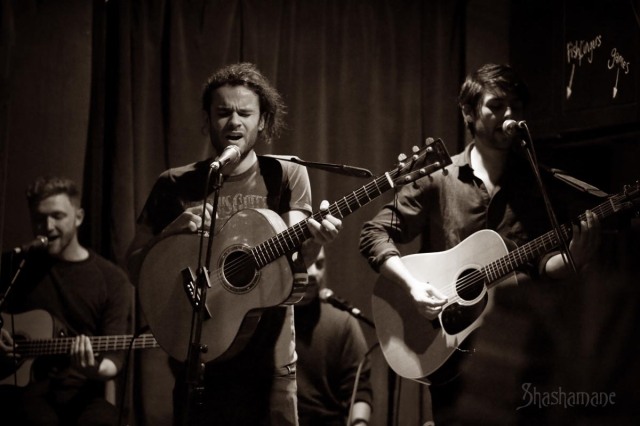 I popped out during their encore to try and catch the end of Yve’s Sound it Out night at the Murderers.  Jim Niven was playing when I got there and I caught a brilliant piece around the subject of Dr. Alice Roberts!   Next on was Shane who had also just arrived and he played a couple of songs with Adrian Howes who joined on bass. 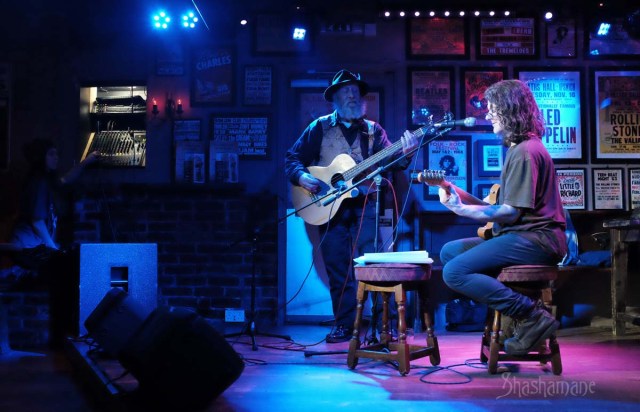 Over the weekend I also attended another of Shane’s typically eclectic OosWolf at Cactus Cafe Bar, with sets from Chai, Bobby Sherwood, Playhouse, Of the Clay, Camille Davila, and a one-off performance from Joe Quinn and the Venusians, all eight or nine of them! 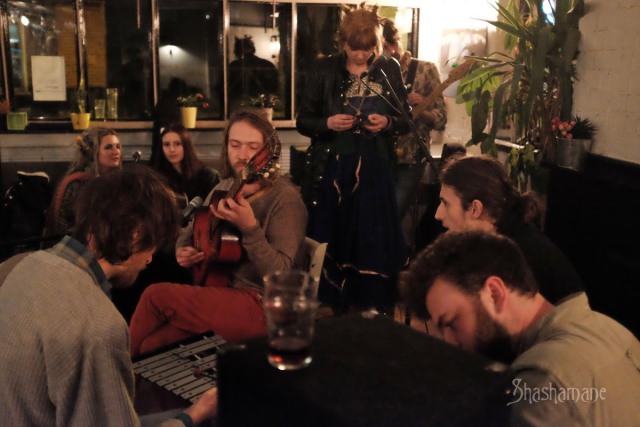 Joe and the Venusians

It’s about the third time I’ve seen Playhouse this year, I’m enjoying their sets a lot, as a duo and couple they compliment each other well and with shared songwriting too.  Highlights were Sitting Here Seductively, Glass of Wine and the new songs they previewed, one having a great Gainsbourg/Morricone western type lilt! 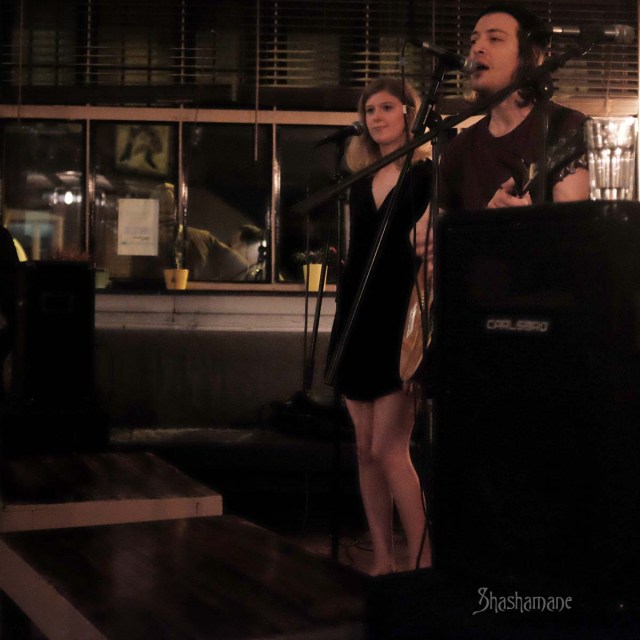 Of the Clay were a delight with their Irish flavoured Appalachian styled songs, even on an inspired version of The Singing Postman’s ‘Ave Yew Got a Loight Bor? but they had a challenging start to their set when one of the menacing looking crowd outside from next door’s “white collar boxing” event decided to barge in like a drunken bull in a china shop and dance rather “confrontationally” in front of the band.  Getting little reaction or attention he seemed to need so badly he was eventually escorted out to wild cheers. The Cactus music crowd always deal with these things so well and peacefully. Everyone was glad when he went and the party then began. The boxing event may have had a “strict dress code” but an idiot in a shirt and tie and still a bloody idiot. 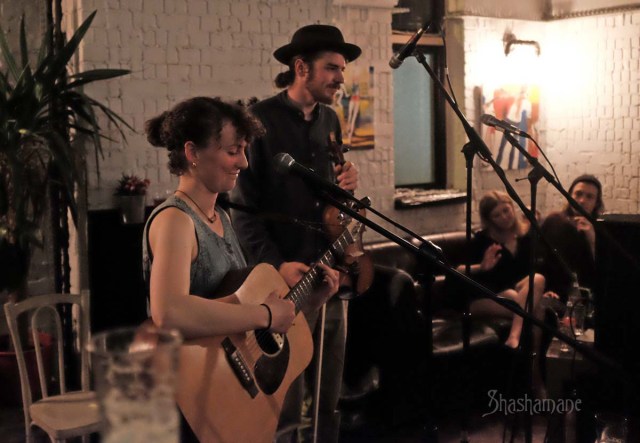 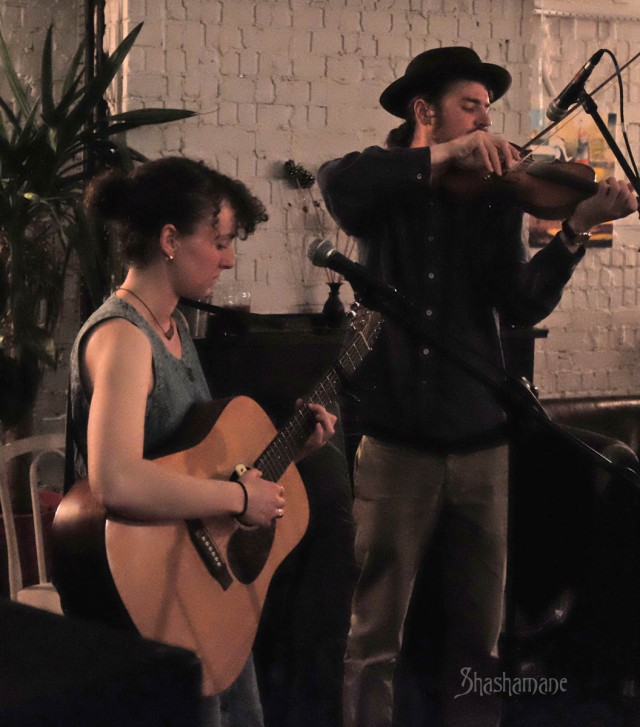 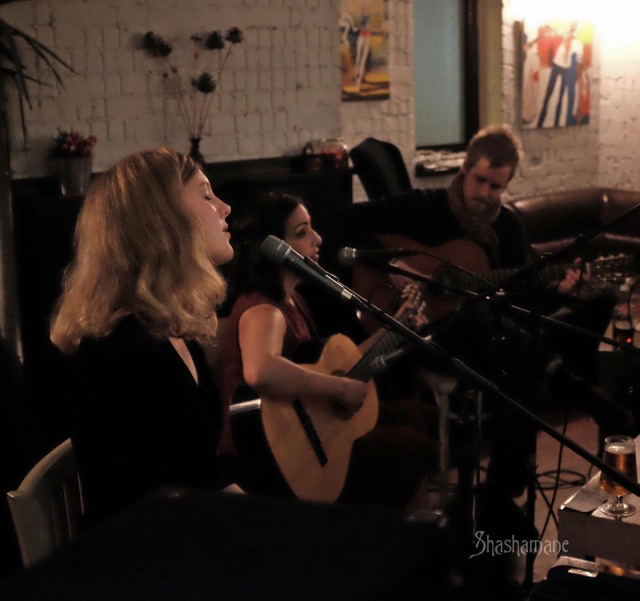 Camille was once again joined by Pat Falgate and Bridget from Playhouse. The beautiful songs were just what the doctor ordered after the unwelcome adrenaline rush from the unwelcome oafish lush a short time earlier.  Her songs worked like a soothing musical hug and perfectly restored the calm, chilled and easy-going vibe of Cactus that I love so much. 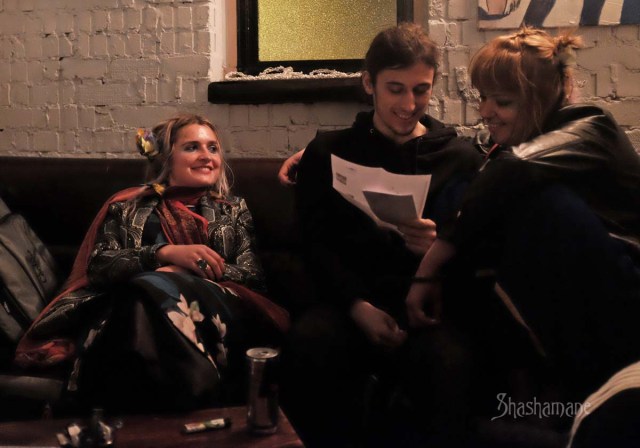