A sort of home-from-homecoming for Marty O’Reilly with this visit as Norwich must be feeling a bit like a second home when on tour in the UK.  Ever since his first visit to the fine city some three years ago with those other Californian gems, the wonderful Rainbow Girls, Norwich has also taken Marty and his Old Soul Orchestra to its heart.  It sounds like the feeling might be mutual.  Marty, from Santa Cruz, this year is touring solo and just playing smaller, intimate venues and he was welcomed to the tiny Bicycle Shop stage to warm applause from the sell out crowd sitting in candlelight.  For the second Tuesday running there were at least two sell out gigs in the city featering wildly differing styles of blues, the other being an exciting-looking Punk Rock Blues event at Bedfords Crypt featuring PowerSolo, The Phantom Cowboys and Hank Jd Sleek.  On any other occasion that would be a must-see for me but so was this as anyone who has seen Marty play will know he puts his heart and soul into the performance, playing with passion, intensity, and consumate skill. It was a pleasure and a privilege to be here for this incredible set of blues music.  An expressive and distinctive voice and a hugely talented guitar player, he’s a master of his craft with his resonator guitar and his own unique identity. His style of folk-blues, for me, always has elements of Irishness and naughtical tales among the many other themes covered with no small amount of gospel thrown in there too, written by a real Old Soul. 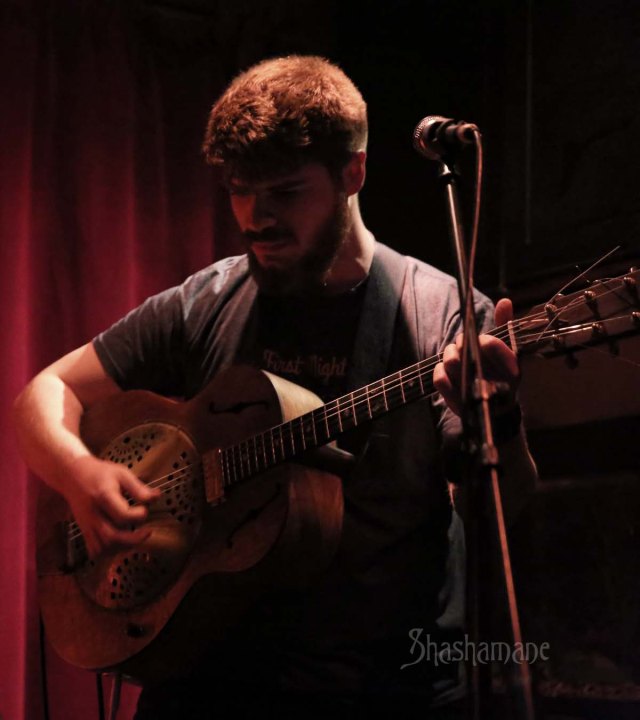 Introducing himself he exclaimed he’d only been at the Bicycle Shop a couple of hours but had already fallen in love with the place and wanted “to live here!”  Over the course of two sets with just his guitar and harmonica he held the audience rapt throughout every song and entertained us inbetween them with stories and anecdotes for some of the introductions (as well as asides about performing with an aquarium pump in the background, “That’s something else to tick off the bucket list!”)  He referenced and paid musical homage to the likes of Howlin’ Wolf, Doc Watson, and John Vandiver but the bulk of both sets was original material.

Previously I have only ever seen Marty performing live with the Old Soul Orchestra who are all brilliant musicians too, and in Chris Lynch a stunning violinist who is equally expressive and animated onstage but tonight it was just Marty, going back to his roots and the earliest days of his music career playing alone onstage and he held the audience for a full ninety minutes giving incredible representations of the songs in this pared-down format. His guitar playing is simply breathtaking and such is his technique that there were times, if you had your eyes closed, you would swear there were two guitarists onstage. Spellbinding.

Having recently lost my adored cat there were some lines in Cinnamon Tree that especially resonated with me on this occasion, the feelings expressed are pure poetry and really beautiful.

I bet she’s hit the railroad and she’s hopping cars,
bet she’s aboard a great ship, and she’s lost at sea,
but she’ll come bounding back again, as soon as she smells that cinnamon,
and I’ll bury her sweet bones beneath that tree

It’s not the body of the beast that holds its spirit
it’s the spirit itself which I adore,
it’s her love and it’s her name,
not the confines of her frame that make me love her
love her so much more.

Next year Marty will return with the band and I am confident there will be a Norwich date, over four or so visits Marty and the boys have cemented quite a bond with Norwich as evidenced by the number of faces in the audience who were also at those Arts Centre gigs, and if the previews of the new material played here is anything to go by the next album will be a gem. Be sure to get tickets if you ever see this name playing somewhere near you. 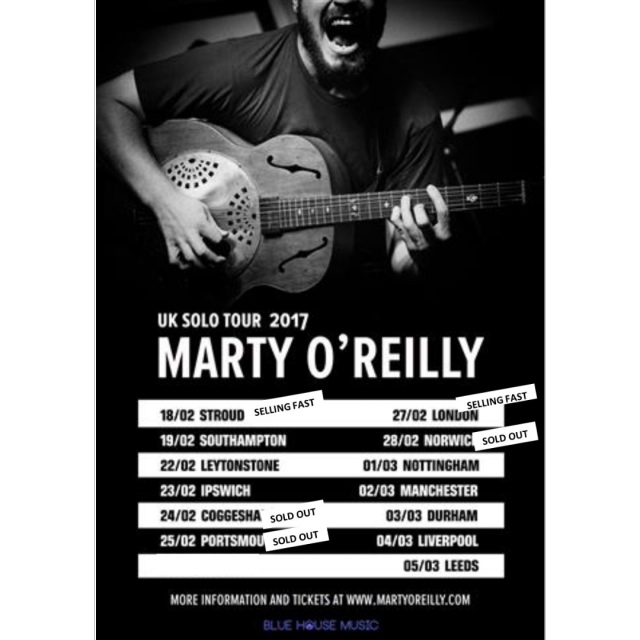 Big thanks to Marty, to James at Blue House Music, Conor on sound and the door, and The Bicycle Shop.

Clip from last year’s NAC encore, taken into the bar…

2014’s amazing interpretation of Smokestack Lightning at Norwich Arts Centre, deservedly one of my most-viewed videos. 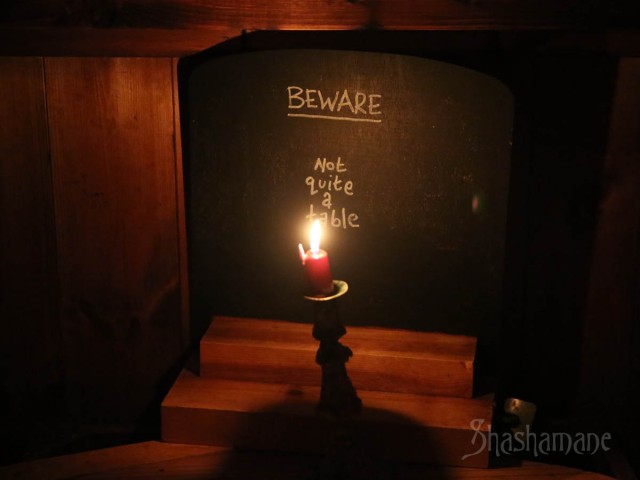 www.norwichblog.com www.shashamane.etsy.com www.facebook.com/ShashamaneArtPhotography www.facebook.com/NorwichLiveMusicPhotos you can find my prints for sale on Etsy at http://www.etsy.com/shop/shashamane?ref=si_shop and at Artfire: http://www.artfire.com/users/shashamane and www.facebook.com/ShashamaneArtPhotography
View all posts by shashamane →
This entry was posted in live music and dance, Marty O'Reilly and the Old Soul Orchestra and tagged Blue House Music, Marty O'Reilly, norwich music city uk, the bicycle shop. Bookmark the permalink.