Norwich Arts Centre has hosted some beltingly great gigs this year, most of my favourites have been gigs at this deservedly recognised beauty of a venue.  As well as simply being a lovely arts centre staffed by wonderful people it attracts world class acts to the city to play here. On a Sunday night close to midwinter Norwich was hosting some big gigs, a sellout for Frank Turner at UEA, Seth Lakeman at OPEN, plus gigs at the Waterfront and countless pubs. Indeed I popped in briefly to Gonzo’s before heading to the Arts Centre and caught a lovely set by Turf Club Racebook and, pleasingly, Andrea King who was unable to take her slot at the previous night’s OosWolf at Cactus. 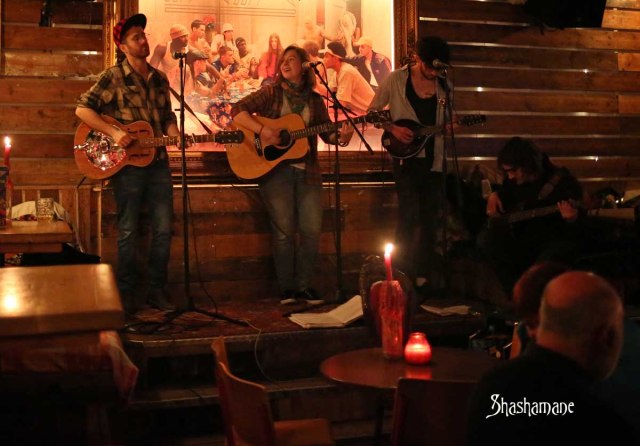 The crush barrier was back up for this gig though it was a gentle and amicable crowd of music lovers in attendance for this gig. Vodum had already started when I arrived and the place seemed well-attended. Vodum are a loud trio, all of whom look wild and covered in body paint.  Catching only a couple of songs or so I hadn’t quite tuned in enough yet to properly get into it but they gave my ears some preparation for what was to come.

There was a palpable sense of excitement and anticpation as the by now full auditorium waited for the band, and soon after 9pm Uncle Acid and the Deadbeats took to the stage to an intro tape and a warm welcome from the Norwich crowd.  The intro tape and the fantastic lighting gave a real sense of occasion to the gig, tonight had that same feel of a big event as another special gig here, The Besnard Lakes.  The lighting has been superb this year at NAC and it matched the spot-on sound as Uncle Acid played for around an hour and a half to an audience of bobbing heads in total unison. They are a mighty beast, huge riffs, bass and drums, plenty of fuzz and an overall sound that does owe something to Sabbath, who they have supported in the past, while retaining their own individuality. The audience lapped it up, the bar was empty except for the occasional top up and it showed what a thirst there is for this type of music in the city, how wonderful that it was held here. NAC was as much a star of the show as Uncle Acid, who were quite phenomenal.  Next visit is for The Vagaband’s annual Midwinter Moonshine on the 21st which has already sold out.

Uncle Acid and the Deadbeats

Uncle Acid and the Deadbeats

Saturday’s OosWolf at Cactus was a typically surreal and brilliant occasion with a strong line up that included Yve Mary B, Camille Davila with Pat Falgate, Joe Quinn (who played a short set before playing another at Gringo’s later), Eiyuze, and of course the inimitable Shane O’Linski himself.  There was a Bad Manners gig next door on the same night and some of their fans were having a drink at Cactus before and after, not all of them endeared themselves it must be said with a few not respecting someone else’s gig (bad manners indeed) but nothing was going to spoil the unique atmosphere of this gig and the way everyone played on unaffected and with love made me very proud of them.

I just knew that Camille and Yve would hit it off, they almost seem like kindred spirits. As Yve closed her set with a cover of Spanish Lady she invited Camille to join her for a refrain, which she did. This was the first time they had met! Beautiful.  Camille’s set with Pat was equally gorgeous, it was also a delight to see Yve sat on her knees absolutely rapt, with that childlike twinkle of wonder in her eyes that we love so much.  She even joined in for a bit of a waltz, and we had a charming rendition of Eye Spy which thanks to a typical Shane-ism will now forever be known as Ice Pie.

During the cover of Comfortably Numb there was an almighty crash as someone outside leaned against the door – which was not quite closed – and dramatically fell in.  Judging by the way he jumped back up unharmed one could only assume he was already comfortably numb 🙂

Eiyuze (Richard and Oskari) have been having a burst of gigging activity lately and are always good to catch. I know Camille was particularly impressed and excited by their sound. A bit of a Joy Division meets Neu! vibe was going on here.

The previous week I had another chance to see the delightful Hot Raisin, who were playing with Hello Bear in their occasional incarnation as the electric Raisins. They have obviously worked really hard to hone a perfect sound that is sensitive to the song’s subtleties which works an absolute treat. The power is still there but more sparingly used with the sound a little softer and restrained. I think it suits them very well and they all looked happy and relaxed but sounding tight. During two sets we had plenty of Hot Raisin favourites as well as some fun, well-chosen covers (These Boots are Made for Walkin’ sounding especially good) alongside my current favourite Whiskey Ginger, and a lot of songs having a distinct honky-tonk vibe in this new treatment.   I can’t wait to see them again and I love them to bits. 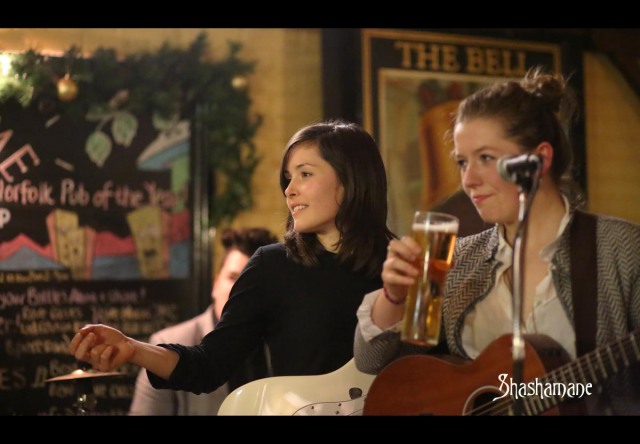 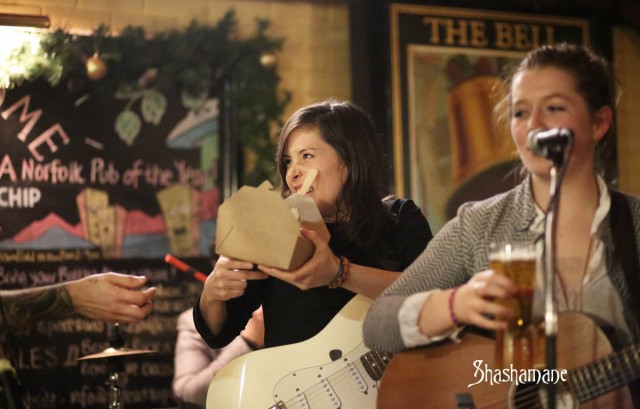