Even by Norwich standards this is a busy spell with a run of top quality gigs coming thick and fast, this being my sixth gig in five days. My head is still processing the fact that I have seen Acid Mothers Temple, and now Gnoomes, in my home city in the same week by Tuesday!

Pony Up in conjunction with Print to the People brought us three excellent bands plus Robe Terrestrial’s Eastern Bloc Disco in the bar for a bargain price and although the night was a bit under-attended those present were appreciative and enthusiastic so there was no lack of atmosphere. Jaztec opened the night and it was my first time seeing them. Their name quickly made sense with the beautiful and hypnotic electronica matched with some sax.  Ambient, drum and bass were both present too plus much gadget wizardry to bring a soothing, mellow quality to an enjoyable set.

Somehow this was also my first time seeing Collider, with sound genius Bill (wearing one of the best t-shirts ever) on guitar and vocals. The set was powerful, intense and always fascinating and the audience loved it. There’s a touch of Radiohead in there but masses of originality and experimentation. Very talented guys, I can’t believe it has taken me so long to see them but I am here at last and look forward to seeing them again soon.  Speaking to Bill afterwards I wanted to shake his hand in congratulation but he showed me his bloodied hand and wrist and said “best not”, the delivery of the set was that intense. My involuntary “Bloody hell!” was met with: “Yes!” 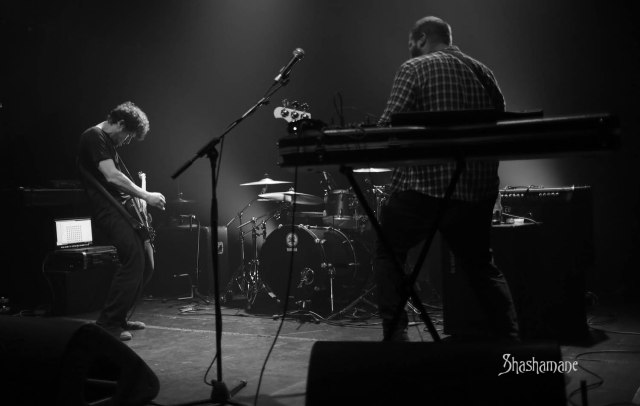 Gnoomes were rather unknown to me until I researched them ahead of this gig and I became somewhat fascinated with their rooftop video for the psych, and in their own words “stargazey” Roadhouse, and later was a bit surprised to learn they are in fact from Ural region of Russia. I was looking forward to seeing them onstage very much. Roadhouse is an epic beast over ten minutes of bass led grooves and soft melodic harmonies. A bit like the Stones Roses in their prime jamming with Spiritualized.

Powerful and hypnotic from the off, they were tight and psychedelic, exactly the band I would want to see following on from the Acid Mothers Temple high. Great guitar work, bass, synths and brilliant drumming with a krautrock vibe. The NAC has had wonderful lighting lately and this was the case tonight again and really enhanced the mood. The audience loved Gnoomes as well but it just felt that it was all over too soon though this is just greed on my part. There was a lot of excellent music on offer at NAC tonight and I have some vinyl which I am looking forward to listening to.

A top night of music, big thanks to Bill Vine, Pony Up, NAC, Gnoomes, Collider, Jaztec, and Robe Terrestrial. All such nice people too.

Even discovering later that someone had destroyed my bike basket was not enough to bring me down from my post-gig high. Stargaze magic.