Almost two years since their only previous visit to Norwich and the Arts Centre we were incredibly lucky to be able to welcome back the mighty Tinariwen.

On probably the hottest evening of the year there was a lovely vibe at NAC with all the doors open as Keith Slater warmed things up further with a Boiling Point Dj set as most people were milling around in the back garden.  I had a great chat here with a chap who recognised my shirt design, incredibly it appears we both had a shirt made from the same fabric from the same roadside shop in Kenya!  An hour or so chatting about Africa passed by very quickly.

At about 9pm Tinariwen took to the stage to warm applause and played for a good hour and a half or so, starting with some atmospheric vocal harmonies and then building that hypnotic, loping rhythm so evocative of the Saharan Desert. There’s so much subtlety in their music but it can also have that biting, militant edge with cutting guitars. The crowd adored them, not quite a sellout this time but close to capacity and competing with Belly at The Waterfront and also post-Latitude fatigue.

The sound and the playing was spot on, there were moments when I felt myself bordering on a trance-like state, especially on the songs with the repetition.  We witnessed some great dancing too, a bit like a dervish or a flame leaping from a fire responding to the energy from the audience like the air to breathe.  It looked like the band were enjoying themselves too but letting the music do the talking apart from the frequent good-natured “Everything good?  Everything OK?”  It is hypnotic, beautiful and paints soundscapes whilst the faster, more militant songs convey through feeling. Not speaking a word of Tamashek I can still feel the message of the songs.

As with their previous visit founder member and songwriter Ibrahim Ag Alhabib was not present in the touring line-up but the singing and guitar playing was shared by the rest of the band and they fully compensated for this. Tight, warm and totally mesmeric this gig was just as good as their last one which was one of my favourites. The encore was magnificent, with the slow acoustic build-up of Wartila before the energetic frenzied blowout of Chaghaybou which really had the audience going taking things to a plateau which I wish could have continued but they certainly ended on a high. I waited so long to see this band play live and now I have seen them twice in my beloved Norwich Arts Centre, this was one of only three UK dates on their tour so we really were very lucky to have them. Well done and thank you NAC.

The previous night I attended a lovely gig at a very warm and humid Bicycle Shop Handlebar for the first visit to the city from multi-talented singer-songwriter Lewis Barfoot as part of her Summer Sundays Tour, with support from our own Woodland Creatures.  Arriving early I was very charmed to catch Lewis, musician/actress/theatre maker/director/writer soundchecking and greeting me in song.  The Woodland Creatures in good humour delivered a typically enchanting set which Lewis rightly described as “exquisite” and all the audience were in agreement on this. Their 40-45 minute set passed all too quickly but we still had Lewis Barfoot to look forward to.  Starting her set with an a cappella number she penned in Jordan, her haunting vocals with a middle eastern seed pod as percussion shaker it set up a theme of songs written around the world, from places such as New Zealand, Ireland, Spain and Russia taking us on a musical journey.  It was a lovely set and Lewis’ personality shone through at all times, warm, witty, friendly and engaging she gave brief backgrounds to her songs’ stories which were fascinating dealing with a range of subjects including loss. Always inventive with some clever use of loops, especially on the beautiful Little Bird. A really charming, intimate evening which was warm in all senses as summer seemed to finally arrive. 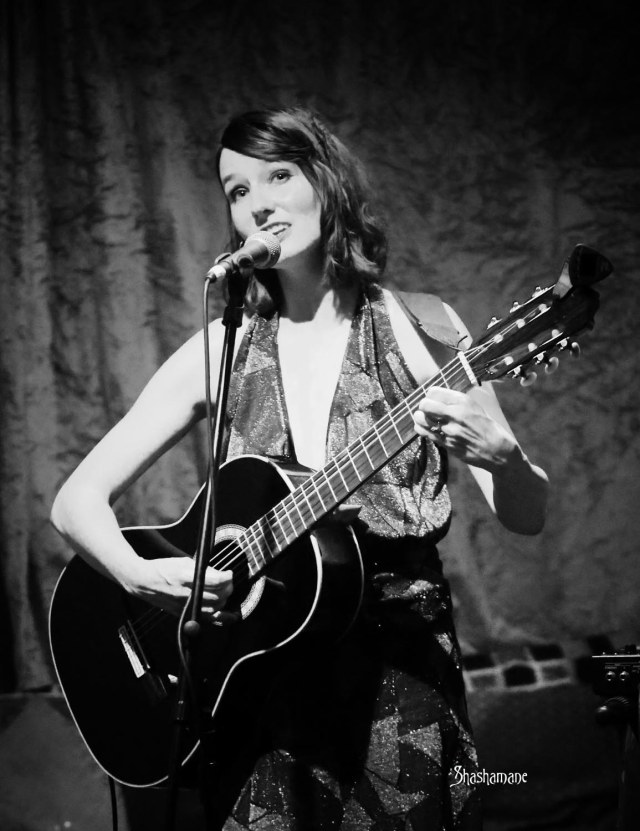 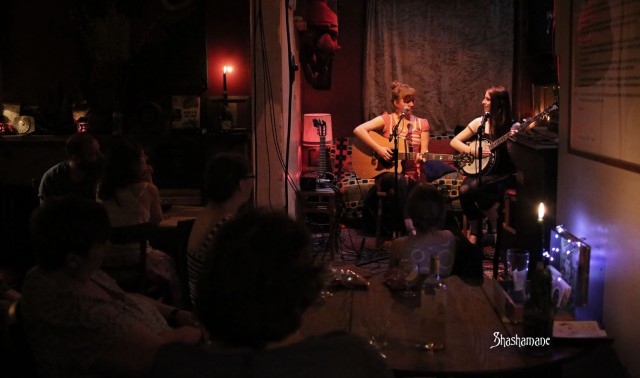 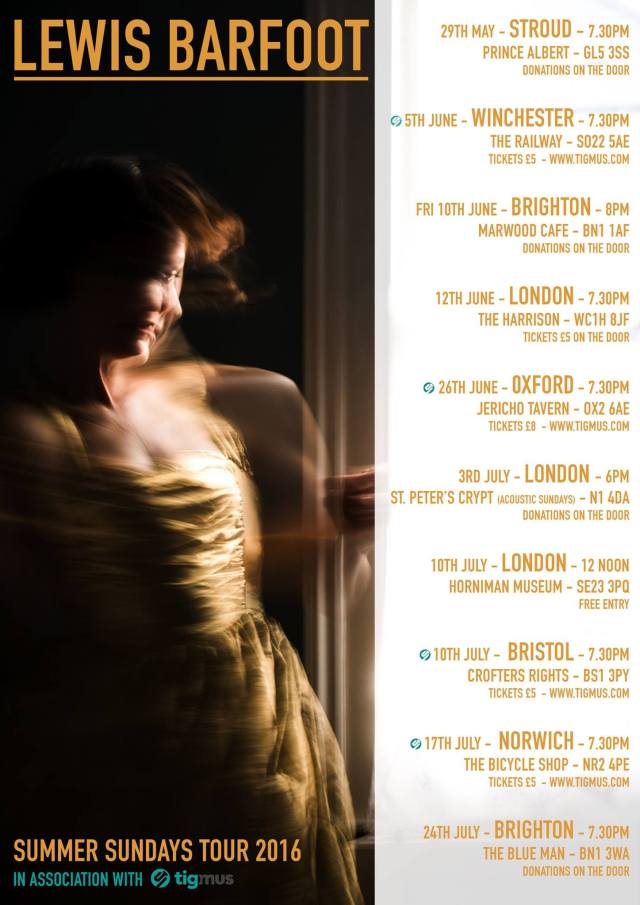