There was a lot of interest and anticipation for this gig, and it was quite a coup for the Arts Centre getting Mbongwana Star here.  They were of course formed by two of the founders of Staff Benda Bilili whom I saw at the Theatre Royal about five years ago as part of the Norfolk and Norwich Festival.  The only thing I found frustrating about that gig was that it was held at the Theatre Royal and I recall wishing so much it had been hosted by our beloved NAC instead. The band were terrific and there was the extraordinary sight of some of the band members sliding out of their wheelchairs to dance on the stage whilst ironically much of the audience felt trapped by their own seats in the theatre although plenty did find their way into the aisle to dance to their joyous music. No such problems at the Arts Centre though with an enthusiastic audience dancing throughout this amazing gig. 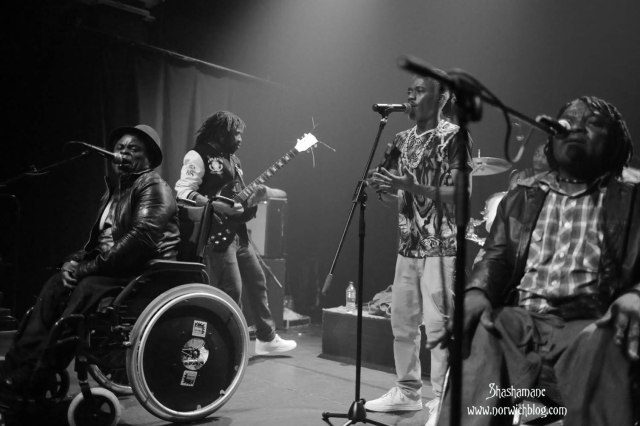 Support was from New Zealand’s Estère who came across really well and warmly in her introduction, with a charmingly hand-made sign of her name attached to her electrical kit. While her style of electro hip-hop music was not entirely my thing I did appreciate it and her theatrical delivery and judging by how full the room was for her set and the loud applause after each song it was clear she won many admirers.

Estère is a girl with an MPC she calls Lola. With Lola, Estère samples and records a mixture of bass, synth, drums, guitar, vocal harmonies, kazoo, cutlery drawers and anything else that tickles her fancy then layers the production with pulsating rhythms and evocative melodies that adhere to her own genre dubbed – Electric Blue Witch-Hop.

Onstage Estère is joined by a number of different mechanical personalities that she terms her ‘ machine band’. Together they create a unique high energy showcase of what happens when music mixes with the imagination.

Drawing inspiration from the evolution of reptiles, imaginary boyfriends and cultural identity amongst many other things, Estère delivers her songs with a voice that has been described as rich toned and elastic.

In October 2013 Estère embarked on the Red Bull Prodigy collaborative project with Washington D.C/ New York Producer Oddisee, which saw them spend two weeks together in a studio writing music. They subsequently released three songs: Flashlight, Curtains Down and Noon.

In April 2014 Estère released her debut self produced album via Bandcamp which was released in Europe the following year by French tastemaker label No Format. Off the back of her first ever European tour, Estère began 2015 playing at a variety of New Zealand’s largest music festivals and released her debut remix EP ‘New Species’ in October. After a succesful Australian tour in November 2015, Estère is currently in the process of writing her new album – set to be released sometime in 2016.

Around about 9pm there was a palpable sense of anticipation for Mbongwana Star and as they took to the stage a lot of people headed to the front. From Kinshasha in the Democratic Republic of Congo they sort of carry on where Staff Benda Bilili left off and build upon it with a much harder-edged sound. Founders Coco Ngabali and Theo Nzonza have formed a new band featuring splendid drums, percussion, guitar and bass, which surprised me a little as from a couple of the videos I checked out online beforehand I was half-expecting more of an electro element to their sound. As it turned out much of that sound was coming from some incredible guitar, after some initial howling feedback.

Most of the songs were well over six minutes and the energy throughout was astonishing, matched only by the relentless dancers from those at the front, and one can only assume from those further back too. The music was infectious and the vibe coming from the stage just so vibrant and alive. Théo in fact was often bouncing frenetically in his wheelchair, nothing was going to prevent him from dancing. Théo and Coco looked so cool in leather jackets and shades and the rest of the band shared their enthusiasm and energy, there was a great exchange of energy between those on stage and in the audience.

The tempo slowed occasionally but never for long and provided a good level of variety in the 90 minute set.  In Staff Benda Bilili Roger had constructed some kind of single stringed lute instrument fashioned from a coffee tin, occasionally that sound was mimicked by the guitar tonight, very high pitched in contrast to the deep bass grooves, quite a dance groove. The overall sound was very interesting, still obviously African but not  at all generically so, with some interesting influences and directions making them unique, different and not a band to be pigeonholed. It will be interesting to see what is to come from this band.

Such is Norwich at the moment that even on a Tuesday evening we had this gig AND The Neutrinos playing at OST at the same time, which I was sad to miss but couldn’t tear myself away from this great gig.

An absolutely lovely event taking place in the perfect Norwich venue with the right audience who had a blast, so too I think did Mbongwana Star. 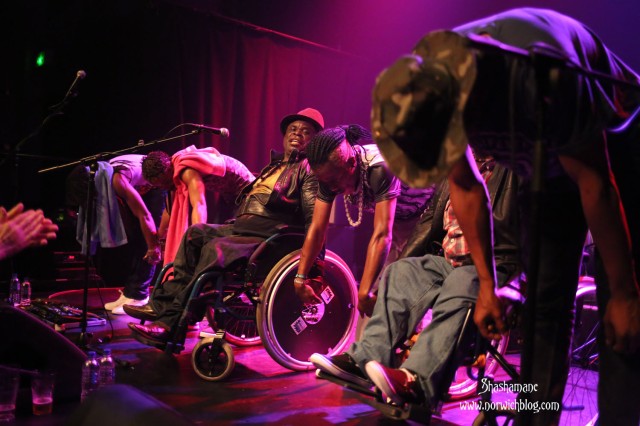 Many thanks to Norwich Arts Centre for this wonderful, joyous gig. I’ve seen so many great gigs here recently I am still mentally processing it all!