During the few days after learning of the tragic passing of Andy Sacre I busied myself with several gigs before the inevitable time of quiet reflection at home. One of the things that did help though was a wonderful gig at Norwich Arts Centre by Shonen Knife – celebrating their 35th anniversary! 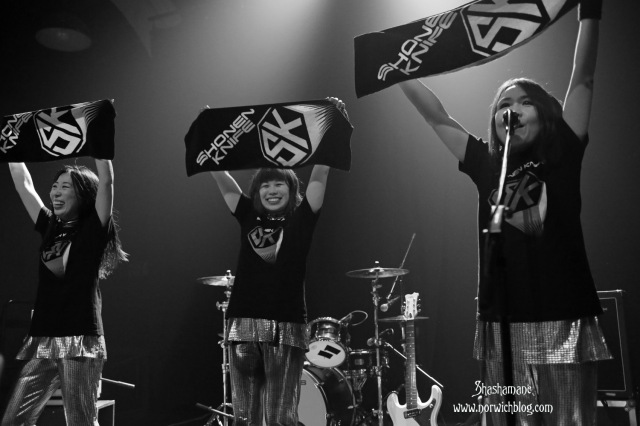 I had a pre-gig drink with friends at the Owl and Ohio’s Leggy had just started their set when I arrived at the Arts Centre, I was quite taken with them. Great attitude, riffs and a superb bassist.  Veronique, Kerstin, and Chris create a powerful melodic, grungy punk sound which is really infectious and fun.

Of course that is also what the legendary Shonen Knife deliver. Coming onstage in matching foil outfits holding aloft banner towels they played for just over an hour a set with great spirit and energy, their enjoyment matched and raised by the audience and so the energy transfer lifted levels on back and forth from both sides. It was an absolute delight. Killer hooks and riffs and fun all the way, just the tonic. I have rarely, if ever, seen such a queue for a merch stall afterwards where the band were on hand to sign albums and CDs.

The following afternoon was spent at a rammed Plasterers where The Vagaband played a couple of sets totalling well over a couple of hours. Their new songs sound fantastic and they even managed to slip in an unrehearsed (Ali was just back from Mexico and Jose just back from India) tribute version of Prince’s Purple Rain which brought the house down. 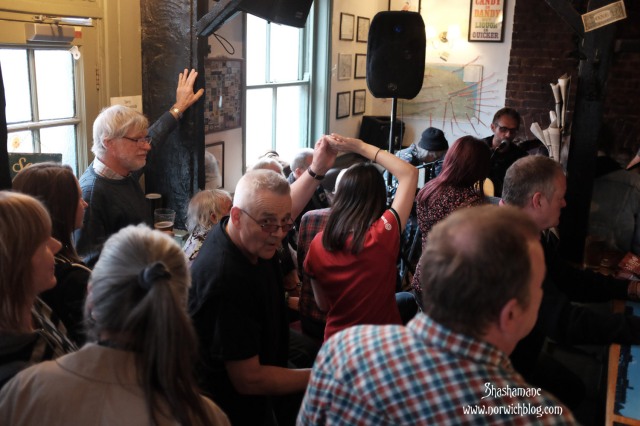 Dancing to The Vagaband at The Plasterers

Earlier in the week I also saw Milly Hirst playing support at a packed B2, before heading to Cactus Cafe Bar for OosWoolf which featured Phoebe Troup, Winter Visitors, Chad Mason, Thanks, amongst others.

The Plasterers too hosted a night of music featuring Epia, Sink Ya Teeth, and the extraordinary Soyuz Rats.

On the following Thursday there was a nice tribute to Andy at The Owl Sanctuary where Sean and Robyn collected as many Andy tracks as possible in a short space of time, sent in by friends, to host an evening of his music where his friends could gather and chat. Many thanks to Sean, Robyn and Dan at The Owl for this. I met lots of friends and some lovely people for the first time. Andy is still bringing people together. Thanks for the kind words and sympathy too Dan.

During this week Dave Thomas and his band also released a live CD, recorded at The Far Cat but launched at The Murderers for Fine City Blues. The portion of their set that I caught sounded sensational.