Jug Jaw’s Beat Club must be the coolest gig in town and goes from strength to strength with high demand  for this gig in the gorgeous Bedfords Crypt which looks even better now with the bar moved to a more logical angle and some beautiful lighting.  I arrived early to make sure I didn’t miss out and it was an impressive set up on the stage area that greeted my eyes. 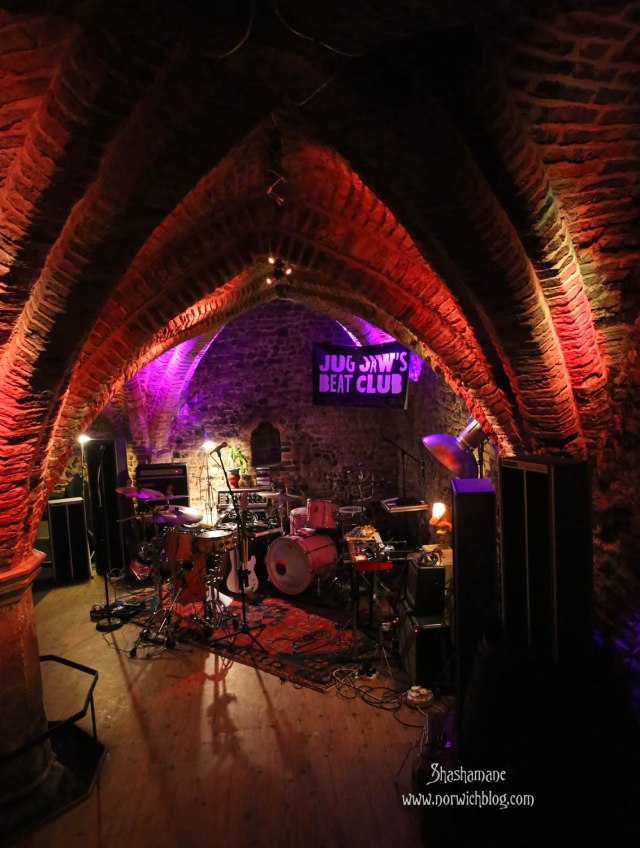 King Dinosaur kicked things off, a band I have only seen once before but memorably it was at a previous Jug Jaw’s night when they had the place absolutely rocking, so much so that two police officers asked to come downstairs and take a look investigating nothing but their curiosity at the lively music drifting onto the streets above from the undergound venue. They have a new bassist since that gig, with the coolest mod look he looked a perfect fit at Jug Jaw’s. An equally cool guitarist blasting out some massive riffs on his Gretsch guitar and a huge singer who also plays drums standing at the front of the stage … or rug. Their sound is big and so powerful through these vintage amps and speakers. Less rockabilly than I remember them from that last gig but sounding good.  A few people were still arriving while they were playing and that must have created such a strong impression if any of those people were coming to their first Jug Jaw’s night. 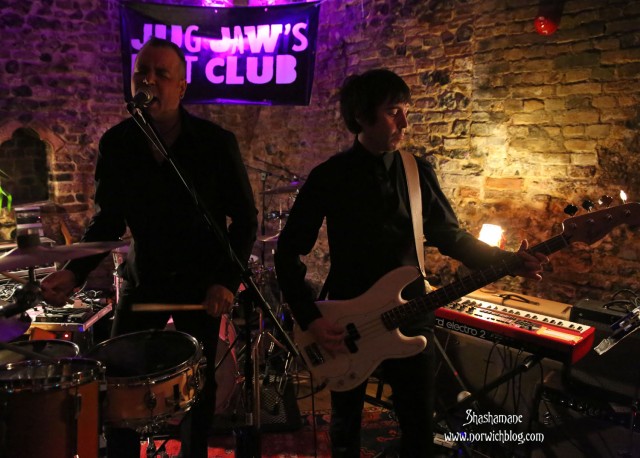 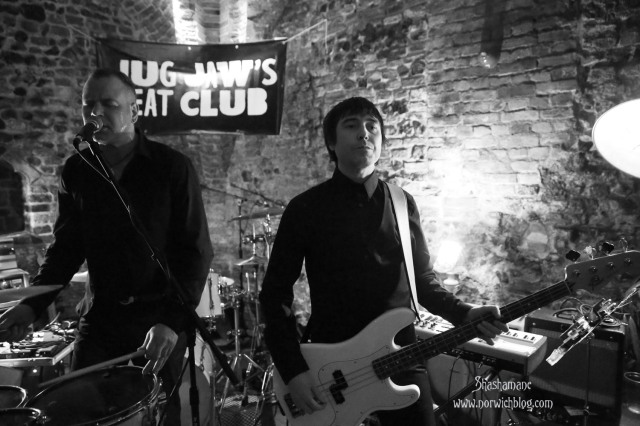 A quick turnover as King Dinosaur dismantled their gear and Joe Gideon’s band set up theirs. This in itself was fascinating as drummer Jim Sclavunos (Grinderman, Nick Cave & the Bad Seeds) appeared to have his wallet taped to his pink drum kit for reasons I wish I’d remembered to ask afterwards and Gris-de-Lin seemed to be surrounding herself with synth, a Nord piano with a toy-like glockenspiel on it, percussion, sax, guitar, and a skull-shaped shaker.

The instruments may not all be 1967 beat club vintage but the PA, amps and mics are and the sound from this band was phenomenal and highly atmospheric. I wasn’t really familiar with the songs at all before this gig but they blew me away. Joe’s storytelling vocals are captivating as he switches between guitar and grungy bass, Jim utterly compelling on drums and so is multi-instrumentalist Gris-de-Lin, one didn’t quite know where to look as it was almost as fascinating visually as it was aurally. The songs were varied, held together more by theme, mood and subject matter than tempo and the lyrics certainly warranted close attention but unfortunately a few pockets of chatterers were making themselves more and more audible not only to the rest of us listening but also to the band whose subtle remarks were lost on the culprits. It’s a shame because stories are being told, not just within the songs but in the set as a whole I felt, and songs like Eugene Went Crazy have their quiet Lou Reed-esque moments as it builds. A joke between Joe and Jim about the next song being appropriate for the occasion soon became obvious to those paying attention with its lines about yapping dogs.  I don’t know if these people just turned up because it’s the cool place to be or the dreaded bank holiday drinkers but they were annoyingly loud and I was quite concerned the band might finish their set early as a result. In the end I think it worked out, they just played louder and in any rate were trapped onstage as the venue was so packed they had nowhere to go so we did get a couple of songs in the encore, one of which was a cover of I Saw the Light. 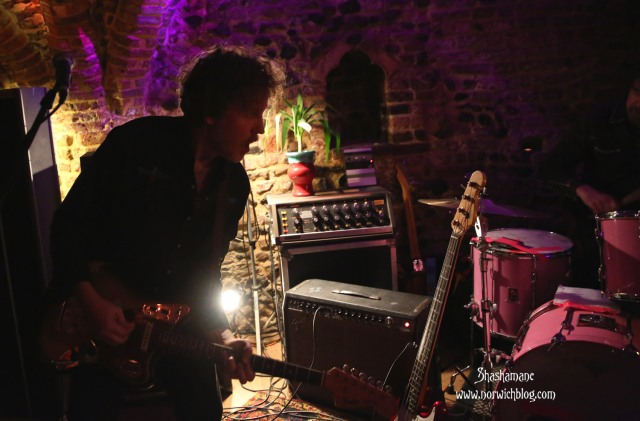 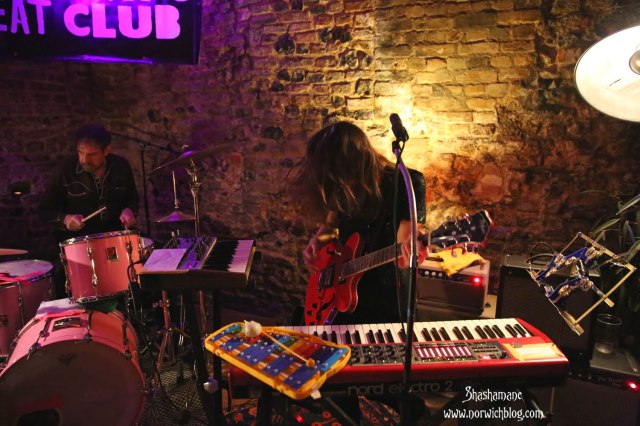 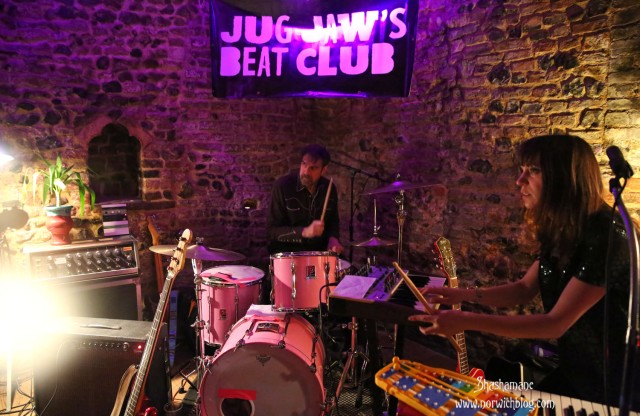 Praise the Lord! I Saw the Light! 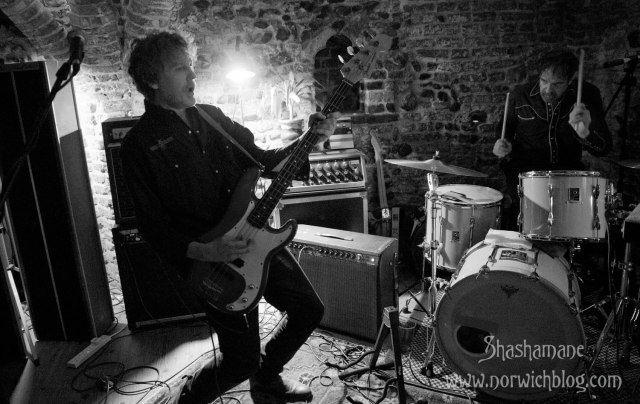 The album is every bit as memorable as the gig and powerful too with its running theme of a fragile grasp on sanity which remind me of Lou Reed, Nick Cave, Jim Morrison, and even Fad Gadget. 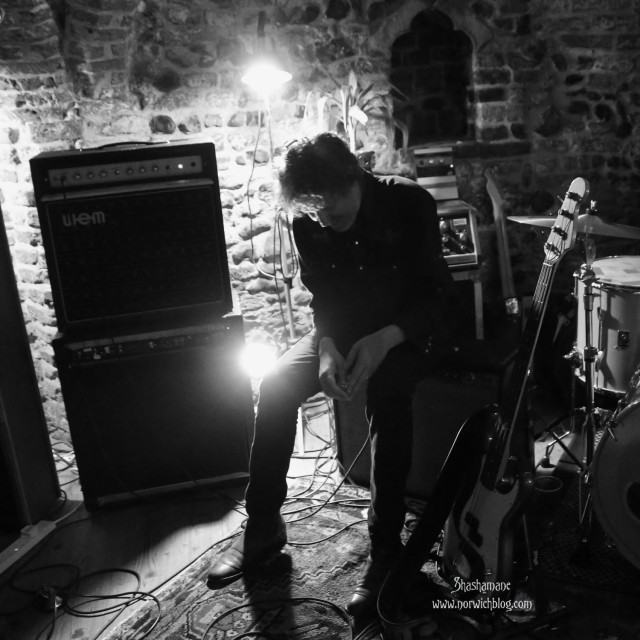 Joe Gideon a few moments after the Jug Jaw’s set.

I was really impressed by the band, the quality of the songs and the calibre of the playing, Gris-de-Lin was astonishing, some huge sparseness on her guitar and haunting backing vocals sent shivers. Absolutely brilliant and I had no hesitation in buying Versa Vice on vinyl afterwards, and also felt the need to apologise for the talkers but the band understood. A shame it happened though as it’s really quite un-Norwich and not the sort of thing that happens on these nights usually. Not Norwich Music City UK behaviour at all. Still, it’s their loss as they missed a gem. Anyway everyone near the front was digging it and it was still a superb night. Big thanks to Jug Jaw’s Beat Club and Punk Rock Blues for bringing Joe Gideon to Norwich and introducing me to his music, and Bedfords for hosting it, this was a real privilege to have this gig here.

With a few friends I headed to The Murderers afterwards in case Fine City Blues was still going on. As luck would have it it was and so was able to catch a good half hour or so. I was astonished to see Dove and Boweevil onstage with Ron Sayer Jr. & The Shunters as they had been stood beside me at Jug Jaw’s!  Lauren was in blistering form really letting rip. D&B play again tonight (Friday 25th) at Marzanos.