It must be over 30 years since I last saw John Lydon and PiL, in their last visit to the city at UEA. So magnificent was this performance that I think I shall remember this one better than my now hazy recollections of that 80s set, as good as that was too. There was no support act, we were warmed up with an excellent selection of ’70s heavyweight Jamaican dub before the band came onstage shortly after 8:30pm.

The current PiL line up is amongst the best and certainly compares with the legendary Wobble, Lydon and Levine line up. They are still writing and recording too, the new songs from the recent album though unfamiliar to me held up well alongside the older classics, of which I was delighted to hear Poptones, Death Disco, This is Not a Love Song, Rise, and a truly epic Religion which must have clocked close to 15 minutes with John repeating the mantra “Turn up the bass!” which the sound man did until the LCR and everyone’s clothing and internal organs were shaking. At some point from a previous event in the LCR some Rizla paper-like confetti must have been stuck on the lighting rig but the intensity and power of the bass shook that free so we had a surreal sprinkling of confetti. 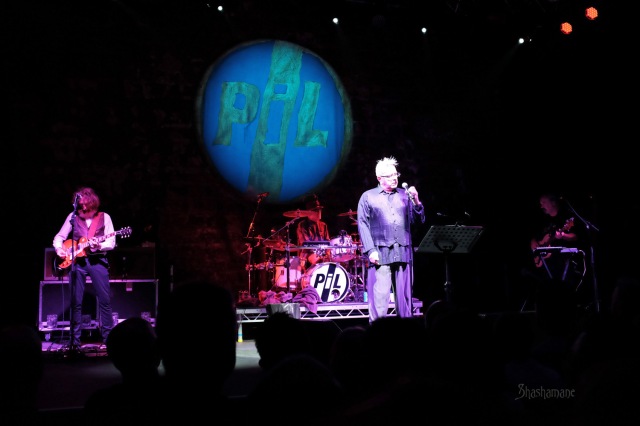 The encore consisted of Public Image, which brought a somewhat (by then) outbreak of pogoing and a singalong “Anger is an energy” on Rise. Earlier John remarked that we were a bit quiet but that he was taking that as appreciation. This was spot on, I think everyone here was fascinated and loving the gig.

Surprisingly not a sold out gig but feeling pretty close to full, everyone here was treated to a fine set. The band are a real unit and certainly not session men or backing band, that was clear, and John himself was on fine form, telling us he spent a winter at Bacton as a child which makes him something of a local! He made his feelings for stage invaders, and those demanding him to “Get on with it!” when he took to the stage for the encore very plain but overall he seemed in great humour and enjoying himself. At one point there was a shout from the crowd of “You’re better than ever, John!” to which he replied “I mature like a fine wine!” You wouldn’t expect any other response from him but in his case it is true. Still unique, original and creating without pandering to any trends or fashions and with that voice, still so strong and instantly identifiable. What I have always admired most about him is his bloody-minded individuality and path of creative originality.

A fine, fine gig. This is no out of time roadshow, they are a real band still active, creative and relevant. They played for close to two hours and it was compelling throughout.