The wonderful and welcoming Plasterers hosted the weekly Bare Feet Records night on Tuesday 7th April with a line up that included Lucy Gooch, Turf Club Racebook (who turned out to be the Barlights’ Graham Horne) and headliner, the superb Milly Hirst.

It was a real pleasure for me when Lucy Gooch approached me to say ‘Hi’ and have a chat, as it’s been a while since I first heard her (impressively at another BFR night at Gonzo’s)

She played well and was captivating that night, and was again this evening, opening the music with a low key gentle ambient instrumental set, the chiming guitar again reminding me of The Cocteau Twins and This Mortal Coil. It makes me very interested of her influences and where and how she heard such bands who I too was a fan of but was exposed to them way back in the distant 1980s! Her music was a lovely way of opening the evening, like gently setting sail into a musical dream. Lucy is incredibly humble and modest, and needlessly apologetic too but I loved her set and her charming company. She was excited to be hearing Milly too, having only heard her performing live previously with Wooden Arms.

The mysteriously named Turf Club Racebook was next but I immediately recognised the chap setting up as Graham Horne. I’ve seen him several times doing solo sets lately (Jug Jaw’s Beat Club, Grazing Saints album launch … et al.) but I think this was possibly the most enjoyable of all. Playing acoustically his playing was impressive as was his singing and songwriting which were more to the fore as a result.

The marvellous Milly Hirst – also too modest for her incredible talent – seems to be the one artist who always takes me to some other plane. Whatever noises of glasses or chatter may be going on around me I am only hearing – and crucially, feeling – every word of every line of every song. She’s one of our most gifted and talented songwriters with the most beautiful and amazing voice, which she uses so well. The songs and the words and the mood just hit me every time. It’s the gift of a true artist to be able to convey feeling so emotionally, intensely and viscerally. The power of her live performances (and indeed recorded ones) just never lessen no matter how many times I see and hear her play, I felt it the very first time I heard her and I still do. Tonight she played Rose, a song not played as often as it once was, sung this time experimentally in a higher key which added another dimension to its emotive impact, and finishing the set with the glorious Mary. Always a “goosebumps” moment when I hear this one. 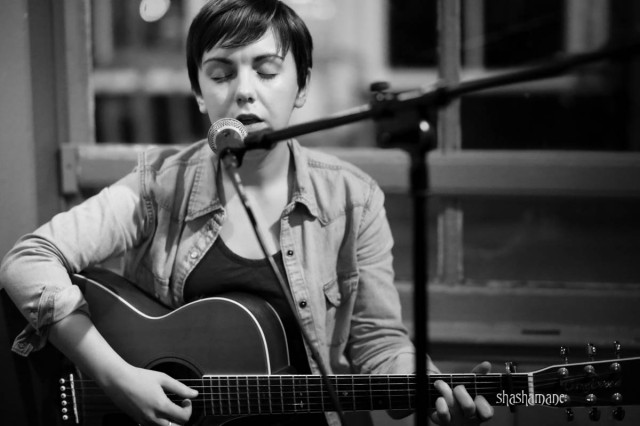 Chatting again with Lucy afterwards, she was saying how much she loved hearing this set and we found ourselves agreeing with everything each of us was saying. Milly should be a star but to us she already is.

Milly, Lucy and myself were all laughing at how the incredible Alex Carson is still able to keep his finger on the Norwich musical pulse and still put on two or three Norwich gigs a week from his new home in London and remain such a central figure of the Norwich music community despite no longer living here. The man is a genius!

On Easter Sunday BFR had a good line up for a musical all-dayer, headlined by Grifter Kid and the Midnight Raiders, and Emily Winng – the only two acts I saw.

With full band featuring partner Ben on drums, Iain Lowery on guitar, and Tin Man on bass they made a big sound and a big impression but really worked for it in a noisily odd atmosphere. As Emily played though I did truly appreciate her ad-libbed and well-placed “SHHHHHHhhhhhhhhhhh!!!” mid-song, which did actually seem to do the trick! She’s a sassy and ballsy performer and the reaction from those listening was overwhelmingly positive. Everyone I spoke to absolutely adored her. The band were great. Despite everything this was a really enjoyable set, triumphant in fact as it got rid of one of the noisy people, or at least quietened them.

Grifter Kid and the Midnight Raiders are another band I truly adore, and was in fact seeing them in this venue for the second time but I have to say they deserve a decent PA, sound and an attentive audience – though those of us listening loved them and appreciated them. The first song was somewhat swamped and lost in the mix by the guitar and the band could not hear themselves … the sound was thankfully resolved to a point fairly soon into the set but these are people who play with much subtlety and words which need to be heard, it’s a shame that they had no monitors available to them to hear themselves but it was an enjoyable set nonetheless with sumptuous bass and backing vocals along with the lead, guitar, sax and clarinet. This is a band of very talented people who I have the utmost respect and time for, I look forward to repeated return visits from them to the fine city but preferably in better-suited venues … I would suggest Grapevine at Bedfords or The Bicycle Shop.

A curious venue, Gonzo’s is not without its merits and some good people, it is unusual, distinctive and unique but it is becoming one of my less favoured live music venues, largely through being cold and unappreciative of those paying for its existence, or at least giving that impression. Making customers feel so uncool they are lucky to be served at all, even at £5 a pint is not what I look for in a bar. The casually indifferent “cool” attitude is what I find so disappointing and makes me feel lacking in enthusiasm for gigs here. I can only be honest and say that personally, I felt much more relaxed, comfortable and happy when these live music events were held at the Birdcage which in my humble opinion is much better suited to live music.

The music finishing relatively early I popped into Bedfords on my way back to wish the owner, Glen, a belated Happy Birthday. The place was rammed in celebration for him, and his son Johnny (a year after the tragic car-crash in which he survived but his dear friend did not). It felt so warm and welcoming here. The contrast in atmosphere, welcome, and enjoyment could not have been more marked. I really needed this and thank Bedfords for making me feel like a human again.