The latest Jug Jaw’s from Chris and Steph was another brilliant night in a series of these Beat Club nights which are becoming legendary. With all the pa equipment, lighting and decor being vintage 1960s, and house band Lank Smith and the Pythons alone being enough to bring me along, there is also always the bonus of the hand picked artists who always seem to enjoy playing here. Tonight the music was opened by Graham Horne of The Barlights playing solo, who undeterred by some technical issues with his guitar played an engaging set, with a new number written for the occasion going down especially well.

The energy of Lank Smith and the Pythons is just breathtaking. Sounding raw, electric, visceral and powerful it is an absolute delight to hear them play with such relish and enthusiasm. They get the whole place moving with their renditions of classics like Too Much Monkey Business, Gimme Some Lovin’, and What’chya Gonna Do About It which fulfils the intention of recreating that feeling of hearing these songs from that era how they would have sounded. There’s just an edge to hearing them through this equipment that is somehow more exciting, much more in fact. Absolutely fantastic and well worth seeing them every time.

Lank Smith and the Pythons 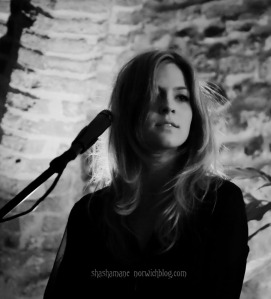 They must surely be a hard act to follow but the mysterious Bleaky and the Meerkatz managed this. They are apparently Norfolk rockabilly legends but somehow have passed under my radar all these years. From the first notes of Folsom Prison Blues they had everyone on their side with an incredible sound as they belted out classic after classic. Mainly rock classics from the likes of Them and The Sonics but also a not at all out of place Teenage Kicks. They were incredible and at one point we even had the rare sight of a couple of police officers come down the stairs to check out the music out of sheer innocent curiosity. Lovely moment!

Sadly the rock photos, cuttings and pictures on the steps down to the Crypt have had to be removed as they were a fire risk, they did give the venue an iconic rock venue feel, but tonight that was all provided by the music and atmosphere in this terrific venue. I think this was one of the best Jug Jaw’s so far, and that’s really saying something as they have set the bar very high indeed. Tonight it really did feel as though we were taken back through the rock and roll ages and it was glorious. People dancing in every inch of the venue. A special night.

Many thanks to Chris and Steph of Jug Jaw’s Beat Club, and Bedfords Bar and restaurant.