What a most marvellous night this is at Bedfords Crypt! Jug Jaw’s Beat Club attempts to recreate – in every detail possible – the Beat clubs of the 1960s and even the birth of rock ‘n’ roll. Chris and Steph, whose venture this is, have succeeded admirably, and their choice of venue is perfect, as not only is Bedfords Crypt a gorgeous venue in itself but it has a good history of hosting Beat clubs in the 60s (after the owner at that time discovered the Crypt when some flooring gave way and he literally fell into it!)

We experience the sound through Shure speaker systems and valve amplifiers via vintage microphones, and the music coming through is brilliant. Arriving just after 8pm I found the venue to be almost packed out already (bear in mind this is a Wednesday night and there is also a swing night taking place at ‘Cuba’ on the same evening – Norwich comes out in force for music.) The songs being played are classics from the sixties and before long Chris and Steph take to the stage with the house band Lank Smith & the Pythons (of course featuring members of Kill it Kid and Hello Bear). They play a set of 60s songs and rockabilly covers and from the first guitar chords I feel goosebumps and find it genuinely exciting. This is the first time I have ever experienced and felt what it must have been like to hear live rock and beat music at its inception and early days. It is thrilling, mesmerising, powerful and really very, very exciting. Of course all the genuine equipment will heighten that effect but it still needs the musicians to carry it off and what a band they are who do this easily. All great musicians, with some superb voices, playing with sheer joy and energy. I have never enjoyed a set predominantly of covers more than I enjoyed this, simply stunning. Chris makes the introductions while the band blast out the chords of Rumble by Link Wray before launching into Gimme Some Lovin’ by the Spencer Davis Group. Awesome stuff.

After a short break to set up and re-arrange the stage, a few moments of silence was called for as Das Fenster & the Alibis were about to arrive and pay their respects to the Voodoo Shrine. They all bowed and singer/guitarist Das Fenster gave the shrine an offering of his own fresh blood. Looking mean and moody, Pearly Gates was pawing and swivelling the upright bass, whilst drummer Stagger Lee, looking like he has taken yet another hefty blow to the face was pounding away with Timmy the Fixer in close attendance. The audience loved this dark rockabilly with a Lynchian twist. Theatrical, moody and charismatic. They played, wrapped us in a voodoo spell, they made us sing and then they were gone. Shortly after I overheard some new arrivals nearby discovering they had missed them and were absolutely gutted, but this band appear out of nowhere, strike in the night and then they are gone. 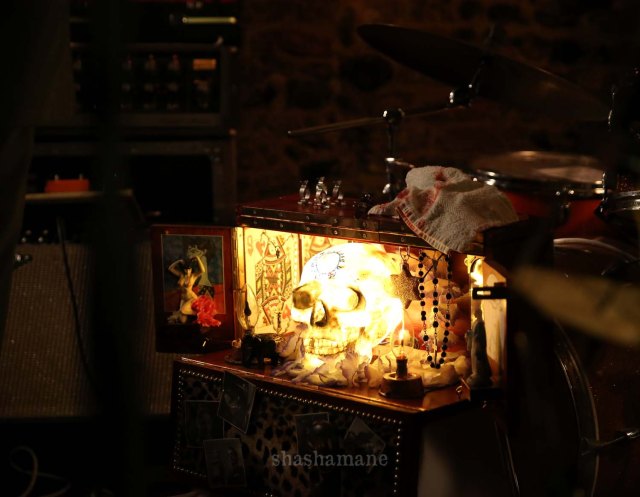 Blood on the voodoo shrine 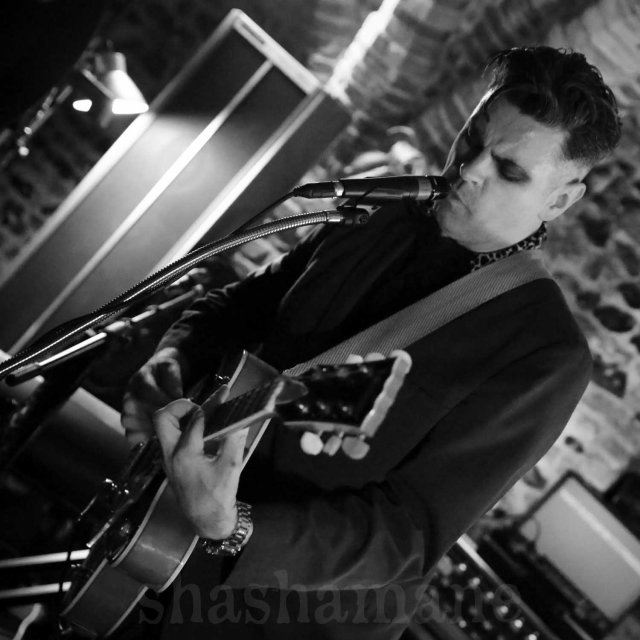 Before the finale was a late addition to the bill, a local doowop, Appalachian folk ensemble performing Sh-Boom, Sh-Boom, and Blueberry Hill, much to the audience’s joy.

Headliners, Norfolk rockabilly act King Dinosaur were superb. Their bassist, on upright bass, seemed such a character, carrying, swivelling, dancing with, and standing on his bass whilst performing, with fellow singers on guitar and drums making a brilliant sound for a trio. Playing covers from Sun studios, Johnny Cash, and more, they were the perfect end for a truly fantastic night. These guys are good! 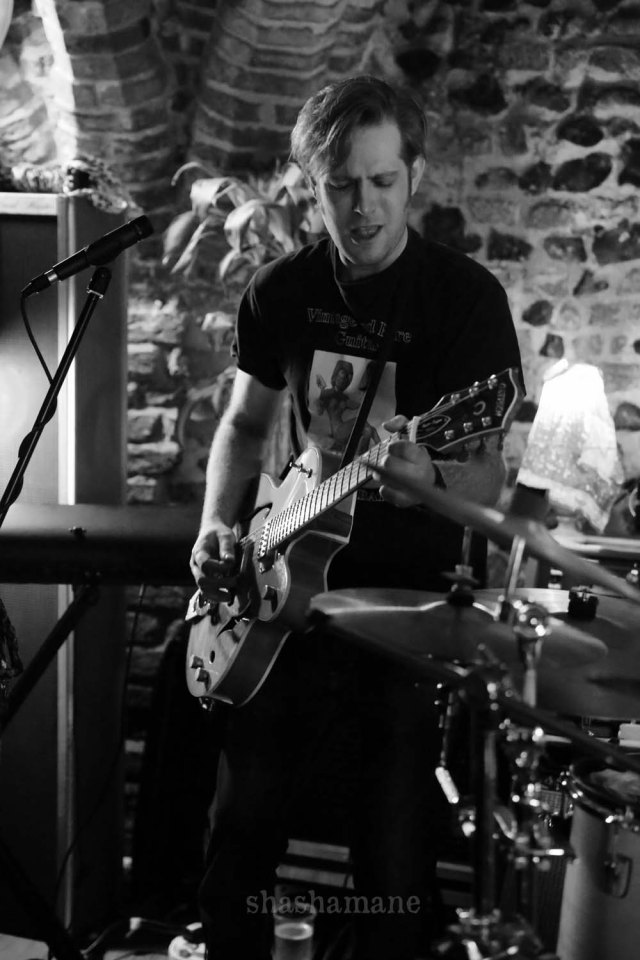 I was unable to make the first Jug Jaw night last month but will do all I can to make sure I don’t miss it again. Another one happening soon, arrive early and don’t miss out, these nights are special and particularly highly recommended for fans of the likes of the also amazing Bo Nanafana, I gather that Jug Jaw’s Beat Club is the only venture in the UK doing anything like this with vintage equipment. Good on them! These nights can run in perfect harmony and add more feathers in the cap for Norwich.

Many thanks to all the performers, Chris and Steph, Bedfords Crypt and all the Bedfords staff. This evening was one of those special nights that made me feel so young and experience that joy and excitement of hearing good music. Sometimes I get a real buzz from great gigs, and I certainly did from this one. 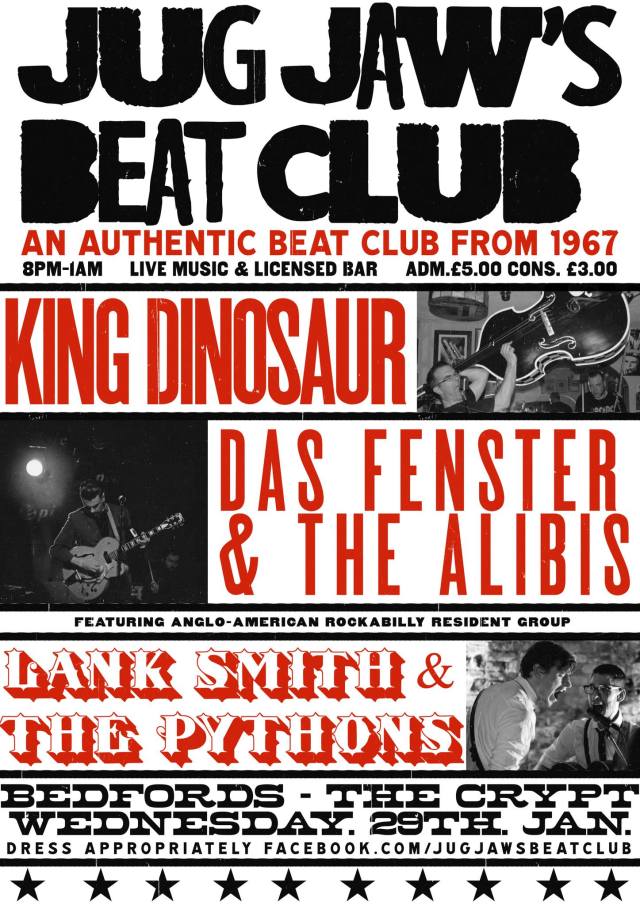 We’d like to begin by showing our appreciation to all that attended Jug Jaw’s opening night. It was a rip roaring success and we thank you all for your participation and filling the place to the rafters! The acts where fantastic and you were beautiful.

Now it’s round two. Please save this date:

On January 29th in the bowels of Bedfords Crypt, an incredible 13th century basement Crypt (only rediscovered in 1965 when the owner fell through a bricked up doorway!) we have for you an all star lineup of the East’s most prominent, authentic, true blood rock n’ rollers.

Placing them in a hedonistic beat environment as it would have been in 1967, every detail will be catered for. Cutting edge technology in the form of a ‘Shure Vocal Master Announcement system’ from 1967 will amplify our singers, accompanied by real tape echo units and spring reverb tanks. The stage will be completed with an array of the rarest vintage valve amplifiers, a gold sparkle Del Rey drum set, column speakers, stage lights, persian rugs and beat decor. A truly unique experience.

First on we have resident anglo-american house band LANK SMITH & THE PYTHONS. Making their stage debut at Jug Jaw’s grand opening the band consists of members of internationally acclaimed KILL IT KID and sad-core-fun-pop troubadours HELLO BEAR. They will host the night performing a selection of hit parade and garage rarities to get you moving.

Second on we are thrilled to announce DAS FENSTER & THE ALIBIS. Fronted by the infamous Paul Finlay, the shamanic presence of this trio is something to behold. Armed with songs torn from the black pages of the great American songbook, they will drag you into a dark theatrical world of their making….the question is…will they be bringing their shrine? They are refined rock n’rollers with a dark twist. Not to be missed.

Lastly we have the critically acclaimed KING DINOSAUR. Come and see first hand the deftly honed skills of a veteran Rockabilly act, showcasing the time honoured traditions of pedigree rock n’ roll. You will witness double bass acrobatics as you are unlikely to see anywhere else. They will have you hollering.