This was an absolutely gorgeous and intimate gig with some of the smoothest vocals and playing that you could wish to hear, from both acts.

Opening the evening was the delightful and marvellous Raevennan Husbandes playing tonight with Simon Lewis, cellist with The Exiles who would follow later. The beautiful and candle-lit venue of The Bicycle Shop and the addition of cello suited Raevennan’s sound just perfectly, although wherever and whenever I have seen and heard her play I have marvelled at her voice, guitar playing and songs. Tonight with her easy manner she chatted with us in her so likeable manner and held all those listening (everyone present) transfixed – a totally attentive and charmed audience enjoyed every moment. It will be interesting to see if she includes a cello again, I think the combination was just perfect.

Tonight was to be my first introduction to Adrian Roye and the Exiles, an act from London I had not heard before. Blessed with the same easy-going affability that he shares with Raevennan, Adrian introduced himself and the band and then proceeded to play some sumptuous and melodic material that is not that easy to pigeonhole. The band features Adrian on guitar, Simon on cello, Dan Paton on drums and Beth Dariti on bass, Beth sporting a magnificent Ethiopian scarf which I had suspected was from this beautiful country and Adrian confirmed this when introducing the band. Adrian’s voice is so smooth and expressive and they all play with that apparent ease which is always such a thrill to watch from such talented musicians. The same applies to Raevennan, who after a couple of numbers joined the band onstage to play some gorgeous dobro. The band themselves describe their music as “Afro-folk” which seems as good a description as any, but as their bio states, their influences are wide and varied and the soulful blend created is delicious and irresistible. A lovely, lovely gig. 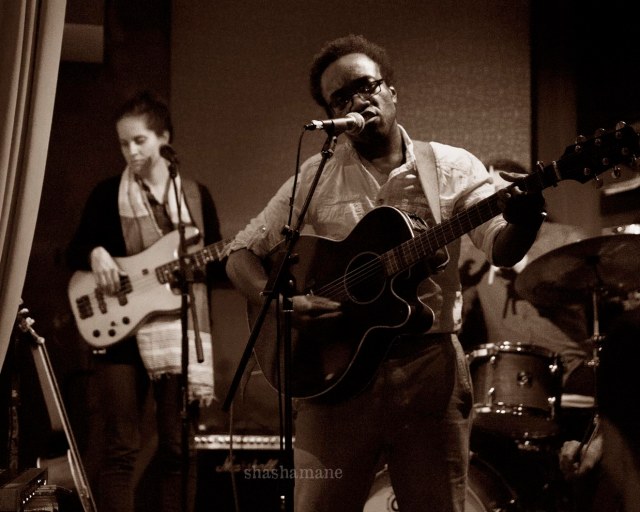 Biography
The genesis of Adrian Roye & the Exiles’ debut album dates back to a January night at the 12 Bar in London in 2011. The band were opening for one of their favourite producers, Michael Chorney, who had recently received widespread acclaim for his arrangement of Anais Mitchell’s Hadestown, featuring Justin Vernon of Bon Iver and Ani DiFranco. Chorney was so taken with the band that in the middle of their set he invited them to record with him in Vermont. It was an offer too good to turn down. Six months of preparation later, on July 4th, the Exiles arrived at the Goose Coop, Chorney’s secluded Vermont studio. For the next week, surrounded by the lush forests of the Green Mountains, Adrian and co laid down the ten songs which together form their debut album, Reclaimed, due for release Spring 2013.

It seems befitting that a band called the Exiles should record their debut album outside of their home country. The name came about because for a long time the band felt as if they were ploughing a musical furrow that left them somewhat unclassifiable. But then in passing a friend dubbed their music ‘afro-folk’ and the term stuck. It encapsulated the musical influences that thread through the Exiles’ music – a combination of folk and afro-inspired roots music, with hints of highlife, country, calypso, jazz and funk. Adrian’s richly emotive vocals and guitar lie at the heart of the band’s sound, in a style reminiscent of singer-songwriters like Tracy Chapman, Joan Armatrading and Ray LaMontagne. Added to this are the warmth of Beth Dariti’s dextrous bass playing, the jazz-inflected rhythms of Dan Paton’s drumming and Simon Lewis’ richly harmonic cello and highlife guitar riffs.

‘Afro-Folk’ as a concept has given birth to a series of gigs under the same name, the Afro Folk Sessions. Adrian Roye & the Exiles host each evening and invite the band’s favourite artists to play alongside them, all of who play music in a similar vein. Previous guests have included Ayanna Witter-Johnson, Fiona Bevan, Kimberly Anne and Modeste Hugues. The results have been captivating. As one reviewer has put it: “This is music with soul, beauty and passion in vast quantities…You need to go to an Afro-Folk session…you will come out feeling more alive.”
Description
‘The variety of styles and the quality of the songs is absolutely terrific…All through the set I was hearing influences – Ben Harper, Stevie Wonder, folk, jazz, funk and reggae all find their way in to the music but there is no sense that they are copying – this is all original and as a songwriter Roye has huge potential…Adrian Roye and The Exiles are a real jewel in the North London firmament and they seem to be building a following by simply being very good, very charismatic and actually loving their music.’ Andy Snipper, music-news.com, July 2010