Having somewhat unexpectedly found myself on that side of the city late Sunday afternoon I thought I would pop in to the Plasterers for some blues and hopefully see some friends there.

Arriving during the interval between two sets I was told by one person at the bar how awesome the blues being played here was, and also how photogenic it was with the setting sun’s rays pouring through the low windows.

Mark Howes (Dove and Boweevil) and local blues legend Dave Thomas put on a beautiful, chilled and relaxed show of mellow blues until shortly after 9pm (they started at 6.30) Clearly both of them were having a great time, constantly smiling and exchanging handshakes after each song, which was really appreciated by a lovely and happy crowd of people in a truly wonderful pub which along with a vast array of ales at nice prices, they also have Redwells premium lager and IPA on tap.

Dove and Boweevil are plagued by errors in listings pages calling them ‘Dave’ and Boweevil, but on this occasion it was accurate.

I did pop in very briefly to the Wildman to catch a bit of Mojo Preachers but I’d been so chilled by the Plasterers blues vibe that the atmosphere outside karma which although good natured seemed rather lively and different from the Plasterers relaxed mood – it was too much contrast, and I made the mistake of sitting at a table near the stairs, where the smell of detergents and disinfectants was so overpowering that I lost the appetite for my beer and didn’t feel relaxed enough to stay for long. The band however were faultless, playing sound, powerful blues. Although the name had for some reason slipped from my memory, upon seeing and hearing them I realised I had indeed seen them before, notably at a gig at Fat Cat Brewery Tap with Dove and Boweevil. They played pleasing blues really well, but I was finally defeated by tiredness and the overly strong smell of detergents wafting around the bar from the stairs. 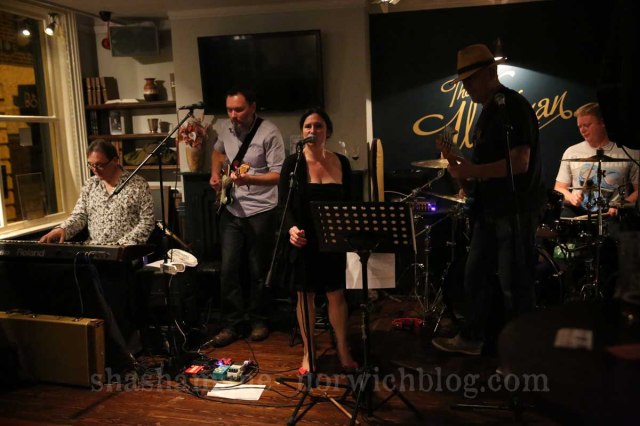 On Bank Holiday Monday afternoon, in glorious sunshine, it was time for the annual Norwich duck race to start. All lined up in the river Wensum under the Blackfriar’s bridge between the Playhouse and NUA, it was clear the strong breeze was going to present a slight problem as it was counter to the river flow. Gathered within a rope between two canoes, they were all going to have to be towed up to the finish line. Unleashed just before the Fye bridge finish between the Ribs of Beef and The Mischief, the ducks remained reluctant to cross the finishing line. At this point a rogue duck was thrown from the crowds at the aptly named Mischief into the water just in front of the finish. Howls of outrage from my side of the river at this, and rumours were that it was a rugby club duck. One can only imagine the controversy had this duck won. As it was, it sped into reverse and charged the wrong way up the river faster than any of the other ducks. At about this point frustration was clearly getting the better of the officials and once again the ducks were gathered within the ropes between two boats which rowed rapidly towards the bridge. This pace was too much for the ducks and the rope lifted above them and scattered them everywhere, quite a few I am sad to report had even keeled over and were upturned. People from the punting boats tried helpfully to rescue and throw them back into contention and the right direction but by now it was total chaos and pandemonium with Disco Duck and Darth Duck flying through the air unceremoniously, and ducks splashing everywhere. I am not quite sure what sort of stewards’ enquiry decided the winner in all of this confusion, and there was much speculation near the Ribs of Beef as to whether anyone actually reach the finish line at all, but it was a suitably mad end to a truly bonkers Norwich event on a lovely day.

there was so much optimism before the race … 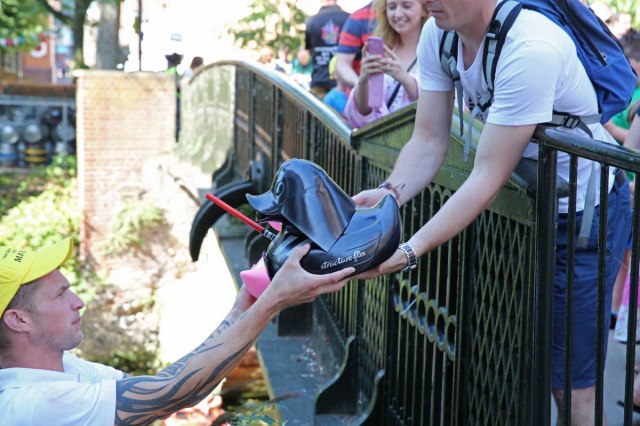 ducks being towed to the finish line 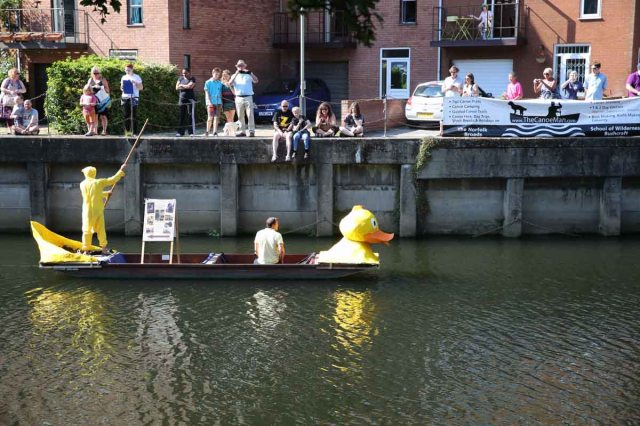 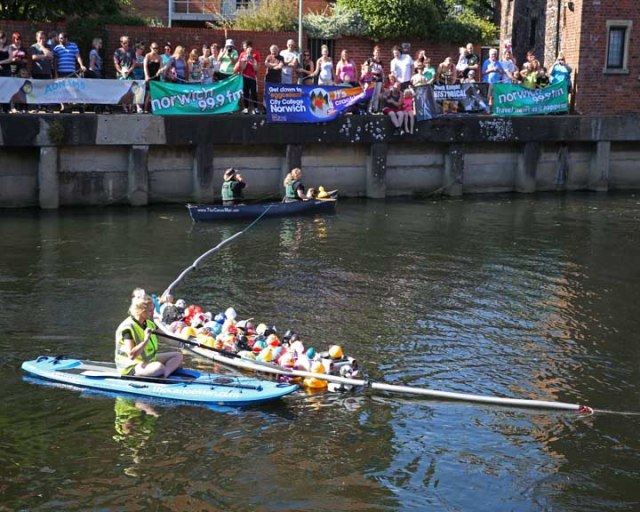 The annual Norwich duck race descended into farce, chaos and controversy today, when with a breeze stronger than the riverflow, and in the opposite direction, the ducks had to be towed to the finish line, but they still all showed a strange reluctance to cross the line, until an unscrupulous duck jumped into the river near the finishing line, at which point total pandemonium ensued.