I had considered catching an hour or so at Lights Out before this gig, but fatigue and what felt like the return of my cold meant it was a bit of a struggle even to make this 9pm start for OST but the lure of hearing and seeing Raevennan Husbandes again was too much to resist.

First on the bill though was Dan Foden, playing a solo set. Apparently Dan usually fronts Norwich band The Deadbeats, who I have yet to see perform. Tonight he was accompanied just by his piano. An interesting set, including a song or two from a project of songs with a run time of one minute. He has a good voice and my personal favourite was the song he closed the set with, which he introduced as a track he had only written and composed some four hours earlier. 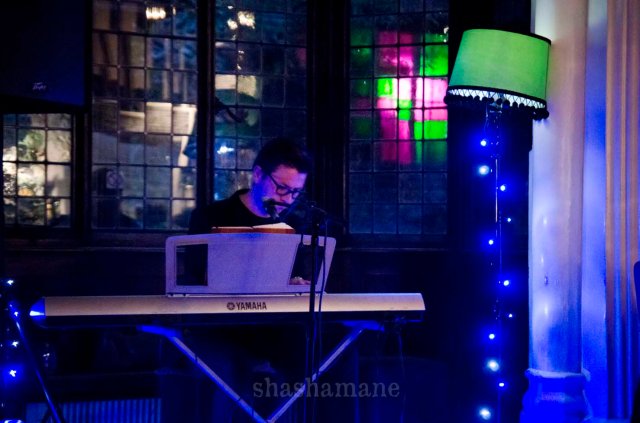 The next act was Oliver Rudge, from Wolverhampton. He started his set with some blistering guitar work and held the attention of all present. His singing style changed several times throughout, and I was less keen when it strayed into high Ed Sheeran territory and at those times I was more impressed with his guitar style than his vocals, but when he sang in his own style was much better. He seemed humble and unassuming, thanked the audience whom he described as the most attentive he had played to.

Of course the night’s headliner was the unmistakable Raevennan Husbandes. She had actually been sat at the end of the same table as me all evening so I was aware of how much she was watching and supporting the other acts on the night, which was nice to see. She eased gently into a beautiful set, with her sumptuous voice, easy style and gorgeous guitar work. Every song was just a musical caress, and her manner of speaking between songs was just deliciously charming and pleasant, for that alone one would fall for her charms but with her amazing songs it is hard to see how she will not go onto greater things. She talked easily when introducing a song that was the first she wrote after a serious illness that had left her temporarily blind and deaf, which must have been unimaginably traumatic. At another stage she mentioned that the previous night she had played a private members’ club in London, and spotted in the audience Zoe Wannamaker, “The one in Harry Potter who teaches people how to drive brooms” As I said, deliciously charming and self-effacing, a cheerful and eminently likable personality, with big hair and an even bigger talent. If you get a chance to hear her play do not miss it, I noticed many local musicians in the audience tonight to witness this event. I was delighted when she announced she has a CD coming out this summer.