Many thanks once again for another fine review from FallGuy, of this excellent sounding evening, and Viking Queen for the photos:

Crumb for Comfort, The Future of Music, Woodland Creatures and Feral Mouth at
Geldeston Locks

Set 1 km down a rough track on the banks of the Waveney, the Geldeston Locks, a
former wherryman’s pub must be one of the quaintest, most atmospheric pubs in
the area. It also serves good food and a well kept range of Greenjack beers, which
only adds to its attraction.

What a great place to see some of the best of East Anglian music, put together by
Crumbs for Comfort’s Ben, who I believe is now Events Manager for the pub. Ben,
with several Crumbs opened the evening with a lively and enjoyable set. Although
I prefer the complete Crumbs for Comfort with their three vocalists adding variety
to their material this slimmed down incarnation was a more than adequate
substitute. Ben’s passionate vocals were ably backed tonight by drums, keyboard
and bass. I really like the band’s sense of place and local history summed up well
in the paean to Lowestoft’s maritime history, ‘Lowestoft Bay’.

Dan and Will of The Future of Music were next up and their bouncy, irrepressible
stage presence and lively, articulate songs were well received by the growing
audience. I had been thinking only earlier that day that one of the things missing
from the music scene at present is protest music. Well, The Future of Music fill
that gap with a well judged Billy Braggesque earnestness. Two voices, one guitar,
something to say, great stuff. 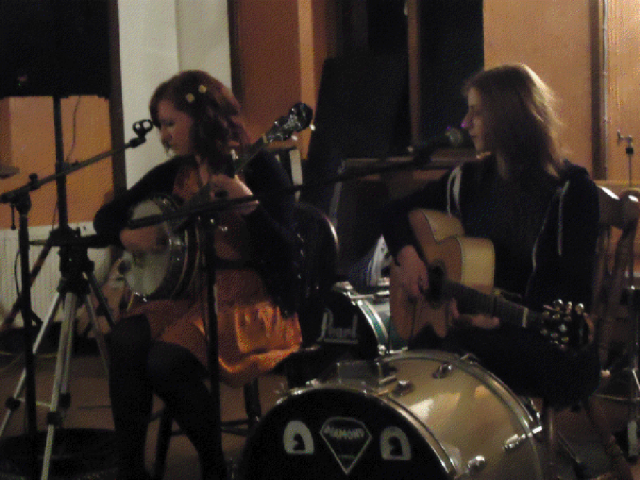 I’m always pleased when I spot Woodland Creatures on the bill of any gig I’m
attending. Lizzy and Christina seem to be going from strength to strength and
their own songs stand very strongly alongside some interesting covers. Two
excellent voices combine to produce lovely harmonies while the combination of
guitar, bass drum, flutes, bhodran and banjo enables them to vary their style from
low-fi folk through Celtic jigs to Bluegrass. For me they excel particularly on the
bluegrass, possibly Feral Mouth influenced? songs such as the beautiful ‘In the
Country’.

And so on to the force of nature that is Feral Mouth, headlining tonight’s show.
What can I tell you about this band that hasn’t already been lovingly described
on this blog before. The Ferals are simply one of my very favourite bands and
having followed them for a while now I can tell you that at present they are at
the very top of their game. At 1 ½ hours this was by far the longest I’d seen them
play and the pace and quality never slipped for a second. Roaring through old
favourites such as ‘Darling Corey’, ‘Roll out the Black’ and ‘Contradiction’ theirs
is an irresistible souped up, Bluegrass/Folk demon of a sound that I find it almost
impossible not to dance to, even tired as I was this evening.

This is another band who combine excellent covers with original material of a
very high standard. Songwriter Jaype possesses an increasingly sure lyrical and
melodic touch and is ably backed by a wonderfully talented band. Importantly,
newer songs such as ‘Nelson’s County’ and ‘Tatters’ stand very well alongside the
established favourites.

On a personal note, ‘By the Grace of Genghis’, a moving song about accepting the
inevitability of death with grace and dignity, continues to be one of my favourite
ever songs. Recently restored to the set by popular demand (I think), I hope it
remains forever a fixture. In the unlikely event that anyone reading this blog has
not yet seen the Ferals I would recommend you make every effort to see this
marvellous band as soon as possible. (Next date: 9 May at Open)