It feels a very long time since I heard some live music in the afternoon with sunshine streaming in through the windows, but today, albeit briefly as far as the sunshine went, that is what we were gifted at BFR in the NAC Bar.

Alex Carson and Bare Feet Records are doing absolute wonders for the local music scene, promoting new bands, releasing tracks and samplers at fantastic prices, thanks to Alex I have discovered so much music that I now cherish closely and dearly. The latest of which is his own band, Wooden Arms, whom if you have read my words before you will know I have seen many times, in fact, as Lydia was not present today I do believe I now match her attendance of Wooden Arms gigs!

Amusingly advertised in the morning on Facebook as “Wooden Spoon”(!) the band today was a three piece, all of them sporting colds, which did not hinder their performance in the slightest, well almost. Jess, bathed in occasional sunlight played beautifully on violin and the only slight hiccup came right at the end of a lovely set, where at the end of a new track Alex stumbled and ad-libbed “He’s fallen at the final hurdle, the horse has been shot!” 😀 It didn’t make a jot of difference to the enjoyment, and with the heavy colds is totally excused.

The second act was Brother the Wolfe, if memory serves me well (which it usually does not) the last time I saw this duo was at the Milly Hirst EP launch at the Birdcage at the end of last year. I enjoyed then their brief set with beautiful tunes and harmonies, which inevitably draws some comparisons with Simon & Garfunkel. Their voices compliment each other perfectly, accompanied by just a guitar, what appeared to be a toy-like glockenspiel, and occasional harmonica it was perfect for a chilled out coffee and music lunchtime in the Arts Centre Bar. 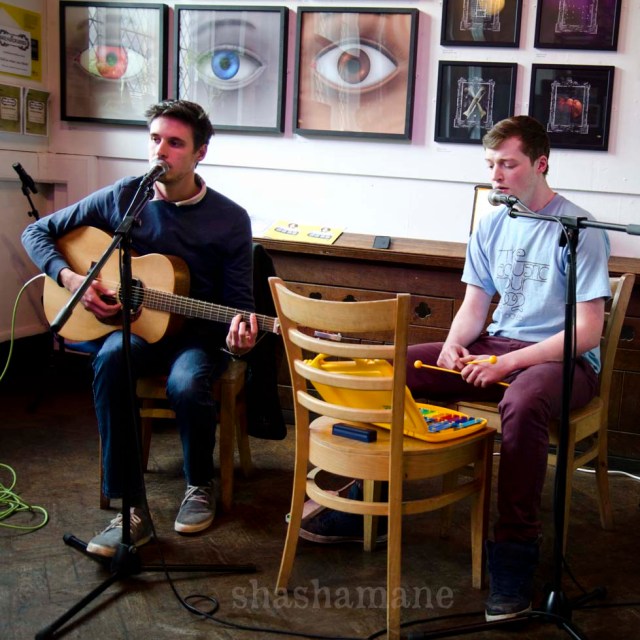 I had not heard the solo work of Rory Hill before, so did not know what to expect, but was immediately drawn in to the set and the mood. By his own admission most of the songs were about break-ups and failed relationships but how positively he channels the accompanying emotions. Beautifully dark and haunting, melancholy and at times almost bitter feelings articulated in song. I especially liked the penultimate song of the set, with a typically memorable line of “I’ve lost all memory of what I was before … can you help me”, despair and sorrow in equal measure. He claimed to be hungover but still managed to impress me with his expressive voice. I’ll listen out for Rory.

And finally, once again the amazing, beautiful art of Milly Hirst. I cannot add much more to my previous words, but she really was on form again this afternoon. Fresh from a new tattoo she opened the set with Book or a Film, and much to my delight soon after, You are Lovely. I think I was not alone to be delighted, so was the sun which broke through with perfect timing, illuminating Milly at the very moment when she sang the line “The light is perfect, on both sides”. I think this is the song which when I heard her sing live for my first time, had me truly captivated. The gentle, lullaby-like sound of the guitar, allowing her soothing voice to express this wealth of emotion, this is artist as songwriter for me.

She mentioned a period of writer’s block which she is coming out of, and the evidence that she has come out of this was there for us to hear again today. As well as the recent Ted Hughes-inspired Cherry Tree we again heard the new song for her sister “And oh my kin, the light within you will blossom like spring”, and The Illuminated Man, showing that any writer’s block is now well behind her. Oddly enough, after hearing the Illuminated Man during the week for the first time, I was put in mind of tattoos, probably because I caught the line “The world on his skin”, so it was amazing to discover yesterday that Milly herself has just had some of her drawings made as tattoo, one of which I am sure I saw was a globe.

Milly Hirst on form in a sunny NAC bar on a Saturday lunchtime with a few coffees and an attentive audience, like an oasis in the middle of a hectic day. Bliss! 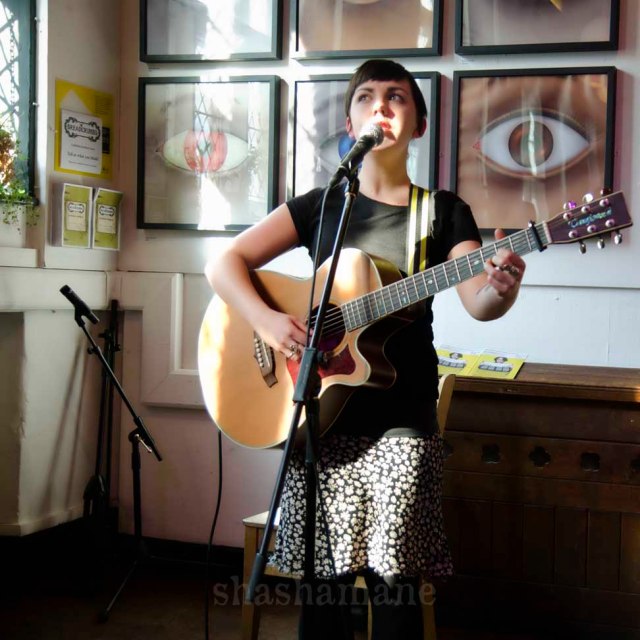