What an eventful Sunday this was! The Art of Norwich 27th exhibition was due to set up and open today, and a new coffee house, The Dandy Horse was also launching with some live acts playing in the evening.

In the morning though, I had to set up my wall space for the latest in The Church of Art’s excellent Art of Norwich series of exhibitions, run meticulously by the dedicated Ruski. The Church of Art is located on St Benedict’s street, it is otherwise known as St Margaret’s and is opposite House cafe. The exhibitions are particularly good for local artists who are taking their first tentative steps towards showing their work to a wider audience where it is cheap and friendly, but a great many of those who have exhibited here love the atmosphere, the location, the support, independence, and the total lack of pretence remain loyal to these roots and return again and again. It is an ideal way to learn about exhibiting and to build confidence, and was where I too first exhibited and have made some very good friends through this.

Anyway, I set my space up with a mixture of canvases, posters and some mounted prints for sale in a browser, and made my way home before returning for the opening in the evening. Ruski had arranged for some musicians to play, always interesting to discover some new acts in this way, and today was to be my first time of hearing Sanguine Sea, a Norwich-based singer from Dublin (appropriately it was St Paddy’s day) who was tonight joined by John Mudd of Feral Mouth on cello and Rupert Engledow on fiddle. They played a lovely set, including some in Gaelic, plus a few jokes not often heard in a church! I will look out for them all again. 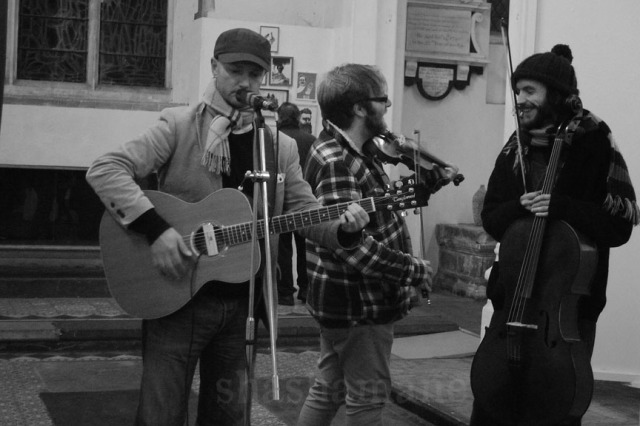 Further musical entertainment was provided by Andy Butler, playing guitar with some very clever and interesting use of loops.

John had told me that he was also playing with Feral Mouth a bit later in the evening, so once the open evening was drawing to a close I decided to step back out into the pouring rain and make my way to the newly opened Dandy Horse coffee shop in Magdalen Street. It was on my way that I could not resist taking this snap of a beautiful old car on St Benedicts. Within hours of posting it, its owner had found my photo and informed me it was for sale 😀 Such a Norwich moment!

another rainy night in norwich

I wasn’t entirely sure exactly where on Magdalen Street the Dandy Horse was, but felt sure I’d quickly find it, and sure enough I was drawn to the beautiful new signage and the muffled but unmistable sound of Feral Mouth playing within. I quickly followed my ears and made my way upstairs to where the band were playing, and although the room was not especially large it was PACKED! Absolutely full to bursting and nobody could get in until someone left so crammed and hot was it. Well, I would listen anyway but first made my way back downstairs to get a bottled beer. I was really struck by the layout and decor of this place, a lot of thought and effort has gone into this, with very much a bicycle workshop theme. That may make it sound a bit like the Bicycle Shop but that would not be a fair comparison as they are totally different in style. I returned upstairs to listen to the Ferals, I still could not get into the room so listened with the few others doing the same thing at the door. I tried and was assisted with getting a photo or two but it was just so jam packed and hot that this was near impossible, and besides, it was so hot my camera lens was totally steamed up with condensation.

Apparently the Woodland Creatures, Georgia Shackleton and Addison’s Uncle also played as part of this Stacked! event, but sadly I had missed them all. There was such an enthusiastic response from the crowd to the Ferals and a really lovely atmosphere. I eventually managed to get into the room for the last song or two, and adored the Belleville Rendezvous projection playing alongside the band, and the general theme of this for the whole venue. A lovely little coffee house which I will definitely return to, both for coffee and bike servicing!

peds, in perfect synchronicity with the belleville rendevous projection, at the end of the ferals set

All too soon it was 10:30pm and the Dandy Horse was closed for a well-earned rest, so some of the Ferals, and a few others of us made our way to the Doghouse for a chat and a final drink. A most unexpected night, and a very busy Sunday night in this increasingly vibrant and happening city of ours.

video of the end of the feral set