Another Norwich band who have recently come to my attention are the Matchbox Heroes. Having seen their name on some gig listings recently, I this weekend had a chance to listen to some of their work. From reading their profile I learned that they were formed in 2012, on first listening I was very impressed with their sound and songs, but for a band barely a year old this is even more remarkable. The songs are immediately catchy and infectious, with some lovely melodies and musicianship, at times making me think of ’80s power pop indie bands, which despite the reputation of that decade, did include some great stuff on the indie scene.

The band are currently a duo of guitarists, with plans to recruit a full band, the singer has a pleasing effortless quality to his voice and he has surely sung before, delivering the vocals with a confidence and ease. There is also, not surprisingly, a good guitar, almost indie/folk sound to their work, not a million miles away from Norwich’s own Port Isla. 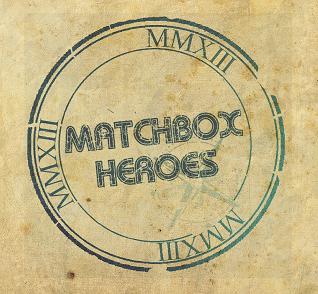 They have recently released their first EP and I am sure very few listening for a first time would guess it was a band’s debut release, such is the confidence and professionalism around it. Apparently they have had some guidance from Dan Wilson, of Adele fame, which has perhaps benefited them in this.

Another thing to impress me about them is the polished and full sound of their production, very impressively it is self produced and mixed! They cite their influences as bands ranging from Feeder, Goo Goo Dolls, Snow Patrol and The Police. I think this could be yet another local band with great promise and potential, and I look forward to catching them at one of their forthcoming gigs to hear them live for the first time and writing more about them.

Please check out their sites:

Biography
Matchbox Heroes were formed in 2012. Band mates Andy and Chris are familiar faces to the Norwich music scene having been in various bands over the last few years. Influenced by bands ranging from Feeder to the Goo Goo Dolls, Snow Patrol to the Police, MH have recorded their self titled début EP with the looks to create a stir in the music industry. The record bridges the gap between the blossoming English acoustic scene and the energetic pop-rock sounds of the American top 100. The band combine catchy melodies and intelligent lyrics with toe-tapping, sing along anthems.

The EP was recorded, mixed and produced by MH and this only adds to the unique sound the band are aiming to produce:

‘With some guidance from Dan Wilson (of Adele fame) and countless late nights producing and re-working, we are really hoping that the songs get heard and most importantly get enjoyed!’ – Chris

‘Hopefully there will be a song on there that speaks to you, I think that’s what it’s about, people enjoying the music!’ – Andy

The band are presently gigging with two guitars around the UK to promote their EP but will be looking to eventually tour as a full band in order to offer the full live sonic version of ‘Matchbox Heroes’. Have a listen on-line to the songs, grab a copy of the EP at a gig and keep checking back for updates, videos and more!